Making a case for community 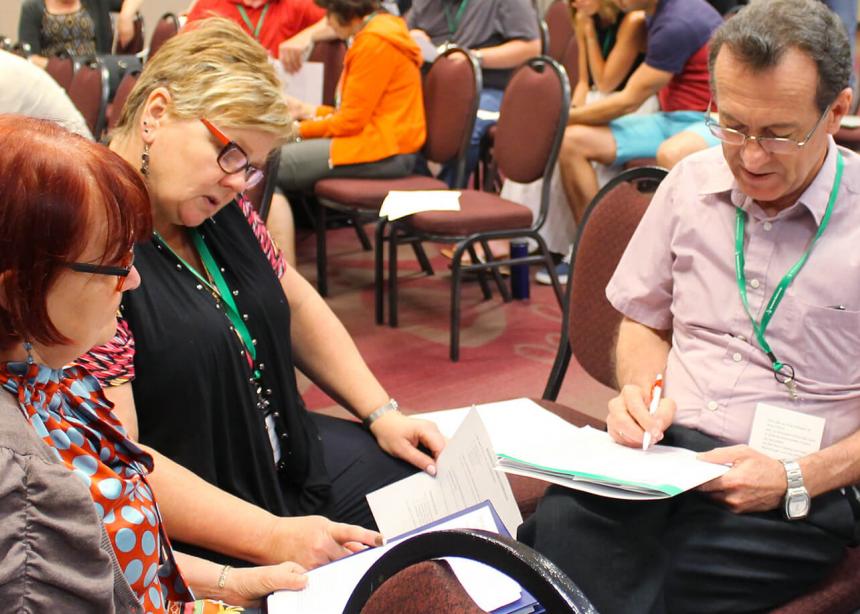 “Too often Mennonites have focussed on disunity.”

With these words, Gareth Brandt began his seminar, “Running towards community,” and he then showed how Mennonite/Anabaptist history is pockmarked with splits and schisms. But Brandt said that he sees these splits as inevitable. “If everybody has a voice, then you’re going to have these splits,” he said of Mennonite polity.

Brandt invited participants to examine the Schleitheim Confession to see if they could discover what the seven articles of the 16th-century document have in common. Working in groups, people noted that each of the articles pertain to community. Brandt said that some people might conclude that, because the confession doesn’t mention anything about God or the Bible, the early Anabaptists must have identified these articles as those which made their denomination distinctive. But he suggested that the early Anabaptists may have seen these seven articles as being at the heart of their faith. “Perhaps these items are what’s important,” he said. “If these tenets are followed, the others will sort themselves out.”

Brandt went on to outline several stories of Anabaptists and Mennonites running towards, rather than away from, community. The first occurred in 1526, when Anabaptists were forced to leave the city of Nikolsburg in what is now the Czech Republic. On the run, the people pooled their possessions in order that all would survive. This group would eventually come to be known as Hutterites. Their movement was characterized by a lifestyle that followed the example of Jesus, pacifism, communal living and hospitality to strangers.

As a second example, Brandt cited the origins of the Conference of Mennonites in Canada at Hochstadt, Man., and Eigenheim, Sask., in the early 1900s. The formation of the conference was a movement towards unity, he said. There was no formal constitution, but their longstanding motto was, “In essentials, unity; in nonessentials, liberty; in all things, charity.”

The founders believed that “each congregation was to be the primary locus of God’s kingdom work,” said Brandt. “The reason for gathering together was so that each congregation would be encouraged in their work.” They intended the conference to be a consultative, rather than a legislative, body, and understood that “disagreement did not imply disunity,” said Brandt.

In his own life, Brandt said that he has always been attracted by the idea of various Mennonite groups coming together. At one point in his life, both Mennonite Church Alberta and the Northwest Conference Mennonite Church of Alberta employed him as a youth minister. Discussions were underway for the two denominations to unite into one area church. Although this plan did not come to fruition, at the time Brandt saw it as an exciting possibility.

Currently, he is professor of practical theology at Columbia Bible College in Abbotsford, B.C., at which Mennonite and Mennonite Brethren denominations collaborate with each other. “I have always been drawn to these experiences,” he said.

Brandt also identified a number of movements that have influenced Mennonites over the years. The mystical or charismatic movement, the progressive movement, the conservative movement and the evangelical movement have all left their imprint on the church. “All four groups of Mennonite make the case that they are the true Anabaptists,” said Brandt. “I say ‘yes’ to all four of them. We need all of those voices to help us to be true to who we are. Each of these streams influences how we read Scripture.”