Living ‘in a prophetic way’

MC Alberta celebrates the ministry and retirement of Donna Entz 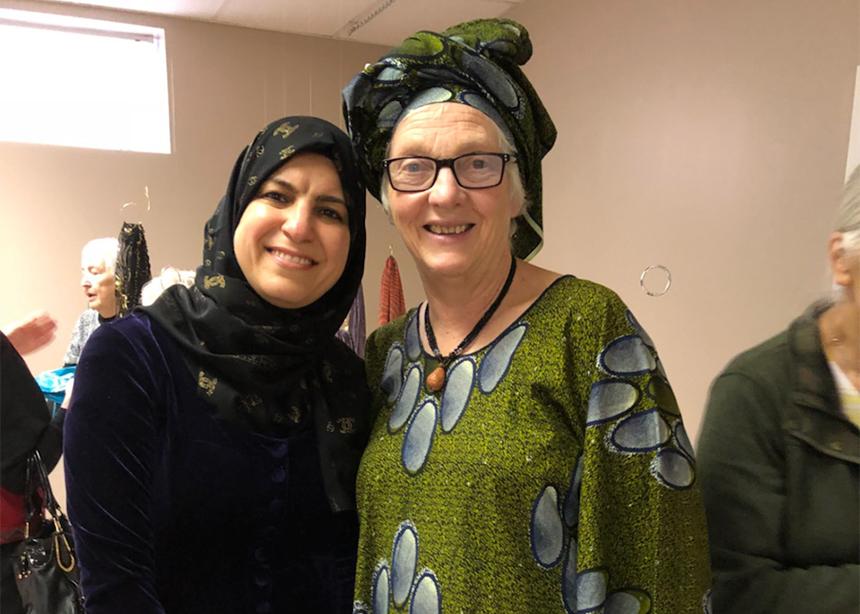 Donna Entz, right, and Doaa Ajani, a Syrian translator, at the “Under Wraps” event held at Lethbridge Mennonite Church in 2017. Mennonite and Muslim women shared about their experiences with head coverings. (Photo courtesy of Suzanne Gross)

Mennonites across Alberta know her. Her heart for Muslims and those who are newcomers to Canada is well known. She has fed hundreds of refugees and immigrants over the past decade in her little apartment, which is situated in a low-income, multi-ethnic neighbourhood in North Edmonton.

She is Donna Entz, Mennonite Church Alberta’s director of the North Edmonton Ministry. After 11 years of service in Alberta, she and her husband Loren have decided to retire.

On June 27, Mennonites and guests gathered on Zoom to celebrate her ministry with Muslims and newcomers. More than 100 people participated.

When Entz arrived in Edmonton in 2010, she did not know what to expect, but she quickly discovered that Mennonites had already created many open doors.

One of her first experiences was at a Somali rally. Waiting for the event to begin, she was suddenly surrounded by 10 Somali men. They had heard she was a Mennonite and excitedly shared how they had all gone to a Mennonite school in Somalia. For this reason, they wanted to know her. Her relationship with the Somalis flourished.

Her philosophy of mission comes from Peacemakers Professing Christ International, a network of Mennonites who engage with Muslims. Its core values, inspired by Eastern Mennonite Mission work in Somalia, were showcased at the retirement event: witness, hospitality, dialogue and peacemaking.

According to Entz, witness was the overarching theme of her work.

She and her husband chose not to buy a car. They talked to people on the bus, invited people into their home, and served the community in many ways, such as teaching English, starting a community garden and participating in community events.

Entz says that Mennonites have repeatedly told her, “I can’t do witness.” She doesn’t buy that, though, saying Mennonites are all witnesses, whether they want to be or not.

At the farewell event, Sabira Devjee, a Muslim friend, affirmed Entz’s witness, by sharing her appreciation for the scriptural-reasoning group Entz began. Christian, Muslim and Jewish holy books were studied together, as participants witnessed to their perspectives through the lens of their faith traditions.

Entz’s witness was strengthened through hospitality. She highlighted the importance of reciprocity, where the focus is not only on serving and helping, but also on giving up control and receiving with humility.

At the event the story of a Syrian family who flew to Canada, becoming refugee claimants upon arrival, was told. Students in her English-as-Second-Language (ESL) class were invited to their home for a meal. When pita bread was served, the husband picked up the bread and fed it to Entz like a child. After the meal, pictures were shown of the violence and destruction in Damascus while the wife wept.

On a subsequent road trip to a Mennonite Central Committee (MCC) Alberta meeting, Entz and MCC worker Jim Shantz discussed how to help sponsor Syrian refugees. They dreamed of the synergy possible if Mennonites and Muslims worked together to help bring these refugees to Canada, and they presented this idea to MCC. The result was fruitful cooperation.

The final dynamic of her ministry was peacemaking. She told of a newcomer who attended her class. It was the first day of Ramadan, and the woman made some strong, negative comments about fasting. “It’s wrong to fast like that,” she said.

Entz invited Muslim students to share why and how Ramadan was important to them. At the end of the class, the newcomer who had been critical was smiling, saying, “This was really good.”

After a decade working with Muslims and Mennonites, Entz believes that engagement strengthens everyone, and that relating with the religious “other” deepens one’s own faith.

The Entzes plan to move to Winnipeg, where they will share a 100-year-old house with an alternative community and live closer to their adult children.

At the MC Alberta farewell, Omar Yaqub, a young adult, said, “You’ve taught me what service means and how to live in a prophetic way.”

Participants were invited to donate to refugee settlement funds in Entz’s name through MCC Alberta or through the Islamic Family and Social Services Association. 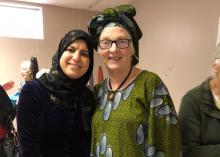 Donna Entz, right, and Doaa Ajani, a Syrian translator, at the “Under Wraps” event held at Lethbridge Mennonite Church in 2017. Mennonite and Muslim women shared about their experiences with head coverings. (Photo courtesy of Suzanne Gross) 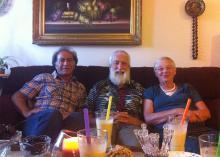 Loren and Donna Entz, centre and right, receive an invitation to the home of Iranians Behrouz Delavari, left, and his wife, Mehri Davar (not pictured). (Photo courtesy of Suzanne Gross) 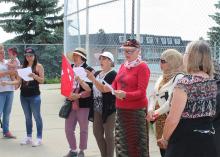 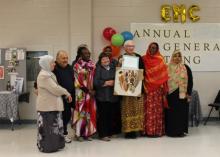 We are grateful for your ministry which God has blessed among the Muslims and various Mennonite Associations. The move sounds exciting for seeing your children and grandchildren frequently. New relationships await at your new home. We wish you well. God bless your time in August, packing and moving. May the health situation continue to improve and allow mobility among the Provinces.