The life of an MCC thrift shop manager 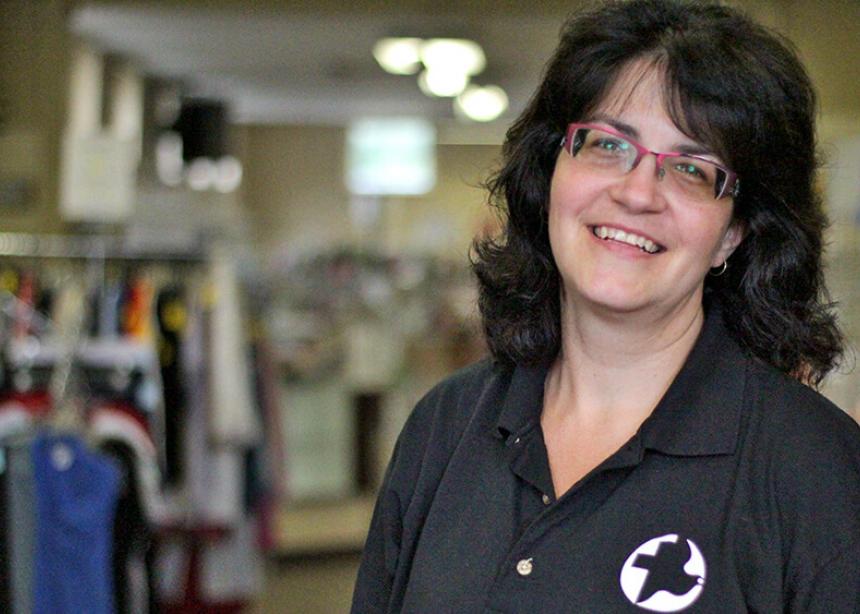 <p>Karen Steckly manages the MCC New to You shop in Milverton, Ont. (Photo by Katie Steckly)</p>

There’s never a dull moment at the thrift shop. Whether it’s a truckload full of donations five minutes before closing or a till that needs balancing, Mennonite Central Committee thrift shop managers are always on the go. But sometimes there are unexpected duties to attend to at the local thrift shop. Just last week, my mother who manages the Milverton, Ont., MCC New to You, experienced one of the best, most story-worthy ones yet.

It was a typical Saturday when my mother found a young gentleman, looking quite flustered, standing at the counter in the store. Immediately my mom noticed that he wore hearing aids in both ears. After some broken conversation, and some passing of papers with written messages, Mom discovered that he was looking for 25 Main Street South, Milverton.

“I’ll show you where it is, it’s just down the street,” she offered, and walked him to what she assumed was his destination. By this point, Mom had accumulated some information about her guest—his name, which for our storytelling purposes will be Chuck, and that he was from Mississauga.

When they arrived at that spot on the street, he protested. That was not the place he was looking for. Eventually after a bit of confusion, my mom went with Chuck to his car which was in a parking lot across the street from the shop. He wanted to show her his GPS, and the address that he was really looking for. My mom confirmed, yes, the address in his GPS was 25 Main Street South, and yes, the house she showed him was 25 Main Street South as well. Still frustrated, Chuck offered my mom his cell phone, and the number of the friend he was supposed to meet at his destination. She dialed.

“Hello, I’m Karen Steckly, and I’m here with your friend Chuck. He’s trying to look for the place he’s supposed to meet you, where are you?”

“About an hour and a half away from where you are!”

This is where, during my mother’s telling of the story, my jaw dropped. If you don’t know the area, I’ll give you a brief run down. 1) Mississauga and Milton both are far enough away from us in Milverton that we consider them both to be basically Toronto. 2) To get to Milverton from Mississauga, you usually would pass through Milton on the 401. 3) There are lot of town names involved with this story that start with ‘M.’ But back to the story...

At this point in the conversation, Mom noticed that Chuck had become a bit agitated. He was trying to talk to her while she was on the phone and began motioning to his fuel gauge. Empty.

In an effort to bring some order to the situation, my mom asked the friend on the phone for the proper address to input into the GPS. She wrote it down, and Chuck entered it. She wrote, “Gas?” on another piece of paper, and Chuck pointed to his pockets and shrugged. She wrote, “Visa?” and he shook his head.

Chuck was evidently very anxious now, so my mom said, “Just wait five minutes,” and held up five fingers, “I’ll be right back.” My mom collected her purse and keys and returned to the parking lot. They went to the gas station together, where she pumped fuel for him until the tank was full and sent him on his way.

“Thank you, thank you!” he said. He hugged my mom and wrote on a small piece of paper, “I’ll pay you—Friday.”

She took that paper from him and wrote in response, “No need to repay me—just do a good deed for the next person who needs it.”

I have always felt that MCC thrift shops serve many purposes in the mission of our faith. Despite the obvious generating funds for relief work at home and far afield, thrift shops also create an accessible and affordable resource of clothes and household items for lower income families. In addition they provide an inclusive space for people to contribute to society and the work of the church, and to find purposeful and fulfilling work. And more recently I’ve learned that the thrift shop is also a place of refuge, or a place to find someone who will show compassion or lend a helping hand.

The managers of MCC thrift shops  serve many purposes beyond what we expect. They often become the hands and feet of the body of Christ in far more ways than listed in the job description.

Karen Steckly manages the MCC New to You shop in Milverton, Ont. (Photo by Katie Steckly)