Letter to the family: A mother’s treasure 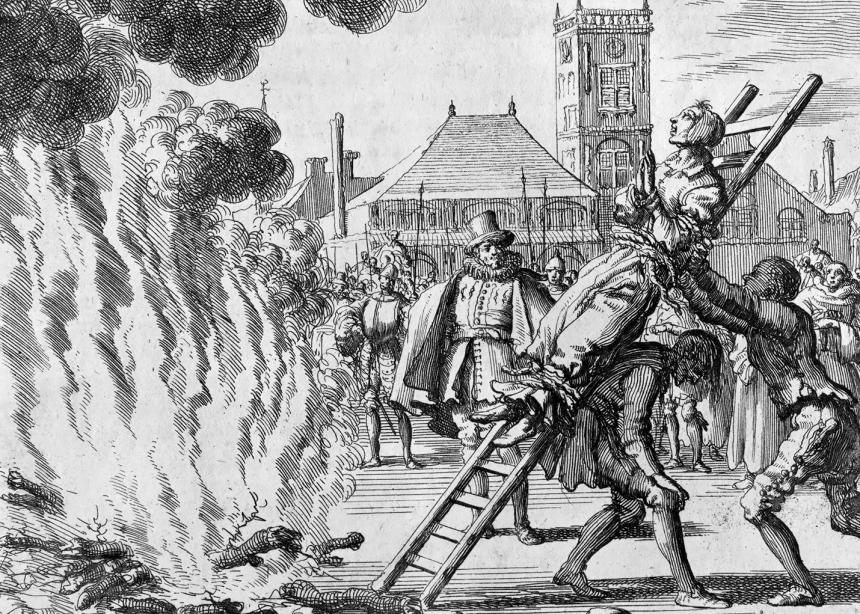 Children are among the most important things given to us in our lives. With this gift comes the responsibility of passing on our faith. This can be a daunting task in a cultural climate that isn’t always friendly to followers of Jesus.

The desire of our hearts
Maeyken van Deventers expresses the desire of our hearts when she writes to her children, “I seek the salvation of your souls; believe me, and no one else, that you may come to me and live forever.” Maeyken wrote this from a Rotterdam prison in 1572. She was one of the female Anabaptist martyrs whose final letters are preserved for us in Martyrs Mirror.

These letters, written by imprisoned wives and mothers facing impending death, show us what they thought was most important: a primary commitment to God that led them to desire their children’s salvation, urge them to fear the Lord, and bequeath them with the true treasure of a mother’s testimony and faithful death.

Family is secondary
These women viewed their families and life together as secondary to their life with God; they would sooner leave their family than leave their faith. Adriaenken Jans reminded her husband that they had built their house on the rock of Christ, and martyrdom was the cost they would pay for their house. This was not a cold-hearted stoicism; great affection and longing was also conveyed.

Janneken Muntsdorp, writing to her infant daughter, expressed how well suited she and her husband were, and that nothing could have separated them except a desire to do the Lord’s will. Soetgen van den Houte’s letter to her children is filled with tearful prayer, loving admonishment and terms of tender affection.

Choosing the narrow way of primary allegiance to Christ was not always easy. Maeyken Wens admitted in a letter to her husband that she was struggling with being thankful for all that was happening to her, and that parting was harder than she had imagined. “Oh, how easy it is to be a Christian, so long as the flesh is not put to the trial, or nothing has to be relinquished; then it is an easy thing to be a Christian.”

Soetgen, whose husband had already been martyred, wrote to her soon-to-be-orphaned children, “When I thought that for Christ’s sake we must separate from all that we love in this world, I committed all to the will of the Lord.” Maeyken Wens’s final letter to her son, written just before her death, informs him that her struggle has been met with God’s grace: “The Lord takes away all fear; I did not know what to do for joy, when I was sentenced . . . I cannot fully thank my God for the great grace which he has shown me.”

Encouraging a death-defying commitment
Out of their own death-defying commitment to God, these mothers urged their children to a similar decision. In their concern for their children’s salvation, they encouraged them to learn to read and write, because in this way they would gain understanding and wisdom. The importance of this for the Anabaptists of that time is evident in their Scripture-filled letters: in reading you can know the Scriptures for yourself and come to an understanding of salvation.

Six months before her death, Maeyken Wens urged her oldest son, Adriaen, to begin to fear the Lord, being old enough to perceive good and evil. She pressed him to join himself to those who fear the Lord, and to write her with his decision. She wanted a better letter than the last two!

The fear of the Lord
The fear of the Lord is a predominant theme in these final letters. Whether writing to believing children, or to those “of the flesh,” the mothers commended the “narrow way.” Anna of Rotterdam warned Isaiah that this way is found by few and walked in by even fewer, since some regard it as too severe, even though they see it is the way to life. “Where you hear of the cross, there is Christ; from there do not depart.”

To fear the Lord is to follow the example of Christ and others who have suffered. Persecution is to be expected. Do not for this reason fail to join the fellowship of true believers.

To fear the Lord is to obey. The children were to obey those who took care of them now, as long as it was not contrary to God. Their mothers instructed them in the specifics of speech, diligence, prayer, simplicity and generosity, among others. With their own lives as examples, the women encouraged their children to forsake pleasures of this world for eternal reward. Soetgen wrote, “We are of such good cheer to offer up our sacrifice that I cannot express it. I could leap for joy when I think of the eternal riches which are promised to us as our inheritance.”

Testaments are our inheritance
And so they wrote their final testaments, viewing the testimony of their word and death as the true treasure they left with their children. Soetgen recognized this was not a memorial of silver, gold or jewels, but something more lasting; if her children paid heed to this testament, they would gain more treasure by it than if she had left them perishable riches.

The letters of these martyrs are also our inheritance. They offer us wisdom for ordering our lives and passing on our faith. We are left with questions of priority, vision and urgency.

What is our vision for our children or those we influence? Recently I took some time to think about this vision, to write it out, and to begin praying it. The next step is to share it with the ones I carry in my heart.

Do we sense the urgency?

Do we sense the urgency of these life choices? These women viewed every choice through the lens of eternity, as life-and-death matters. Do we shy away from this “narrow way” talk, desiring a less demanding portrayal of faith? In emphasizing the love of God, has our pendulum swung too far?

What is the “narrow way”? For these women, one expression of it was choosing adult believer’s baptism as a sign of their loyalty to Jesus, knowing that this baptism marked them for a baptism in blood. They did not shy away from expressing the cost to their children but fearlessly called them to follow in the same path. In our lives, what are the “narrow way” choices we are making and calling our children to?

Recent research encourages us with the fact that the spiritual vitality of parents contributes to “sticky faith” in their children. Let these women’s examples embolden you to speak your faith and live it before your children as the richest inheritance you can leave to them.

Professor Arlene Friesen teaches courses on Bible and worship, and serves as registrar at Steinbach (Man.) Bible College. She is a part of Morrow Gospel Church (EMMC), Winnipeg.

Who were these women?

1. What are some of the life lessons or guiding principles that you learned from your parents? If you were to write a farewell letter to children you love, what would you include?

2. If you had to choose between caring for your children and serving God, which would you choose? How do we stand up for our faith and for our devotion to God in today’s culture? Have we lost respect for a “death-defying commitment to God”?

3. Arlene Friesen writes that the 16th-century martyrs did not blame God for the persecution they faced. Is our society more inclined to blame God when bad things happen? Has our pursuit of pleasure dulled our sensitivities and made us less willing to give our highest priority to God? 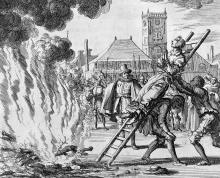 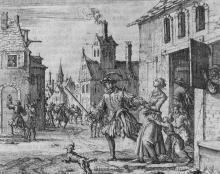 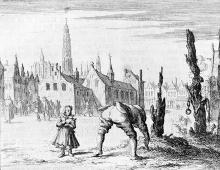 The sons of Maeyken Wens search for her tongue screw among her ashes in Antwerp in 1573. (Etching by Jan Luyken, from Martyrs Mirror by Thieleman J. van Braght, Published by Herald Press, Harrisonburg, Va. Used with permission.)