Lamenting the ‘discovery’ of North America

New play takes a humorous look at the Doctrine of Discovery 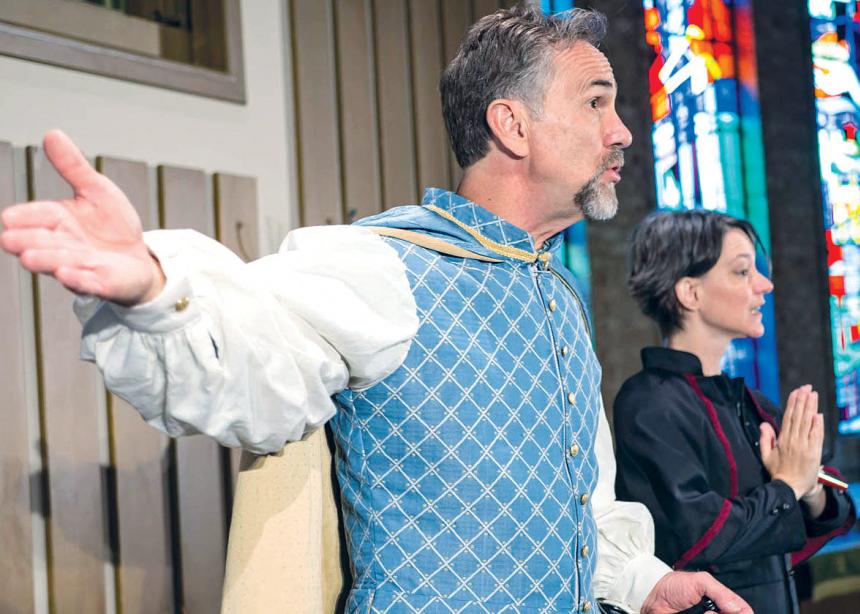 An American theatre company with Mennonite roots performed its newest production, which explores indigenous-settler relations, to a capacity crowd in Winnipeg earlier this summer.

Hundreds gathered at Home Street Mennonite Church on June 28, 2017, as Ted and Company TheaterWorks presented Discovery: A Comic Lament. The play explores the Doctrine of Discovery, the legal framework dating to the 15th century that gave Christian governments moral and legal rights to invade and seize indigenous lands and dominate indigenous peoples. The doctrine was first repudiated by the Catholic Church in 1537.

It was the third time the company had ever performed the play, which was written by Alison Brookins, a recent graduate of Anabaptist Mennonite Biblical Seminary.

Directed by Phil Weaver-Stoesz, the production consists of 13 different scenes—some connected and some not—each dealing with the Doctrine of Discovery. It stars Ted Swartz and Michelle Milne.

Speaking by phone prior to the Winnipeg performance, Brookins said she was inspired to write the play after talking with a friend who is a member of a coalition of Anabaptists in the United States who are working at dismantling the Doctrine of Discovery. “I . . . believe strongly in the power of comedy to help us have difficult conversations, and this is one of the more difficult conversations in existence,” Brookins said.

Swartz, who founded Ted and Company more than 20 years ago as a way to use humour and storytelling to talk about issues of faith and social justice, is excited to be performing Discovery. “I’d been given some encouragement to write a show on racism specifically, and I didn’t feel I had the ca-pacity to take [that] on at the moment,” said Swartz, who was last in Winnipeg in May, performing his one-man show about mental illness, Laughter is Sacred Space.

“While [Discovery] isn’t specifically about racism, it is a conversation that gets at something that’s even a little bit deeper,” he said. “There are a number of people who have said this issue . . . undergirds a whole raft of injustices that North Americans have been involved with.”

The play uses a variety of theatrical styles, including dance and slapstick, throughout its 13 scenes. That variety is part of what attracted Milne to the project. “It’s a great opportunity as a performer to engage in issues I care about, with people that I like and styles that are fun to play with,” she said.

Many stops on the play’s premiere tour, including Winnipeg, featured a talkback session after the performance led by restorative justice scholar Elaine Enns. This allowed audience members to share their reactions to the play.

Swartz, Milne and Brookins have been using some of that feedback to refine the material for future performances.

Brookins said that the phrase “a comic lament” may not be as paradoxical as it initially appears to be. “They hold together a lot more than we think,” she said, adding that laughter can open people up to new ideas and ways of thinking. Taking time to lament is important.

Lamenting changes how one processes an experience, she said. Typically, the Mennonite impulse is to take action right away. The play asks the audience not to do that.

“Lament is something that we skip over very often in our North American culture,” she said. “Lament is sitting in the ashes for a little while. . . . Lament is railing against injustice, and lament is petitioning for things to get better. But you can’t really know how things could get better if you don’t take time to sit in that lament.”

Swartz said he hopes the play leaves audience members wanting to explore the topic further. “There are no clear answers in it,” he said, “but we hope you become much more curious about this issue.” 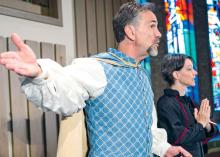 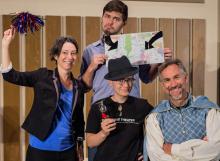