It’s time to do ‘something constructive together’ 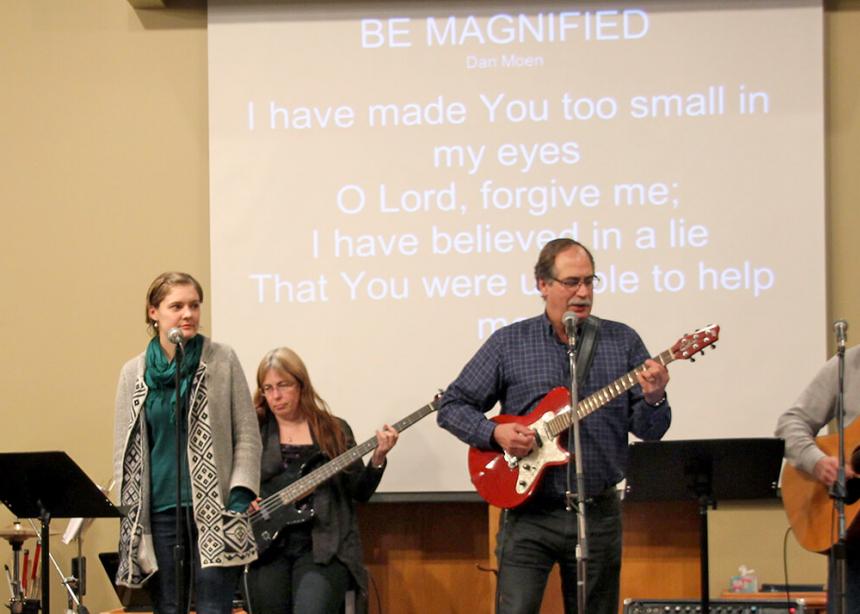 Evangelical Anabaptist Partners (EAP) is a loosely affiliated group of pastors and lay people from Mennonite Church Eastern Canada who have been gathering regularly for worship, mutual encouragement, fellowship and discussion about their mission in the world.

At a recent monthly Sunday evening gathering at Community Mennonite Fellowship in Drayton, Ont., Craig Frere, the host pastor, challenged the 90 people present to have a faith that extended beyond Sundays into the whole week, “being good news to others” and “being the church on the way” through life.

Those gathered shared good news stories of where they had seen God at work—people becoming Christians, and Christmas hampers being handed out—and then offered prayers of thanksgiving. After singing songs filled with the theology they embrace, they recited the Apostles’ Creed. Afterward, they continued to encourage each other to be God’s people in their own communities.

EAP formed after several of its members participated in Evangelical Anabaptist Network (Evana) meetings in Indiana and Ontario last year. While a few have joined or plan to join Evana, most felt that its quasi-denominational format wasn’t a fit for them.

Instead of needing a new denomination, what they wanted is a place where they do not feel they have to defend their basic beliefs:

EAP’s leadership team has held several lengthy and honest meetings with area church leaders, in which they expressed their basic beliefs and some of their concerns for MC Canada.

According to Jantzi, in four hours of meetings, same-sex issues and the Being a Faithful Church process were not mentioned. Instead, discussion centred around issues of biblical authority, the Confession of Faith in a Mennonite Perspective, and how far pastors can diverge from traditional theology before they would not fit into MC Canada.

David Martin, MC Eastern Canada’s executive minister, says that EAP has much to offer the wider church, especially as a reminder to “share faith [and] to be a Christian presence in a secular society.” He says he hopes that “those questions would continue to be asked by everyone, spurred on by EAP, and from different experiences. Society is changing; the church is changing.”

Martin believes that this is uncharted territory for the church. “How is the church relevant? What does a faith-based worldview do today? How do we serve people who are looking for meaning?” he wonders.

To help churches answer those questions, MC Eastern Canada has facilitated ReLearning Community groups to help congregations reclaim their mission focus, including one to be made up of EAP members.

But lest some think that EAP’s mission focus is only about spiritual salvation, Legesse says that with the “world becoming a worse place . . . Anabaptist churches need to be assertive.”

Jantzi says he is “encouraged and refreshed being with colleagues of the same mind,” believing that the “Holy Spirit is stirring something” within EAP. “We’ve grumbled for long enough. Now we need to do something constructive together.”