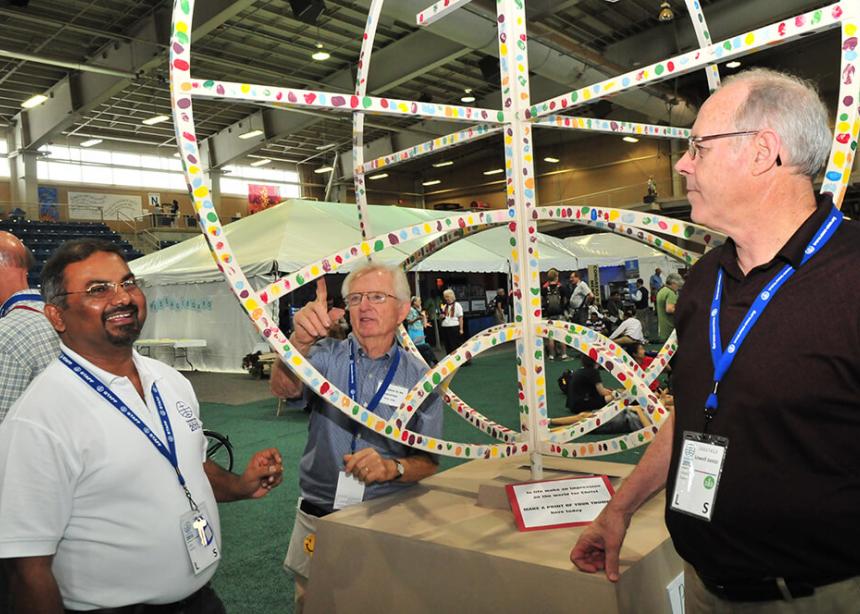 <p>Roland Yoder (centre) puts his own thumbprint on the three-dimensional sculpture of the MWC logo that he designed. Vikal Rao (left) from India was the overall creator of the Global Church Village and Lowell Jantzi (right) helped to carry out the concept. (Photo by Dale D. Gehman)</p>

“This seems like an innocent form of community graffiti,” Roland Yoder said with a smile as he watched the hub of activity around the three-dimensional sculpture of the Mennonite World Conference (MWC) logo that Yoder designed for the Global Church Village (GCV).

Visitors to the village were invited to put their thumbprints on the wooden sculpture located in the GCV square. By Saturday, the last day of the MWC Assembly, the white spokes were covered with colorful prints left by people from around the globe.

Yoder, who spent almost 12 hours onsite each day during the Assembly, observed the transformation in silence. A note pinned to his shirt read, “My voice is on vacation through July.” Yoder is quiet by nature, says his wife, Dottie. But his silence during the MWC Assembly was not by choice. Yoder was recently diagnosed with polyps on his vocal chords, and his doctor prescribed six weeks of silence; this was week five.

“Not a convenient time,” wrote Yoder on the notepad he kept in easy reach. “Thank God for email. When my wife and I made phone calls, we needed two phones. She would talk and I would write answers when necessary, which she would relay.”

The sculpture of the MWC logo was intended to be a focal point in the large equine arena that housed the village. Originally Yoder was asked to design something that could be hung from the ceiling, but Yoder wanted people to be able to touch the sculpture and to interact with the piece in a way that would encourage them to identify with MWC. That led to putting the sculpture on a simple pedestal and the idea of decorating the sculpture with thumbprints.

“A thumbprint is a personal thing,” said Yoder.

Designing the sculpture was only part of Yoder’s assignment. Creating an indoor gathering space for the GCV that evoked the outdoors was his other task. Yoder, a retired art and biology teacher, worked with Wes Neuswanger, a high school shop teacher, and Lowell Jantzi, a builder. The three communicated regularly with Vikal Rao of India, who was the overall GCV coordinator.

The result of their collective creativity was a gathering place at the front of the arena that reminded some visitors of a Spanish village square and others of an African market. Carpets covering the dirt floor followed a color scheme created by Yoder. Area greenhouses provided trees, potted flowering plants, ornamental grasses and bushes that were artfully arranged on the edges of the center green. Benches and wooden lawn chairs offered visitors a place to visit or rest. Empty floor space gave some the chance to lie down for a nap.

Yoder and his crew added touches of Pennsylvania rural life to the GCV. Visitors entered the village via Irishtown Bridge, a covered bridge constructed for MWC by a Lancaster County Pennsylvania Amish farmer and builder. An Amish buggy and a pulley clothesline hung with “plain” clothes were located near the bridge. A 50-year-old John Deere tractor was parked beside one of the display tents.

The Asia tent was one of the busier exhibits thanks to crafts and other activities that changed daily. People frequently waited in line for a henna tattoo. Visitors could pose with a colorful bicycle taxi from Bangladesh and children could crawl inside a grass roof hut.

The North America tent took advantage of the spacious village green for fast-paced games of Dutch Blitz played with giant cards. Dutch Blitz is very popular among the Pennsylvania Amish and Mennonite communities in the U.S. and Canada.

The Global Church Village stage at the back of the arena also benefitted from Yoder’s creativity. He painted cityscapes on several Styrofoam panels that served as the backdrop for the musicians, dancers and other performers. Volunteers, including residents at Landis Homes, where the Yoders live, shared their artistic talents by painting triangular cardboard columns—no two alike—that stood along the sides of the seating area.

Yoder’s voice was out of commission but not his eyes or his ears.

“I experienced a lot of joy in seeing people from around the world enjoying the natural environment which we had the privilege to be a part of creating,” he said.

Connie Faber is editor of Christian Leader. This article was written for Meetinghouse, a group of Mennonite publications.

Roland Yoder (centre) puts his own thumbprint on the three-dimensional sculpture of the MWC logo that he designed. Vikal Rao (left) from India was the overall creator of the Global Church Village and Lowell Jantzi (right) helped to carry out the concept. (Photo by Dale D. Gehman)