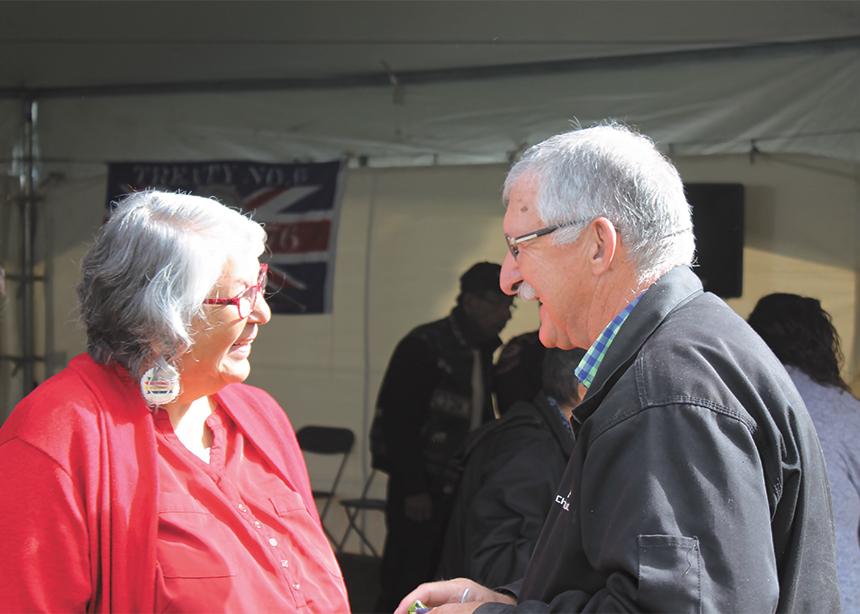 When Leonard Doell was hired as Mennonite Central Committee (MCC) Saskatchewan’s Native Concerns program coordinator in 1996, he was told his job was “to drink tea with elders.” It was a job description he took to heart.

After 24 years, Doell retired in June. On Aug. 21, colleagues and friends gathered on the lawn outside Mount Royal Mennonite Church in Saskatoon to honour him and celebrate his contributions to the work of reconciliation.

Former executive director Bruno Baerg also sees Doell’s work as that of building relationships. “He wanted to walk in solidarity with people,” says Baerg. “He always had a long-term understanding.”

This long-term understanding is best seen in Doell’s walk with the Young Chippewayan people. In 1977, long before his employment with MCC, the Conference of Mennonites in Canada hired Doell to undertake a three-month research project into the Young Chippewayan Band and their claim to land west of Laird, Sask., land that was owned by Mennonite farmers. Doell says this project became “a lifetime story” that he was able to continue working on in his role with MCC.

“Leonard walked with the Young Chippewayan band, trying to understand what they were looking for,” says Baerg. “When people started saying things that got [other] people a little bit hot, he talked to both sides to find out what they wanted.” Doell’s journey with the Young Chippewayan lasted more than 30 years, says Baerg, and was “a key demonstration of how he worked.”

“It would have been enough to deter others,” says Baerg, “but he just kept working. He stayed the course.”

In the early days of his work with MCC, Doell assigned volunteers to a number of gardening projects in northern communities. He also worked with a nurse in Sandy Bay, Sask., to try to build a bridge between modern medicine and traditional healers. Later, Doell worked with Parliament Mennonite Brethren Church in Regina to support the Healing Hearts Ministry for men trying to exit gang life.

“Our people began to learn about residential schools and about their impact on First Nations,” he says. “That really changed our understandings.”

Conversations about land claims and residential schools were challenging, but, says Klassen Hamm, Doell never shied away from them. “He just waded into those things,” she says. “He took another step and then that step would illuminate the next step. He wasn’t afraid of complexity.”

“He cajoled us all—his colleagues, the churches—to take risks for justice,” she says. “He had a long vision.”

Doell is the first to admit that things didn’t always go well. “Efforts toward reconciliation can be very messy and complex,” he says. “Many times we didn’t get things right.” Some of the mistakes had to do with failure to follow protocol and ceremony.

“Gently people reminded me that, when you’re coming seeking guidance, it’s important to bring tobacco,” says Doell. “That was a life-changer in terms of opening doors.” Doell’s experiences with Indigenous people taught him that the process is as important as the end result.

“Nothing went fast,” he says. “You had to be prepared for the pipe. But when we took the time—even when the whole thing took longer—it was a richer experience. Everybody had been heard and validated.”

Another facet of Doell’s work with MCC was helping Low German-speaking Mennonites who were returning to Saskatchewan from Mexico. He found these Mexican Mennonites had much in common with his Indigenous friends. Both groups, he says, “have an appreciation for their own history, culture and language” and both emphasize community, kinship and family. Through broken treaties and broken promises, both groups have experienced disappointment with governments.

Klassen Hamm says that Doell “always put himself in a learning stance.” She adds, “He learned from many different people. He knew that that was his task.”

Baerg notes that Doell never sought attention for himself but rather tried to make sure others were heard. “He wanted people to articulate their own concerns, and he would just work with them quietly and consistently,” says Baerg.

Doell’s own response bears witness to his deep faith in God. “I often felt in over my head,” he says, “but I trusted that God had brought me there for a purpose.”

Related stories:
Expanding the reconciliation tent
Dishonoured treaties are ‘the ghost of our history’
Evangelical path to truth and reconciliation 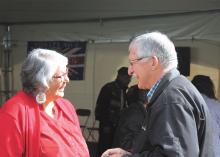 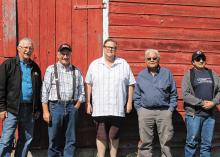 Leonard Doell (far left) stands with Ray Funk, Jason Johnson, George Kingfisher and Marshall Williams at the Spruce River Folk Festival near Spruce Home, Sask. in 2019. The five men were all part of the film, Reserve 107, which depicts the coming together of Mennonite, Lutheran and Young Chippewayan people in 2006. (Photo by Donna Schulz)

Leonard was (and still is) a very good friend of mine. I will miss his visits to the colony. I wish Leonard the best in his retirement.If Leonard cares to visit in the future he will be welcome.
From Bishop Joseph Wurz Hutterian Brethren Church (Dariusleut Conference) Cutknife Sask.