A field of a million prayers 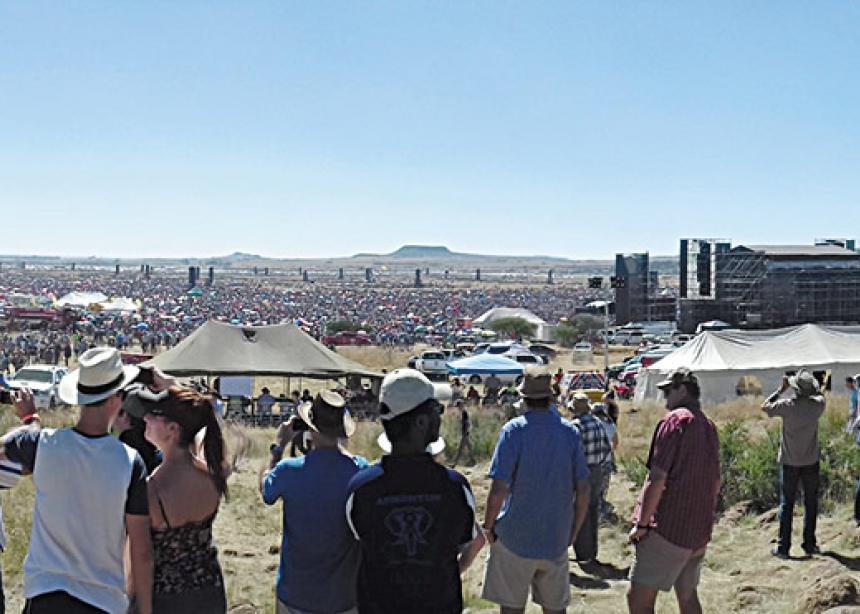 They were called and they came, a million people from every corner of South Africa. They gathered on April 22, 2017, in an expanse of field near Bloemfontein for the largest prayer meeting the country had ever seen.

“[Bloemfontein] is the centre, or the heart, of the nation,” said organizer Angus Buchan as the event began. “And we are asking God to change the heart of our beloved nation, beginning with our own hearts. . . . We will ask the Lord to bring justice, peace and hope in our beloved South Africa.”

South Africa ended apartheid in 1991, but some say the culture it created lingers, creating varying degrees of poverty, mistrust and oppression.

Buchan is a well-known evangelist and writer in South Africa, according to Miriam Maenhout Tshimanga, a Mennonite Church Canada Witness worker in South Africa. Buchan’s faith and a relocation with his family from Zambia to South Africa are chronicled in the well-received 2006 film, Faith Like Potatoes, based on a book of the same name by Buchan.

The prayer service began with the national anthem. “Actually that is a prayer in itself,” Maenhout Tshimanga said. The title means “God bless Africa,” and contains lyrics in the five most widely spoken languages of South Africa.

Following the anthem, Buchan shared a sermon that called on the leaders of South Africa to place God above all else. The event focussed on James 5:16: “Confess your sins to one another, and pray for one another, so that you may be healed. The prayer of the righteous is powerful and effective.”

“We firmly believe that if our nation stands together as one, and calls upon the name of Jesus Christ,” Buchan said, “he will hear us and heal our nation and bring peace to our hearts and homes.”

The prayer meeting came about in response to a video clip posted on social media by a middle-aged farmer.

Speaking in Afrikaans, the farmer noted that God had sent rain in abundance when the country prayed for rain, and he pleaded with Buchan to call the country together to pray for peace. And then he said in English, “Uncle Angus, we are waiting for you. Say the word and we will come.”

The video clip went viral and its message resonated with Buchan. He said he felt the Holy Spirit saying two things: “It’s time,” and, “One million people.” He posted those phrases on social media, and within a few hours he had thousands of positive responses from across the country.

Although the program was scheduled for noon, it was delayed until 2 p.m. to allow people who were still in transit from across the country to arrive.

A million people fell to their knees for a time of personal prayer followed by a communal prayer from Buchan. He prayed that God might end crime and racism in the country. After each prayer item, the crowd shouted a powerful “amen,” and shofars (ram’s horns) echoed across the field.

“I think that everybody went home with a very positive feeling,” said Maenhout Tshimanga, “and I hope that things will change for the good in South Africa.”

Miriam Maenhout Tshimanga and her husband, Hippolyto Tshimanga, serve in Bloemfontein, South Africa, as MC Canada Witness workers. They came in response to an invitation from Grace Community Church, a community of five congregations, to assist with Bible training and leadership development. They also plan to provide entrepreneurship training for members who struggle to earn a living wage. 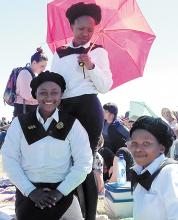