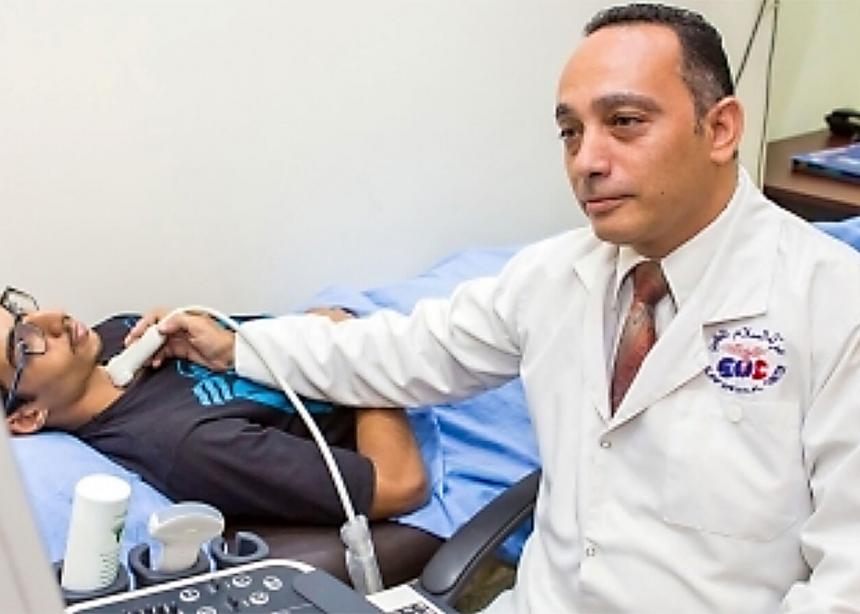 In an attempt to secure the future of the Salam Medical Centre, which he founded in a town some 25 kilometres north of Cairo, Egypt, Dr. Freddy Elbaiady, has embarked on a fundraising tour, taking him to the governments of Canada and the U.S., Switzerland and other Middle East countries, and to the Kindred Credit Union Centre for Peace Advancement at Conrad Grebel University College last month.

The radiologist takes a different approach to medicine. He uses it to bring peace to his divided country, an effort that brings Christians and Muslims together around a basic human need—the health of the body and mind.

He said the Egyptian centre is so well accepted by both religions that, during a recent protest, several young Muslim men surrounded it to protect it from acts of violence. When asked about the cooperation of the different Christian groups, he said the Catholics offer the most services in the country, Protestant groups the next highest, and Coptic Christians the least.

The majority of the population, 90 percent of them Muslim, earn their livelihood from farming, or work as general labourers or as employees of various small businesses in the community. Unemployment, poverty and illiteracy are all significant problems in the area, and most people are not covered by any kind of insurance.

Elbaiady said that he and many healthcare professionals volunteer their time in giving a range of services without government aid. Even though he is a member of the Egyptian Social Democratic Party, the centre receives no help from the government, which, in a struggling political system, has no funding for its indigent people.

He told the gathering at Grebel that the fundraising goal is to expand the centre’s services to offer more education in the health field, including workshops and seminars to related health groups.

Elbaiady was asked by Nathan Funk, associate professor of peace and conflict studies, whether his centre could be used as a model in other Muslim-dominated countries. He responded, noting, “On a speaking engagement to Saudi Arabia, I was asked if this couldn’t be a model to bring the Shia-Sunni factions together.”

He also spent time with Paul Heidebrecht, director of the Centre for Peace Advancement, to explore ways that students could relate to the Salam Medical Centre with special study projects or cross-cultural experiences in the country.