Be a CO at tax time

Based on a sermon she preached at Danforth Mennonite Church, Toronto, on Sept. 18, 2016 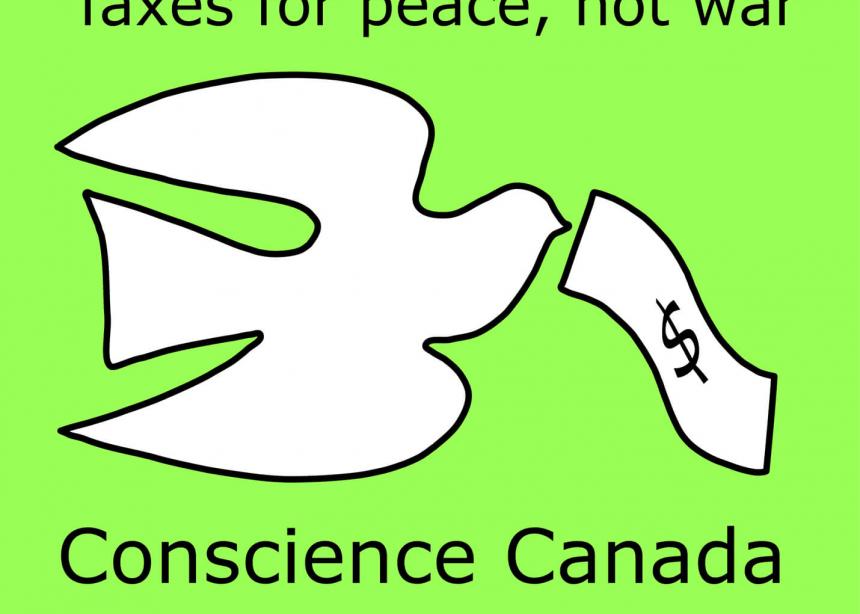 Religious wars raged in 16th-century Europe between Catholics and Protestants. In northern Holland, Jan Smit was captured by the Catholics and was being pressed into service as an oarsman. His captors commanded him to join a crew of prisoners and row across the lake for a battle against Haarlem. But Smit declared, “I have no enemies and cannot in good conscience row the boat so that you can go and fight.”

He was a genuine CORB (conscientious objector to rowing a boat). “He was sharply examined in his faith,” a historian says, “and found to be of the Mennonistic religion.”

Jesus was seriously getting under the skin of the Pharisees and Sadducees with his radical teaching and huge following, and they were determined to get rid of him. So they got some spies to set up a sting operation to entrap Jesus by outing him on the poll tax. This tax required everyone to pay what amounted to the daily wage for a labourer. To devout Jews, it represented the bitter fact that the country was subject to a pagan foreign power. The denarius, the silver coin they had to pay, was idolatrously stamped with the image of Tiberius, and around the edge was an inscription as offensive, probably, as the words “In Caesar we trust.”

So if Jesus would say that it is legal to pay the tax, he would be condoning the sovereignty of Rome and its oppression, and he would lose a lot of his popular support. For Jesus to say that Jews should not pay it would have been seen as insurrection and would have given the authorities grounds to arrest him. The sting was never meant to get an authoritative answer to a vexing question, but to demolish Jesus. Of course, he saw through his questioners clearly and was not about to stumble into their trap. Rather, as in all his encounters, he used the moment to bring these men to self-recognition and a new commitment to God.

The spies approached Jesus with barefaced flattery. “Teacher,” said the spokesman, “we know that you are true, and care for no man, for you do not regard the position of men, but truly teach the way of God. Is it lawful to pay taxes to Caesar or not? Should we pay them, or should we not?”

“Show me a coin,” Jesus responded. Roman currency, as we know from other New Testament stories, was unfit to be used in the temple and had to be exchanged for Jewish shekels when the worshipper wanted to buy an animal or bird for sacrifice, pay the temple dues or make a charitable donation in the temple. The moneychangers had to operate in the Court of the Gentiles so that imperial coins could go no farther into the holy precincts.

We are well aware of how indignant Jesus was, knowing that the Temple Money Mart was taking advantage of people by charging high rates of exchange and inflated prices for the animals, making as much money as they dared. Jesus saw this exploitation of the worshippers under the guise of maintaining purity in the temple as the height of hypocrisy. Now the Pharisees’ ability to readily produce a Roman denarius revealed that their own purity did not reach down as far as their purses.

Jesus’ often quoted pronouncement, “Render to Caesar the things that are Caesar’s, and to God the things that are God’s,” leaves us wondering if the separation between what the state rightly owns and what belongs to God is as clear-cut as it sounds. We don’t have currency to send to the Canada Revenue Agency (CRA) and church currency to send to Mennonite Central Committee (MCC).

But one commentary I read actually says, “Civil and religious duties need not interfere with one another. . . . The two duties are as distinct from one from another as your Jewish coinage is different from that of the Romans.”

Really? Was Jesus telling his followers to pay the tax, turning a blind eye to the violence of the Romans? They would have been all too familiar with the sight of criminals hanging on crosses. And yet, how were Jesus’ followers to behave when a Roman soldier demanded that they carry his gear for a mile? Show that you have no enemies. Be a friend and carry it for two miles. This just might be transformative for the soldier; he might press his next victim into carrying his load for only half a mile.

When Jesus was arrested and put to a torturous crucifixion, he submitted to it, and those complicit—Pilate, the centurion, no doubt others involved—must have inwardly questioned whether God was being truly served as they rendered to Caesar what they believed they owed him.

When Jesus held up the denarius, he was not speaking to people living under a democratically elected government, but to Jews far from the power in Rome who had no say in how their poll tax was spent. We might feel that we have no say in how our taxes are spent, but we are responsible for electing good Members of Parliament and letting them know our minds about social policy and military expenditures. We need to try to get them to work with us to render to God the most peaceful society possible.

What currency does God have for the building up of the kingdom? We are coins for God’s use if we are stamped with the image of Jesus. This minting of the Holy Spirit shows that we belong to God. “We are being transformed into his likeness”
(II Corinthians 3:18).

Bearing the image of Jesus, unfortunately, has cost many their lives. Jan Smit—the 16th century coin—for his refusal to contribute to the war effort, was hanged from the gallows by one leg until dead. There are places in the world still today where conscientious objectors (COs) are given dire punishments for obeying their conscience instead of the governing authority.

For most of us, being a CO does not mean refusing to carry a bayonet rifle and shoot at a soldier in an opposing army. But who is more guilty of fuelling war these days: the military officer remotely controlling the drones or the taxpayer remotely paying for those drones and the bombs they drop on foreign homelands, killing not just the violent, but so many innocents, turning cities to rubble and thousands of people into refugees?

We wish this interminable war would end, yet we go on perpetuating it with our taxes, throwing up our hands and saying, “Caesar will be Caesar.”

Real COs will think about how they can express their objection. Henk Kossen, a 20th-century Dutch COMT, objected to paying the 9 percent of his income tax that went to the military. Knowing there were 572 nuclear missiles placed by NATO in Western Europe, one year he withheld 572 cents, the next year 572 dimes, then finally 572 guilders ($280 USD).

After several years of this, the tax authorities at last were aroused and announced a public auction at his property in Amsterdam. The Defense-Tax-Refusal-Movement saw its opportunity. They publicized the auction widely. Reporters came to interview Kossen about the meaning of the sign on his door. He explained his convictions to his neighbours and invited them to the auction. Supporters brought banners and public-address equipment. Many people arrived. Coffee was served, and Kossen, several MPs and peace-niks addressed the crowd.

When the bailiff arrived, he could hardly get in. The auction began, and a table, piano, desk and TV were bid up one dime at a time by Conscience Netherlands members using re-directed tax funds. At the end of the day, the bailiff got what was owing to Caesar and a hearty “Long live the bailiff” from the crowd.

But not a stick of furniture left the Kossen house. And Amsterdam was better educated about nuclear evils and how to withstand militarism.

For Canadians whose taxes are sent in by their employers, and for people whose income is below the taxable level, Conscience Canada has created a way to protest in the Peace Tax Return: Option A. Those who owe tax are strongly encouraged to use Option B and actually re-direct the military portion to the Peace Tax Fund. To learn more, visit consciencecanada.ca.

The stories of Jan Smit and Henk Kossen are taken from Seeking Peace, Titus and Linda Gehman Peachey’s collection of stories of COs.

Mary Groh is president of the Conscience Canada board of directors. This piece is based on a sermon she preached at Danforth Mennonite Church, Toronto, on Sept. 18, 2016.

1. Have you ever felt called to speak out or take action against injustice or violence against others? What are some examples of campaigns for social justice? What is needed to make such campaigns successful? Under what conditions should Christians bring attention to detrimental government policy?

2. What is your response to Mary Groh’s question about whether war is fuelled more by the military officer or the taxpayer? How responsible should Christians feel about the choices made by their governments? How involved should Christians be in trying to influence government policy?

3. When Jesus was asked if it is right to pay taxes, he said, “Render to Caesar what is Caesar’s . . .” (Mark 12:13-17). How do you understand this passage? What do you think Jesus would say about paying taxes today?

4. If Christians are coins that God uses to build his kingdom, what type of coins should we be? What are some ways that those who are conscientiously opposed to war can express their objections? 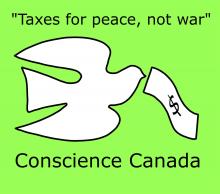