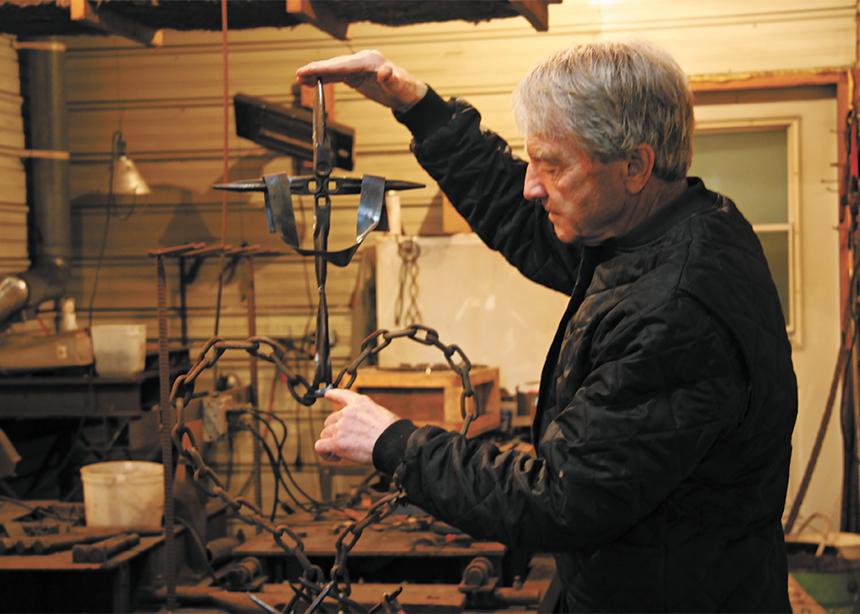 Don Engbrecht has built around 200 works, including this Easter sculpture. (Photo courtesy of Don Engbrecht)

Old agricultural equipment left to languish in junkyards or alongside highways gets a second life in Don Engbrecht’s workshop. He has created approximately 200 works over the 20 years he has been sculpting in Boissevain, Man., with scrap metal and welding tools.

After seven years, he has finally completed his most recent masterpiece. The project, “Shalom,” is inspired by the the book Fingerprints of Fire, Footprints of Peace by Noel Moules, a founding member of the Anabaptist Network U.K. Back in 2013, Engbrecht attended the book’s launch and was captivated by Moules’s writing on shalom, the holistic peace and well-being of all things. After reading the book several times, Engbrecht knew he had to process it through art.

Creating a frame within a wheel rim, he shaped various symbols, like a heart, fish and people, to represent the physical, spiritual and relational pillars of shalom. He will be presenting it to his congregation, Whitewater Mennonite Church in Boissevain, this summer

Engbrecht’s foray into scrap-metal sculpting all started in the late 1990s, when he and his wife Betty transformed their farmyard into Anchorage Gardens, an art gallery-garden hybrid. For 15 years, the couple toured approximately 2,500 people through the gardens. Groomed paths wove between flowerbeds and scrap metal sculptures. Soft petals of purple and red bobbed in the breeze next to steel blooms made from bolts and washers. The Engbrechts showed tourists a new project each year, but they consistently used recycled materials and incorporated agricultural themes.

Engbrecht has always been one to save everything and fix things himself. “My cliché would be ‘waste not, want not’—that’s biblical,” he says. “I believe that recycling and repurposing materials is fundamental to good stewardship of what has been entrusted to us.”

Anchorage Garden tours explored the journey of life through the dozens of galleries on the property, each with a different name and story. Even the paths between the sites, straight and curved, stone and wood, symbolized how varied people’s life trajectories can be.

The paths echo the journey of Engbrecht’s own life. He farmed for 12 years, raising cattle and growing crops, but when the recession hit hard, he went into agricultural retail sales. He then worked in social services for 16 years, serving as executive director of an organization working with adults with mental disabilities.

He slowly started experimenting more in his shop and, when he retired, he developed his career as an artist. “It’s interesting in life how certain things push people in certain directions,” he says. “I’d never thought of myself ever sculpting.”

Yet Engbrecht’s structures are everywhere. Several are installed at Whitewater Mennonite, while 30 are spread throughout the town of Killarney, Man. He has done private commissions and public works, and he is currently in conversation with the International Peace Gardens in Boissevain about an outdoor gallery. His current project for a new assisted-living facility in Boissevain is a sculpture and a five-metre archway built from the chain of a Caterpillar machine, entitled “Life’s Journey.”

“Scrap-metal sculpting is a challenge because you are working with predetermined shapes,” he says. While he does alter the pieces he finds, he works more with the shapes that already exist. During the hours he spends gathering scrap metal, his trained eye is searching for shapes that he will be able to use. But the creative inspiration for the design of those materials doesn’t always arrive as planned. “Sometimes I walk around steel and nothing happens and, a few years later, all of a sudden something hits you . . . it’s just there in front of you.”

This was the case when the idea for an Easter sculpture climbed into Engbrecht’s head and announced itself during a midday nap three years ago. He went straight to his workshop and copied down the exact design.

The base of the sculpture embodies the chaos that occurs throughout life—harrow tines represent people caught in the crossfires, rings remind them of their busy lives running in circles, and chains symbolize their vices. But growing out of this are two question marks, representing the questions to which people have answers and those to which they do not, that together form a heart. This is the heart of God, whose love sent Jesus to die and rise again on Easter, visualized in the cross at the top of the sculpture. “That was a real special one for me,” he says.

Engbrecht has enjoyed hearing people’s interpretations of his art and connecting with artists who do similar work. He is looking forward to years of “further inspiration in creating meaningful art sculptures from worthless metal.”

This article appears in the May 10, 2021 print issue, with the headline “‘I’d never thought of myself ever sculpting.’” Do you have a story idea about Mennonites in Manitoba? Send it to Nicolien Klassen-Wiebe at mb@canadianmennonite.org. 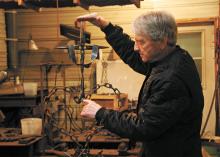 Don Engbrecht has built around 200 works, including this Easter sculpture. (Photo courtesy of Don Engbrecht) 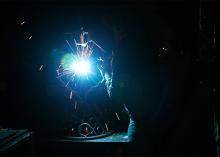 Don Engbrecht has been sculpting and welding scrap metal for 20 years. (Photo courtesy of Don Engbrecht) 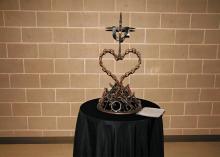 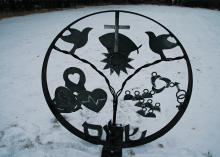 The outer circle of the Shalom sculpture indicates wholeness, while each segment represents an aspect of shalom: physical wellness, right relationships and healthy spirituality. The pattern of threes symbolizes stability and harmony. (Photo courtesy of Don Engbrecht) 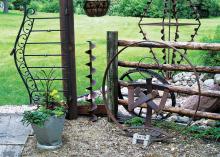 One of the sites in the Engbrechts’ Anchorage Gardens. (Photo courtesy of Don Engbrecht)

We are privileged to own one of Don Engbrecht’s works of art. It is not a surprise that he is able to see beauty in scrap metal. He has always used the talent God gave him to display God’s love to His people, whether through music, the Gardens, the sculptures or through the community which he serves so faithfully. May God continue to bless you, Don, as you serve Him with your art.