‘These records are unique’

Original letter of invitation to Mennonites discovered in conference basement 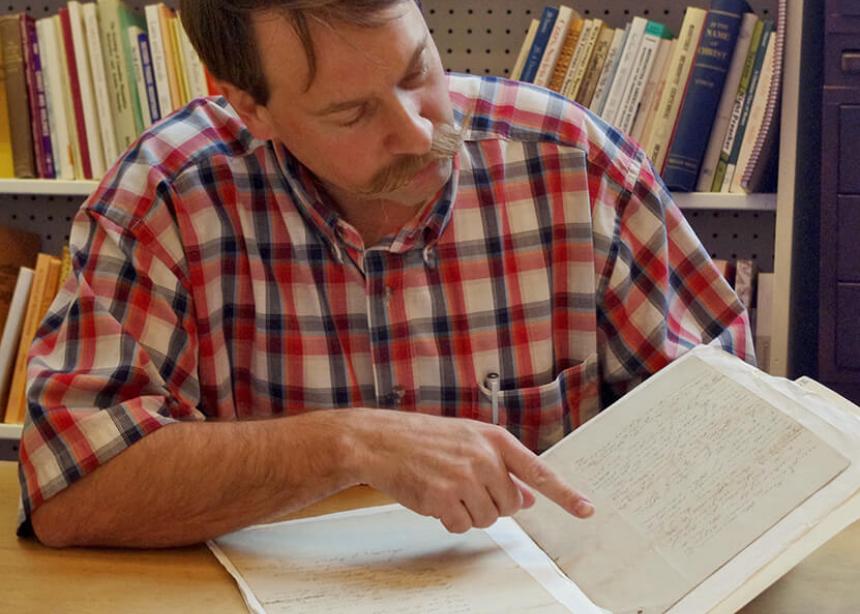 The looping cursive script has turned brown, the yellowing pages are smudged with fingerprints and held together with aged pieces of tape. In the top left corner of the document, the faded blue ink of a rubber stamp reveals the date this document was written and signed: July 24, 1873.

The letter is a significant historical artifact for Mennonites: it is the original invitation from the Dominion of Canada to Mennonites living in Russia (modern day Ukraine) offering them land, freedom of religion and exemption from military service.

The document, known as the Priviligium, was unearthed a couple of months ago when the Christian Mennonite Conference (CMC, formerly the Chortitzer Mennonite Conference) decided to sort through 20 boxes of old papers and financial records in the basement of its offices in Steinbach, Man.

“It was a mess that needed to be cleaned up,” says Dave Reimer, the conference bishop. “I knew there was a lot of historical value in the boxes and I didn’t have time to look at it.”

Reimer contacted a few local Mennonite history buffs who were happy to look through them. One of the first items that emerged was the Priviligium.

“We knew the document was down there,” says Reimer. “What we did not know was that there was an original German copy of it. . . . It’s just neat to have the actual copy in your hand.”

The letter, signed by the secretary of the Department of Agriculture, made 15 provisions for the Mennonites. It reserved eight townships in southern Manitoba for Mennonite settlement and offered each Mennonite adult a free quarter-section of farmland (65 hectares), with the option to purchase the remaining three quarters of the section at a price of $1 per acre ($2.50 per hectare).

A close look at the brittle pages reveals something else. Three of the 15 numbered provisions have been marked with small X’s, as though someone chose to single them out for special attention. Highlighted are exemptions from military service and the swearing of legal oaths. But perhaps the most significant article singled out is the one offering Mennonites “the fullest privilege of exercising their religious principles . . . without any kind of molestation or restriction whatever,” along with the freedom to educate their children in their own schools.

The letter was written at a time when Mennonites in Russia and Ukraine were getting nervous, explains Conrad Stoesz, archivist at the Mennonite Heritage Centre Archives in Winnipeg. Changing legislation meant Mennonites were required to teach Russian in schools and were no longer given complete exemption from the military. So the Mennonites sent delegates to North America to look for a new home. A delegation that included four leaders—David Klassen, Jacob Peters, Heinrich Wiebe and Cornelius Töws—visited Canada in 1873. “They came back to recommend Manitoba because Manitoba offered this kind of document,” says Stoesz. The U.S. didn’t offer Mennonites the same religious and political freedoms.

The Dominion of Canada was looking for hardworking European farmers to settle its newest province, Manitoba, which the government had recently cleared of its indigenous inhabitants. Between 1874 and 1880, 17,000 Mennonites left Russia. Seven thousand of them came to Manitoba. Most made the voyage in small family groupings, but one colony moved in its entirety. The Bergthal Colony, consisting of a few thousand people, made the voyage to Manitoba between 1874 and 1876, and settled east of the Red River on land known as the East Reserve. They carried with them many documents, including copies of sermons and ledgers from the Waisenamt, an organization that functioned like a community bank and held inheritance money in trust for orphans and widows. “The Waisenamt had enough money to fund the entire colony to move, rich and poor, young and old,” says Stoesz.

Stoesz is helping the CMC sort through the documents with the help of volunteers who are skilled in reading German gothic script. The documents will be transferred to the Mennonite Heritage Centre Archives for safekeeping and research purposes. 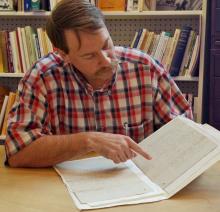 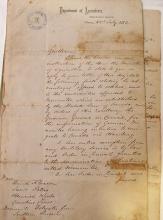 Nice photocopied copies would be appreciated

What a great find! This will be added to the family records all of us are working on. Thank you.

Several readers have inquired about getting copies of the Priviligium documents. As indicated in the story above, the documents were transferred to the Mennonite Heritage Centre Archives, in Winnipeg. See more information about the Archives at http://archives.mennonitechurch.ca.--Web editor