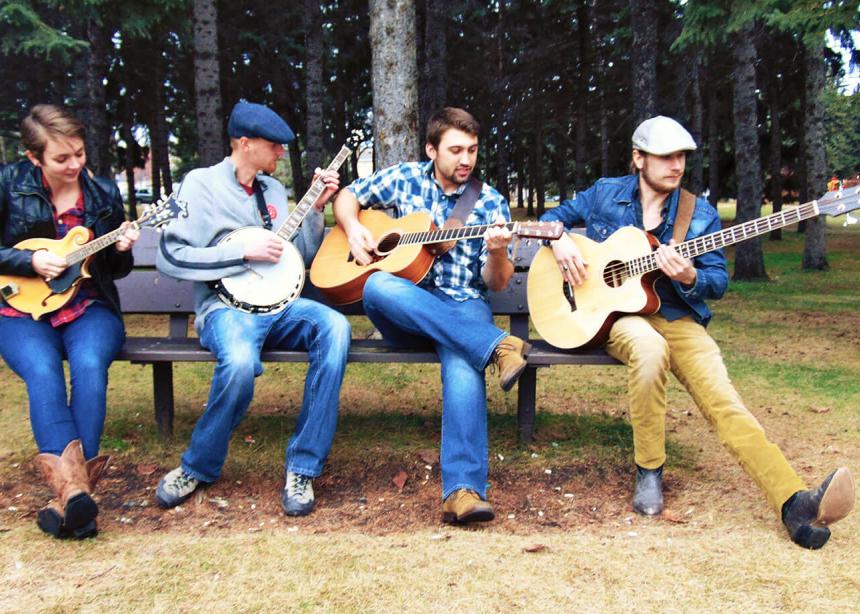 They might perform at cafes, bars and festivals throughout the Saskatoon area these days, but bluegrass quartet Sparky and the Plugs got their start playing music in church.

“That was really important for us,” Schellenberg says. “It’s such a supportive audience. No matter how you did, someone would come up and say thank you. . . . That was a great part of getting into [music] there. You didn’t have to perform, it wasn’t a big to-do, but you’re gaining some of those skills.”

Soon after the four began participating in worship at Mount Royal, Sparky and the Plugs—which includes Clay Buhler on bass, Curtis Wiens on banjo, and Jill Wiens on mandolin—were being asked to perform at a variety of functions in the wider Mennonite community, including at Mennonite Central Committee and Saskatchewan Mennonite Youth Organization events.

The band broke into the wider music scene in 2015, when they were invited to perform at the Northern Lights Bluegrass and Old Tyme Music Festival near Big River, Sask., located two-and-a-half hours north of Saskatoon.

“That ‘sparked’ something in us,” Schellenberg says, adding that he and his band mates were blown away by the other musicians at the festival. “You go and see some world-class acts playing the same style of music and you realize there’s some work to be done. There’s a different level you can reach. [It was] a little shocking, but overall, a really cool experience.”

They returned to perform at the Big River festival this past August. That same month, they recorded their self-titled debut album at Saskatoon’s Seashell Sound Productions with recording engineer Darrell Bueckert. They recorded the bulk of the material live off the floor in two days. The goal of recording the album live, as opposed to tracking each instrument and vocal part separately, was to capture the feel the four members have when they perform as a single unit.

“Darrell thought, you know, part of the whole rootsy bluegrassy sound is that everyone has sort of an energy together, so that’s something he wanted to bring out of us,” Schellenberg says. “I really enjoyed that.”

The album comprises 10 original songs. Schellenberg says that, while none of the lyrics are explicitly faith-based, their music is influenced by the fact that they belong to the Mennonite church.

“A lot of bluegrass is about whisky and wild women, [but] that’s something we feel we don’t need in our music,” Schellenberg says. “We write about things that have affected our lives.”

For Schellenberg, part of the appeal of playing in the group is that its members are, first and foremost, friends. That makes it easier to present new material to the group. “You just kind of have this sense of freedom to share what you want to share, because sometimes our songs mean quite a bit to us and sometimes there’s a lot of emotion behind it,” he says. “Being with a group of friends who you know are going to accept you [makes it] pretty healthy to be able to share in that way.”

Sparky and the Plugs released their album at the end of November with a show at Saskatoon’s Underground Café, and are looking forward to more opportunities to share their music.

“I think as new songs come up, we’ll try them out together and see what happens,” Schellenberg says. “We’re not quite sure [what’s next], but we do want to keep making music.”

For more information about the band and its music, visit reverbnation.com/sparkyandtheplugs. 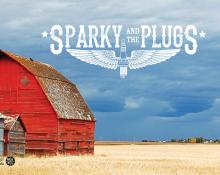 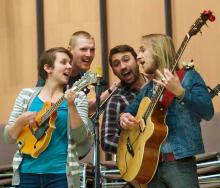