‘Social media: The good, the bad and the beautiful’ 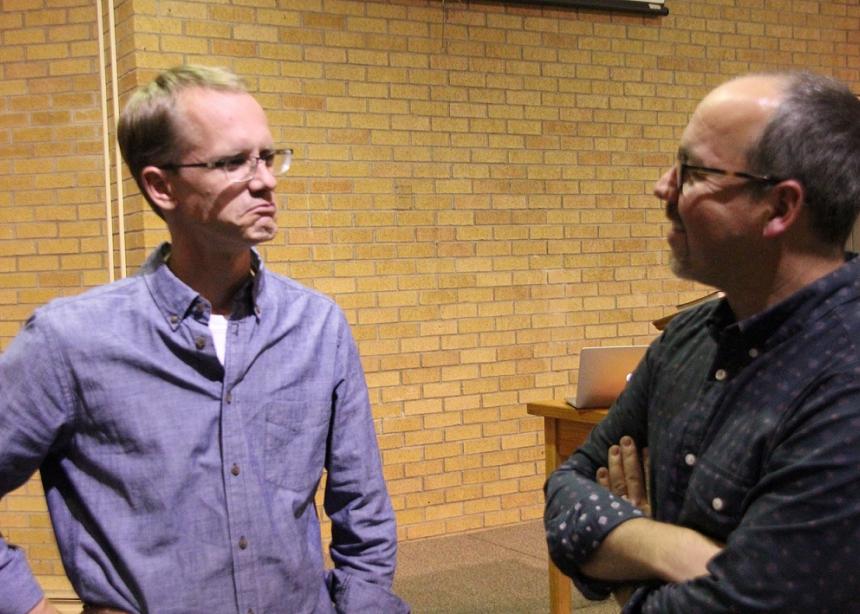 Selfies just might be God’s idea. Remember, you are smarter than your smartphone. What if virtue went viral?

With these three ideas front and centre, David Balzer, assistant professor of communications and media at Canadian Mennonite University in Winnipeg, spoke to multiple audiences of students, faculty, staff and parents on the topic of “Social media: The good, the bad and the beautiful” during Spiritual Emphasis Week earlier this fall at Rockway Mennonite Collegiate in Kitchener.

In classes and other venues students immediately began to think about how they take selfies. “What would it feel like to always be asked before you were included in a selfie?” was one question to which students connected. The objectification of people into images, instead of being with the people one was with in person, was another discussion, as was the challenge to not only be consumers of media, but creators as well. As faithful people, Balzer said there is a lifelong calling to bring the biblical story into media use and production.

During a parents, students and pastors session on Sept. 28, 2016, he delved into two texts from Genesis that contrasted human co-creation with God. In Chapter 2, where humans are invited to name the animals, God is still the creator, and the naming brings honour to God. But in Chapter 11, the builders of the Tower of Babel do so to “make a name for ourselves,” trying to reach the heavens on their own without God.

Those present entered into a lively discussion about the place of smartphones in the lives of students and their parents. Many students named parental overuse of smartphones as their example. “I’ll put my phone down as soon as my parent does,” was one sentiment. Balzer and parents gave each other permission for phone or screen fasts, for an hour or a weekend, to make room for real conversation and interaction with their children.

Fascinating in Balzer’s presentation was the comparison taken from Harold Innes, who looked at the effect of technology on society, economics and politics. Innes, who died in 1952, looked at how writing enabled the Roman Empire to exist and flourish for centuries with information being able to be passed over large distances. Then the invention of the printing press in the 1400s made wide dissemination of ideas possible.

Both of these were pivotal moments of change in western civilization, much like the present, when change is happening faster than most people can absorb. To illustrate this, Balzer showed a humorous video of someone making the change from scrolls to books and needing an “information technology” helper to do so. (To view the video, visit bit.ly/medieval-helpdesk.)