‘Serving the Lord with gladness’

William Thomas Snyder, MCC’s longest-serving executive, remembered on the centenary of his birth 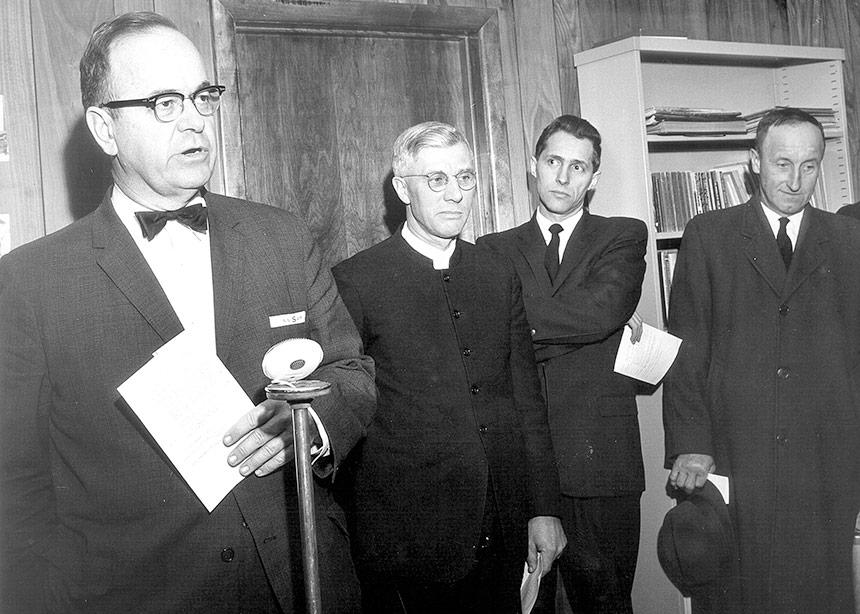 When the indomitable Orie O. Miller retired from Mennonite Central Committee (MCC) in 1958, there was a lot of speculation about who would fill his big shoes. In Miller’s mind, though, that question had been settled years earlier, when he chose, out of the rich Civilian Public Service (CPS) talent pool, the unpresumptuous William Thomas Snyder to be his associate. Few observers could have imagined that Snyder would exceed Miller’s 23-year tenure as the head of MCC.

The MCC inherited by the 41-year-old Snyder was in the final stage of a post-Second World War recovery program that was out of proportion to its size. It had become a household name for Mennonites in Canada, the United States, parts of Europe and beyond. Its future role was unclear. Some even suggested that it be terminated lest, as an ongoing inter-Mennonite organization, it would distract from conference-sponsored programs.

Snyder had already worked closely with Miller for 15 years. He had a major though largely behind-the-scenes role in the relocation of 5,400 refugees to Paraguay and Uruguay. The Snyder family, which included three children, made Akron, Pa., their home. Snyder and his wife were charter members of the former General Conference Mennonite Church in neighbouring Lancaster City.

The MCC of the late 1950s was, to say it kindly, provisional. It did not even own the remodelled buildings that constituted its shabby headquarters. Many asked why such a ministry should be housed in Akron, a small borough surrounded by Amish tobacco fields in Pennsylvania Dutch country.

The MCC of this period was staffed mostly by young short-term volunteers under the direction of a few veterans. Its primary focus was aiding Mennonites in Europe and Paraguay.

Snyder was not driven by ego or personal ambition. Under the direction of an active executive committee, he professionalized the workings of the MCC headquarters. He introduced policies and procedures that attracted a new generation of workers. A modern office building was constructed in 1961, followed by a dining facility to better serve the volunteers passing through Akron en route to their assignments.

The seamless transition from Miller to Snyder was a double surprise to many. Miller let go, and the youthful Snyder assumed the reins in a surprisingly sure-footed way, continuing the programs underway while introducing a string of innovations. Snyder was action-minded, his vision global. His North Star was always what the Mennonite church would support. His fingerprints in the tumultuous 1960s and ’70s were as pronounced as those of his predecessor in his era.

Supported by a service-minded constituency, Snyder built a global ministry that reached into more than 50 countries. With a multimillion-dollar budget, it was staffed by an ever-growing stream of young people. Prominent in the expansion were programs in Africa, then in the throes of various national independence movements. Many were in partnership with the decades-old Mennonite missions. The primary emphasis shifted from relief to development and peacebuilding.

Bridging the Miller and Snyder transition was a Voluntary Service program, patterned after CPS to address needs in the United States and Canada, and the virile PAX program, which focussed initially on postwar reconstruction. Later, in the Teachers Abroad Program, more than a thousand years of service were collectively rendered by MCC teachers, educating a new generation in the newly independent African countries.

Snyder had a major role in nurturing to maturity a raft of new ministries, many of which are still functioning two decades after his death. These include Mennonite Disaster Service, numerous mental health programs, Self-Help Crafts (now Ten Thousand Villages), Mennonite Indemnity, and Mennonite Economic Development Associates. It was also in this era that the now-ubiquitous More-with-Less Cookbook was published by MCC.

To finance the growing number of programs, new forms of fundraising were introduced. These included relief sales and thrift stores, which became major MCC income streams.

Like his predecessor, Snyder was not a dynamic public speaker. He did not author any books. His gift was the creation of a stage for a generation of action-minded youth to render Christian service to a needy world. Snyder is deservedly remembered as a servant leader willing to share the limelight. This no doubt contributed to his being forgotten too soon.

Equally unheralded were his wife Lucille and their children. They lived modestly in an MCC apartment across the street from the historic MCC Main House on Akron’s Main Street.

Although MCC was the primary channel through which he chose to invest himself, Snyder was known and respected well beyond it. He was a longtime influential member of the board of Bluffton (Ohio) College, his alma mater. Bluffton conferred on him an honorary doctorate in 1982. The following year it recognized him with the Outstanding Alumni Award.

Snyder served on numerous committees of the then General Conference Mennonite Church. He had a warm collegial relationship with leaders in the National Council of Churches, although MCC was never a member. He was much appreciated in the International Voluntary Service organization based in Washington, D.C., on whose board he served for some years with persons of national prominence.

When he retired in 1985, at the age of 65, MCC conferred on him the title of executive secretary emeritus. He continued to read widely. His knowledge of the world was encyclopedic; his commitment to MCC and the wider Mennonite church was infinite.

While his poor health precluded travel in retirement, his interest in world affairs, and the Mennonite role within it, never waned. He died at the age of 75 in 1993. He lies buried in the Akron Mennonite Church cemetery under a marker with the apt inscription: “Serving the Lord with gladness.”

Edgar Stoesz served with William Snyder during Snyder’s entire 24-year term as executive secretary, and for some years as his associate.

“[I]mportant for the MCC-MCC Canada relationship . . . was the friendship and trust between J. M. Klassen and William Snyder, MCC executive secretary. Klassen’s work with MCC in Korea and his short stint at the MCC office in Akron had given him a good understanding for and sympathy with MCC and its ministry, and respect for Snyder.

A trip which the two men made to Paraguay in 1964 seems to have cemented their relationship. At the end of a hot, dry day of travel, Snyder was discovered polishing Klassen’s dusty shoes. Klassen interpreted this simple deed of service as comparable to Jesus’ act of foot washing. Loyalty to, and continuing cooperation with, Akron would remain a very high priority for Klassen.

Snyder had harboured doubts about the formation of MCC Canada and how it might de-rail the U.S.-Canada relationship in MCC. But as the money arrived steadily from Winnipeg, he became a believer.

In mid-1965 he wrote a letter of appreciation to Klassen for the prompt remittances, indicating the MCC Canada structure would be a much improved channel for getting funds and personnel to places most needed. He wrote, “I believe history will give all of you who had a hand in bringing MCC Canada into being as a broadly based organization, a few kudos.”

Snyder was thrilled when, in 1965, MCC Canada sent $190,654 to Akron, not including the value of material aid, and in 1966, almost double that amount, $363,446. At points he noted MCC Canada was increasing its giving to MCC in greater proportion than other groups. In many ways Snyder’s worries about the Canadians were mitigated, at least for a time.

Klassen and Snyder frequently assessed the Canadian response to MCC by measuring Canadian statistics against those of the entire North American constituency. According to the membership in Mennonite and Brethren in Christ churches across Canada, compared to that in the U.S., Canadians should be contributing roughly 30 percent of the total revenue and material aid to the combined effort.

It became clear in the 1960s that Canadians did comparatively well in terms of money and material resources. They even increased the MCC workers serving worldwide, 137, or 22 percent, were Canadians. Notably, 80 percent of MCC’s “country reps” (the administrative heads in the respective country programs) were Canadian.

The preponderance of Canadians service workers in this leadership role was because they tended to be somewhat older and more experienced than U.S. workers, many of whom were young men fulfilling alternative service obligations through MCC (a draft continued until the end of the Vietnam War). The percentage of Canadian service workers would rise and fall through the decade before climbing to 32 percent in 1973.”

Excerpted from Mennonite Central Committee in Canada: A History by Esther Epp-Tiessen, pages 90-91.

1. How have you, your family or your congregation been involved with Mennonite Central Committee (MCC)? How is MCC perceived by Mennonites in Canada? Why might Mennonites support MCC rather than other aid or development agencies? How well are MCC fundraisers supported in your community?

2. Have you, or people you have known, volunteered with MCC, either locally or overseas? What kind of impact did these experiences have? How has voluntary service changed over the years? Do you think volunteerism is dwindling?

3. Edgar Stoesz writes that, under the leadership of William T. Snyder, MCC began many new ministries, including Mennonite Disaster Service, Ten Thousand Villages, and other mental health and economic development programs. Why were most of these programs developed to become independent of MCC? Which initiatives should remain under the MCC umbrella?

4. What challenges do you think MCC faces in the future? Is there still a strong connection between MCC and Mennonite congregations? How important are material aid projects (relief kits, blankets, etc.) in maintaining this connection? Where should MCC concentrate its efforts for the next decade? 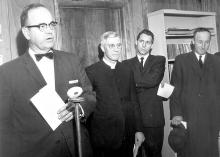 When Kathy Hildebrand attended the 1969 annual MCC meeting, she commented to executive secretary William Snyder, ‘I didn’t come to shop at Marshall Field! I came to hear what MCC is doing.’ (Burton Buller photo / Mennonite Archives of Ontario) 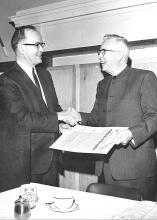