‘Our need for weed’ 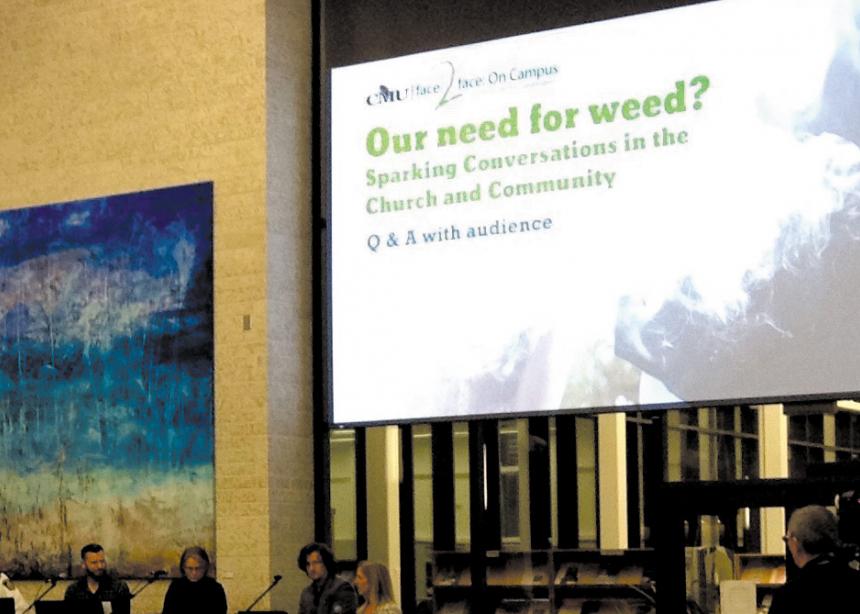 It’s not often that you see the words Mennonite, church and university in the same sentence as marijuana. Yet, “Our need for weed? Sparking conversations in the church and community” was the title of the Nov. 15 Face2Face event at Canadian Mennonite University (CMU). A panel, which included a police officer, a rehabilitation counsellor, a medical cannabis producer and a Mennonite pastor, gathered with more than 100 audience members to discuss the implications of the Canadian government’s plan to legalize marijuana.

Right now, selling and owning cannabis for non-medical reasons is still illegal in Canada. But the federal government’s current plan is to legalize the production, sale and recreational consumption of marijuana as of July 1, 2018. The government also plans to implement strict regulations on marijuana, especially involving youth. It is putting $36.4 million towards educating the public about cannabis over the next five years, according to Health Canada.

But regardless of how the government prepares for it, the legalization of marijuana will bring big changes to Canadian society. CMU wanted to host a discussion about weed, not to position itself, but to open up conversation with its community on how to deal with this potential new reality, said Terry Schellenberg, a CMU vice-president.

It was clear from the panel discussion that people have different opinions about such changes. Some believe these changes will be for the better, while others think quite the opposite.

Max Waddell, commander with the Or­ganized Crime Division of the Winnipeg Police Service, warned those gathered that the legalization of cannabis probably would not change criminal involvement with the drug. Criminals could still capitalize on being able to work outside regular business hours and likely sell the drug for less. He also spoke of the danger of driving under the influence of drugs and the effects the smoke can have on those exposed to it in public spaces, especially young people.

As a rehabilitation counsellor with the Addictions Foundation of Manitoba, Daniel Dacombe works closely with young people. He said many young people in Canada believe that weed is safe, and everybody does it, although marijuana actually often creates long-term negative biological and psychological changes in young people’s brains. Legalization of weed could put more young people at risk, he said. However, he also said that legalization would allow for more open conversations in schools and research about cannabis.

Bonify is a medical cannabis producer in Winnipeg that works with experts in the cannabis field and its customers to provide the best services for their individual needs. Nelson Martens, a Bonify representative, pointed out how life-changing medical cannabis can be for those suffering from serious illnesses. He also emphasized the importance of safe, high quality cannabis, as use of the drug increases.

Erin Morash, the pastor of Crystal City Mennonite Church and Trinity Mennonite Church in Mather, said she is neither against nor for the legalization of marijuana. Instead, she said the drug is a reality that already exists in Canadian communities, a reality people need to face. Legalization would merely make it official and likely increase the number of people who try weed.

She hopes legalization will open up conversations in the church, not only about marijuana but about larger topics like addiction and dependency on substances, whether legal or not. Many people would like the church to stay silent about marijuana so they can pretend the issue doesn’t exist, she said, but the church must face those realities. Why? “Because people that are using are in my foyer!” she said. “If I pretend they’re not . . . I’m not doing my job.”

People are often afraid to share in the church because they’re afraid of being judged. Schellenberg said there were fewer people at CMU’s Face2Face event than he had hoped. He heard several people say they didn’t come because they didn’t want to appear being in favour of drugs, or make people think they had personal or family issues involving drugs.

“We don’t have very good systems for confession and healing. We have great systems for condemnation,” said Morash. But she is hopeful that legalization may push the church to open up the conversation and change these systems. “The church actually has a role in talking about what it means when people get broken,” she said. “Then we have to help them deal with the results of that.”

Thanks to CMU for hosting an important conversation. Among Greeks who favored Plato's thought in Paul's time, the use of ecstatic experience was seen as a path to 'fellowship with God.' 'We know the gods through the passions' is attributed to Plato. What we have in these post-modern times is a portion of our population reverting to pagan attempts to commune with God. Watch for syncretism in the future where cannabis and Christianity are fused into an enlightening and Gnostic expression of faith.

I believe there is both a want and need for marijuana. It can be used for both recreational and medical purposes. Some medical users also indulge in it recreationally and some recreational users indulge in it medically. Marijuana has a multi purpose. Can marijuana be abused? Yes. However the argument there is: anything can be abused. Sugar can be abused. It is the reason why diabetes is at the top of the list as one of the most deadliest diseases? Then there is alcohol. Do we need to discuss the problems it causes? No. The question is which causes the most problems? Alcohol causes all kinds of health problem and contributes to violence. Marijuana has health benefits and no violence has ever been linked to marijuana. Then why has marijuana been illegal? Political and racism.