‘Love for all, hatred for none’ 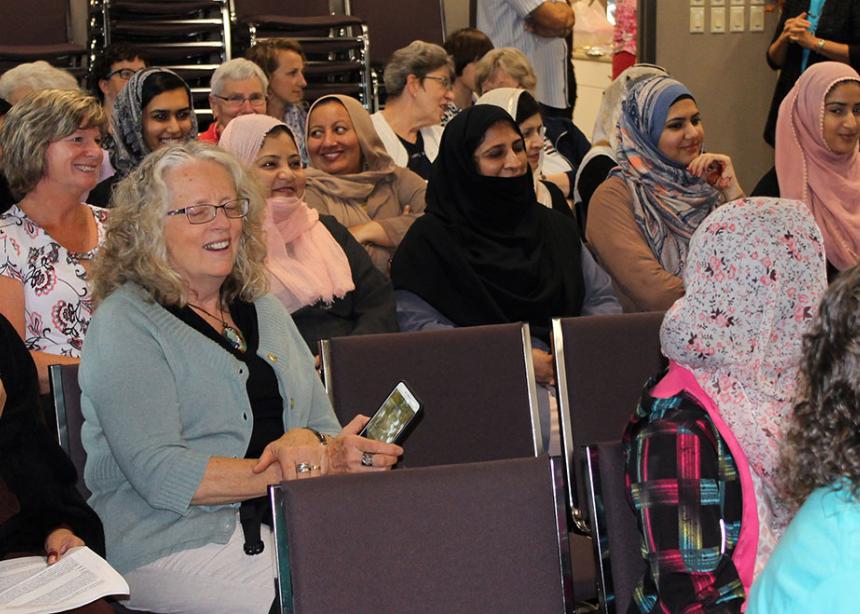 It isn’t every day that Mennonites share a potluck meal with Muslims. Yet this is what happened when Wildwood Mennonite Church in Saskatoon invited members of the Ahmadiyya Muslim Jama’at to join them for a fellowship lunch.

Following the morning worship service on Sept. 18, 2016, about 30 Muslims arrived at the church bearing food and good will. Joe Heikman, the congregation’s pastor, welcomed the guests, inviting men and boys to find places on one side of the sanctuary while women and girls were seated on the other. Heikman reminded his audience that at one time such seating arrangements were the norm in Mennonite congregations as well.

Imam Khalid Minhas described his branch of Islam as peaceable, its motto being “Love for all, hatred for none.” They call themselves Messianic Muslims, believing that Mirza Ghulam Ahmad (1835-1908) was a divinely appointed messiah in the likeness of Jesus. Minhas explained that the Ahmadiyya Muslim Jama’at supports the humanitarian work of its independent charity organization, Humanity First.

“A lot of what you’re sharing resonates with us,” Heikman told his guests. He then offered a brief history of the Mennonite faith. Citing Palmer Becker, Heikman said, “We are first and foremost followers of Jesus. Community is the centre of our lives and reconciliation is the centre of our work.”

Both Mennonites and their Muslim guests worked quickly to set up tables for the meal. Women and girls ate together in the church foyer, while men and boys sat at tables in the sanctuary. Lentil curries and savoury rice dishes graced the buffet alongside more familiar fare. Lively conversation followed as these neighbours ate together.

The meal was not the first opportunity these communities had to get to know one another. In the fall of 2015, some women from the congregation attended an event at the University of Saskatchewan on the topic of misconceptions surrounding Islam. There, they met several women from the Ahmadiyya community.

“Conversation turned into friendship and expanded into organized events with [the Ahmadiyya] women’s group: a board game event, a tour of the Mennonite Central Committee Saskatchewan building, shared meals,” said Heikman. Some members also attended a public open house at the mosque last winter, he added, and several “attended a public Ramadan event this summer, where we were invited to observe their prayers, discuss what fasting means to them, and break the fast at sundown with a fantastic meal.”

Heikman sees these endeavours as part of his congregation’s witness to its surrounding community. In his Sept. 13 blog post, he wrote, “If we are to love our neighbours and our world as Jesus calls us to do, we need to know and understand people who are different from us. . . . It is good for us to include in our circles and, yes, our church experiences, people who have lived in other countries, who have distinctive cultural practices, who understand God and the world very differently than we do.”

Ahmadiyya Muslims are a small minority within the larger Islamic faith, and have suffered discrimination and persecution at the hand of other Muslims, who consider them heretics. They are also a distinct minority in Canadian society, and value the good will of their Mennonite neighbours.

“The opinions of white Christians matter a great deal in our region. And much of the general public’s understanding of Islam is warped by fear and misunderstanding,” said Heikman. “These misconceptions and stereotypes are intimidating and at times truly dangerous for our Muslim neighbours. We can show our respect by listening and learning.”

What does the future hold for this friendship?

“We’ve talked about the possibility of sharing in some local service projects together, so that may be a next step,” said Heikman. “And there are natural connections through work and school and living in a small city. These truly are our neighbours, so friendships are there if we’re open to them.”

For more about Muslim-Christian dialogue, see:
‘Love for all, hatred for none’
Walking together . . . rather than around each other
Counting conversations, not conversions
Deconstructing Muslim myths 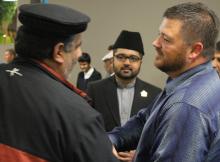 How wonderful to read of efforts to break down walls between religions.