‘Leaving behind what wasn’t healthy’ 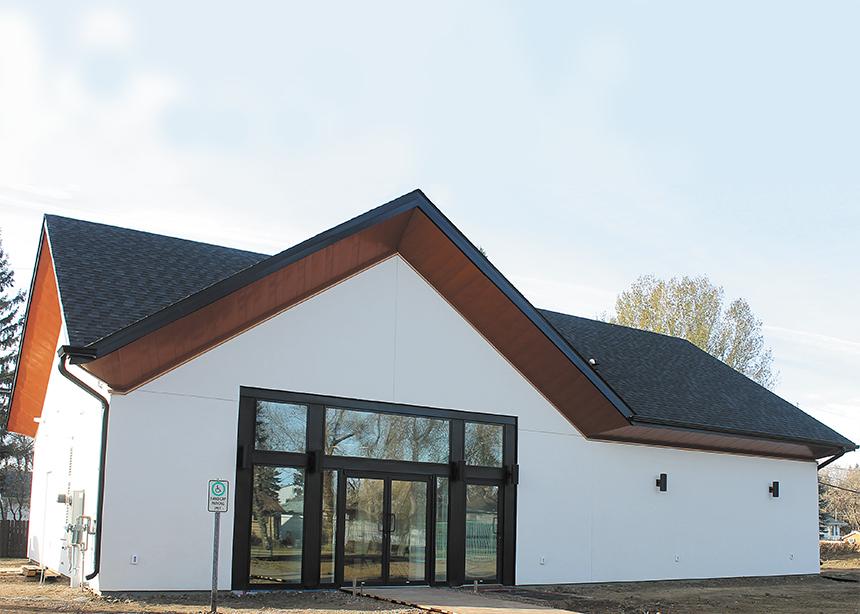 The new home of Langham Mennonite Fellowship stands on the same site as the old Zoar Mennonite Church. (Photo by Donna Schulz)

Zoar Mennonite Church in Langham has a new home—and a new name.

When the congregation discovered black mould growing in the basement of its old church building some years ago, it didn’t immediately decide to build a new church building. Instead, it gutted the basement and had it cleaned and disinfected. But the problem persisted, making some congregants unwell.

Ed Bueckert, the congregation’s chair, says the decision to build a new building was not an easy one. “We drew up plans based on our dreams, but we couldn’t afford that,” he says. “We also looked at leasing space somewhere in town.” That option didn’t seem feasible either. In the end, the congregation decided to build what it could afford.

According to the Global Anabaptist Mennonite Encyclopedia Online, the congregation averaged 175 members between 1950 and 1990. Today, about 40 congregants meet each Sunday for worship.

“For a while, we beat ourselves up because we could see the community growing, but the church wasn’t growing,” says Bueckert. “We even did a blitz of the town and were received well, but it didn’t result in people coming through the doors.”

He says this forced members to ask themselves, “If people aren’t coming through the church door, how can we be a light to the community?” The answer was simple: “We need to be out there.”

And congregants are “out there,” he adds. With involvement in everything from ecumenical activities to recreation boards and seniors groups, the church’s members are actively involved in the Langham community.

With that in mind, congregants voted to change their church name from Zoar Mennonite to Langham Mennonite Fellowship. The name Zoar means “place of refuge,” and, for early settlers, the church was a place of refuge. “But,” says Bueckert, “we felt the name didn’t suit us anymore [because it isn’t] as important for the community to come to our church [as it is] for us to be out in the community.”

Keeping “Mennonite” in the name was important to congregants, and they chose to call themselves a “Fellowship” because “‘fellowship’ is important to us, and we include our whole community in that,” says Bueckert.

The new church building is a reflection of that intention. The small sanctuary accommodates up to 80 worshippers on movable chairs rather than pews. Tables, stored in a closet off the foyer, are brought out for fellowship meals served from the adjacent kitchen and eaten in the same multi-purpose space. A balcony houses the sound system and a small office. The basement, as yet unfinished, will house Sunday school rooms and another multi-purpose space, which will be available for rent. “We want this building to be a service to our community,” says Bueckert.

The estimated cost of the new building was $450,000, and Bueckert expects the project will come in under budget. The congregation does not have a mortgage. While the cost to build did not cover demolishing the old building, a quirk of nature helped the church out. A severe summer hailstorm damaged both buildings and, even though the old church was slated to be torn down, the church’s insurance company paid out the claim and the payment helped to cover the cost of demolition.

The congregation moved into its new facility on Sept. 9, 2018. The day began with a final service in the old building. Bueckert says. “We talked about leaving behind what wasn’t healthy and taking along what was useful and helpful, both physically and spiritually.”

Every physical item that members wished to keep and use in the new church building had been cleaned and disinfected prior to the move. Even hymnals had been laid out in the sun to remove every trace of mould spores. Then, he says, “every person carried an item over to the new building [and we] had a second service.”

Bueckert says the congregation doesn’t know where God will lead it next, and he speaks of the church as “a work in progress.” He adds, “We’re feeling our way. Everything is up for grabs.” 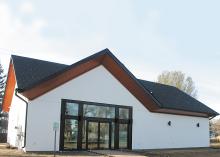 The new home of Langham Mennonite Fellowship stands on the same site as the old Zoar Mennonite Church. (Photo by Donna Schulz) 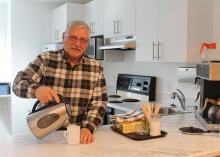 Ed Bueckert, Langham Mennonite Fellowship’s congregational chair, says the church wants its new building to be of service to the community. (Photo by Donna Schulz) 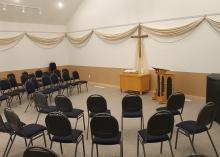 The church’s sanctuary is a multi-purpose room with space for about 80 worshippers. (Photo by Donna Schulz) 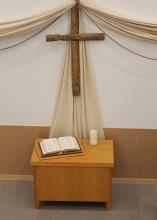 Among items carried over from the old church to the new are this cross and the church’s communion table. (Photo by Donna Schulz) 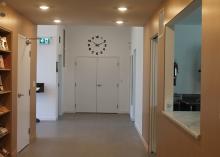 The church’s foyer has doors leading to the pastor’s office, the church kitchen, the basement stairwell, washrooms and several storage spaces. (Photo by Donna Schulz) 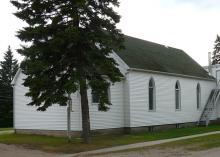 The former Zoar Mennonite Church building has been demolished. (Photo by Donna Schulz)

Wonderful article! I love what this church has done. Kept the good of the old and trying to become a more wider community-minded area that can by loved and utilized by many. Keep up the good work! This is the work of the Kingdom of God. Truly it is!

It’s an interesting discussion when a church begins to lose members. What is the reasoning? I can tell you this much: that the last thing members want to see is the church becoming more like the new beliefs of those outside. Those coming for refuge regret walking through the door to find little difference from what they left outside. I returned to the Seventh-day Adventist church in hopes to find what comfort I had left behind only to find that the refuge was no longer there. My friends, fellowship is indeed the most important thing. This includes fellowship with our Savior. Helping our community is important and providing for them a firm foundation on which to stand. Watching a fellowship sending many funds outside our communities as our brothers and sisters suffer from unfortunate situations within can be very disheartening. Stay firm with the only doctrine being the Bible. Hours spent trying to find scriptures to prove man’s own doctrine is the work of those who want to break up our fellowships. Build your house upon the rock of the gospel of Christ. Best regards.