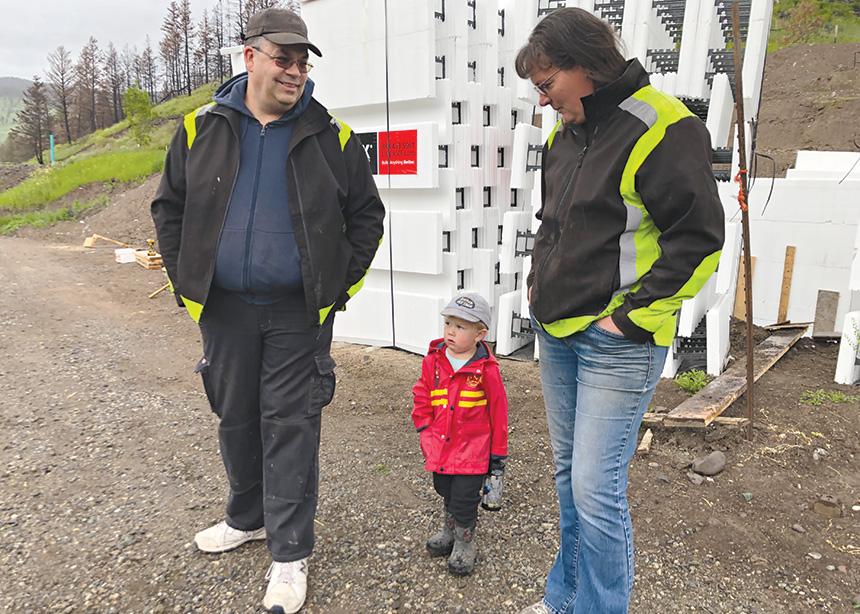 Dustan and Tammy Eager with their son Thomas at the site of their new home in Monte Lake, B.C. (Photo by John Longhurst)

Dustan Eager was home alone when the knock on the door came at 2 a.m. It was Aug. 4, 2021, and someone from emergency services was there, telling him to get ready to leave his home in Monte Lake, B.C. because of the encroaching fire.

His wife Tammy, and their three children—Tristan 10, Sarah 5 and Thomas 2—were in Alberta visiting relatives.

Dustan, 51, didn’t think the fire would make it to Monte Lake, especially since there was a lake between it and the community. “I left the next day,” he said, not thinking anything bad would happen

But then the fire jumped the highway. Once it came, “it came fast,” he said.

The fire destroyed a number of houses in the unincorporated community, located about a half-hour southeast of Kamloops, including the Eagers’ home.

When the family came back home, their house and everything was gone.

“When I first saw the devastation, I was numb, in disbelief,” said Dustan, an inter-city bus driver. “I asked myself, ‘Did this really just happen?’”

“We were numb and then cried,” added Tammy.

Then they kicked into survival mode: Where would they live? How would they make it through the winter? What about the kids?

They also needed to build shelters for their goats and chickens that had been sent away for safety earlier in case of fire.

The couple bought a trailer to live in on their property, hoping to live as normal a life as possible.  “It wasn’t easy,” said Tammy, 44, of the cramped quarters with two adults, three kids, a dog and cat.

Added to the challenge was winter came earlier, and it was a colder winter than normal; the water lines froze, ice formed inside the trailer. It was hard to stay warm.

“There were points I had no mental capacity to deal with it all,” said Tammy.

A daily challenge was making meals for five people with a small stove. “I was used to baking four-dozen muffins at a time in my kitchen, before the fire,” she said, noting the family grew their own food and raised goats and chickens. “The stove in the trailer wasn’t big enough for a roasting pan.”

It was an exhausting time. “There were times I wanted to stop moving, but I couldn’t,” Tammy said. “But my family needed me to keep going. If mom falls apart, the whole family falls apart.”

They were thankful for friends, family and strangers, who were kind and generous. Many offered to donate things to help the family get on with their lives.

“We had to say, ‘No thanks’ to some,” Dustan said. “They were well meaning, but where were we going to put it all? We had no place to store it.”

When they heard Mennonite Disaster Service (MDS) would help them by building a new house, they could hardly believe it. “I can’t put it into words,” said Dustan of what it was like that day they heard the news. “It feels surreal to think it is actually happening. It’s a blessing.”

“I was blown away,” added Tammy.

For the couple, who didn’t have enough insurance to replace their house, it was also an answer to prayer.

During the months leading up to their being connected to MDS, “I felt God telling me to wait, that he had an answer,” Tammy said. “MDS is the answer.”

Along with getting a new house—one of three currently under construction by MDS in the community—they have an increased sense of belonging.

“God is showing us a bigger community through MDS,” Dustan said, adding that the volunteers “show so much compassion, understanding the impact the fire had on us.”

He is also impressed by how hard they work. “They are people who roll up their sleeves and get things done,” he said. “Every volunteer has been awesome.”

For Tammy, the experience has been healing. “God has renewed my faith in humanity through MDS,” she said, adding, “The best thing about getting a new house from MDS is I can be a mom again, be a stable adult for my children. It’s a gift of being able to be myself.” 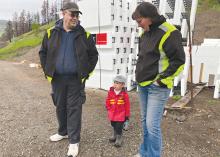 Dustan and Tammy Eager with their son Thomas at the site of their new home in Monte Lake, B.C. (Photo by John Longhurst)

They are still good people's in this world after all.