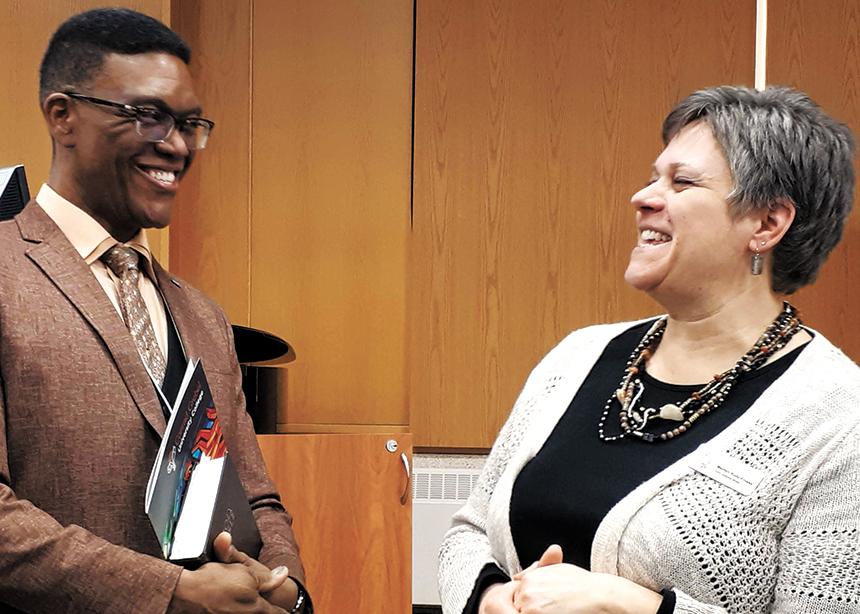 Bailey, lead minister at Parkdale United Church in Ottawa and a community activist for racial justice and reconciliation, explained to the gathering at Conrad Grebel University College last month that his “sacred calling” to engage and dismantle racism comes from a promise he made to his brother who died in his arms of stab wounds from a racist attack.

Pressing home the point that racism is a life-threatening reality, he simply stated, “The colour of my skin caused people to want to kill me.” He emphasized that racism continues to infect Canadian society, with deadly consequences.

In his wide-ranging keynote addresses, he tackled the uncomfortable topics of race and racism. He explained that race as a way of classifying humans is a relatively recent, socially constructed concept, describing how it emerged in European societies in the late 1600s and later served to justify taking advantage of others as European nations began to colonize the world. In the 1800s, philosopher Immanuel Kant used race classifications to create a hierarchy that privileged some and disadvantaged others, he said.

Citing evidence from the Human Genome Project, in which researchers studied 3.3 billion base pairs of DNA over the last decade, he explained how the concept of race has been debunked as bogus, with “no biological basis.” Scientists determined that “race was not a scientifically valid construct.” Unfortunately, Bailey said, racist ideology “has huge repercussions” that people still suffer from today. Several times he emphasized, “Race does not exist. Racism does.”

He outlined how racism found its way into all the major institutions of society, and then explored how this systemic racism plays itself out in daily life. He cited examples from the justice, education and social service systems in which white people experience unearned privilege, power and rights, and black and Indigenous people experience disadvantages. He also reviewed some black history, noting how these contributions have been largely ignored.

He then challenged MC Eastern Canada pastors to re-examine their theological and biblical heritage, to see where it has been infected by racism. He called for a “radical reorientation about how we understand the Bible.” Instead of reading with the lens of the privileged, chosen ones, he called pastors to see and preach from a different plotline. He said that the story of God can only be told by testimonies of people from all nations, even people considered outsiders, outcasts and inferior.

He said that “God’s enduring commitment to all nations” is not an extra appendage, but is “seminal to God’s salvation history,” and “interwoven into the very incarnational story of Jesus.”

Bailey cited numerous examples of outcasts and people from other nations who were integral participants in God’s salvation story. He noted that Hagar, an Egyptian woman, was protected and blessed by God even though she was an outsider in Abraham and Sarah’s family. He brought attention to texts in Exodus and the prophets that describe God saving other nations besides the Israelites (Exodus 12:38, Amos 9:7). He identified the inclusion of gentile women in the lineage of Jesus and gentile Magi in the nativity story. He also noted the diverse leadership in the church at Antioch, described in Acts 13, including people from sub-Saharan and North Africa.

He also showed how Jesus used the encounter with a Canaanite woman (Matthew 15:21-28) to test his disciples. When they failed to move beyond an exclusive, Israel-only view, the Canaanite woman ended up schooling them on the generous nature of God’s grace for everyone.

He noted that there is resistance to this plotline within the Bible. For example, Jonah pouted when God’s mercy was extended to the hated Assyrians. In a different incident, people listening to Jesus in the synagogue at Nazareth turned on him when he highlighted stories of grace extended to gentiles. In the early church, Peter, after baptizing and eating with gentiles, later backed away from such inclusion, demonstrating how hard it is to make such changes.

Despite resistance, Bailey insisted that the “story of God’s incarnate Christ and the mission of God to and in the world can only be comprehensively told and experienced by the full-throated, embodied testimony of people from all nations.” Otherwise, he said, the telling of God’s story will be incomplete. “The grace of God . . . can only be true if it is for everyone.”

Further reading:
The racism around us
Anti-racism is a 'lifelong pursuit'
Ministry on a human scale
Worship warms the human soul
'Evangelism is dangerous' 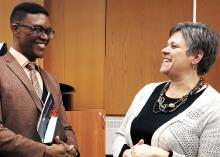