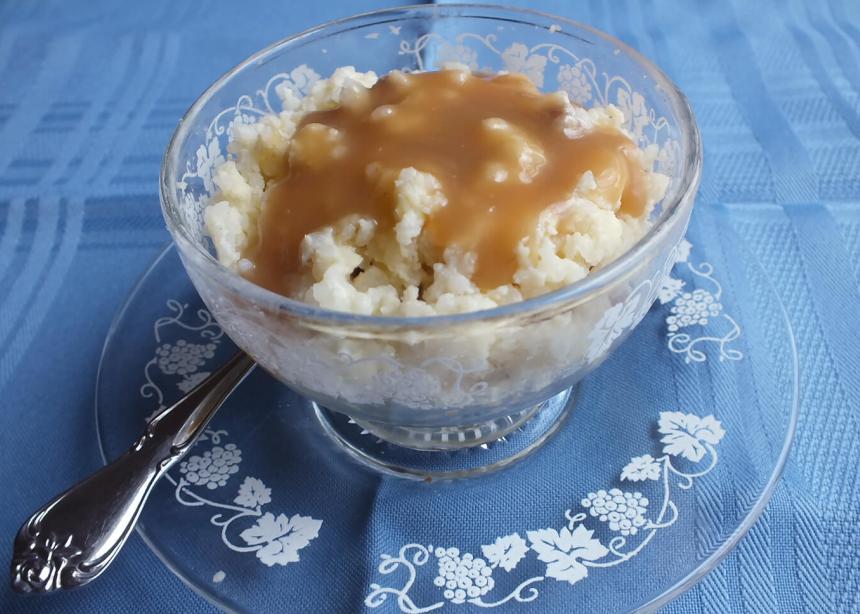 Terry Martens of Hoffnungsfelder Mennonite Church, Sask., volunteers with Mennonite Disaster Service (MDS) as a cook. She often uses this recipe when cooking for MDS volunteers. She supplied the recipe for the column, Gathering Around the Table. The story that goes with it can found here.

Stir together the first four ingredients in a large casserole dish. Bake in 350o F oven for two hours, stirring after one hour. Leave cover on casserole dish for this cooking time.

Beat two eggs, add some hot pudding to temper the eggs, then stir the eggs into the pudding. Add raisins and vanilla. Return to oven (uncovered) and cook for ½ hour. Serve warm.

Heat in saucepan until sugar is dissolved and mixture bubbles.

Reviewed by a specialist
Terry used this recipe for the first supper at an MDS assignment in California in January 2017. Not only was it a difficult day, she was feeling a bit anxious because one of the men had enthusiastically declared himself a rice pudding specialist.

“I was terrified to cook for him because I thought he was a chef,” she said. “Could I trust my Old Fashioned Rice Pudding recipe, which was passed down through the family via my paternal grandmother and mother? Would they realize this was no instant pudding—that it must be oven-tended for two-and-a-half hours? Then comes that creamy, rich caramel topping with a sprinkle of cinnamon sugar!

“After supper that first night at Lodestar Camp in California, the rice pudding specialist asked to see the recipe, which immediately allowed me to regain total confidence in my mom’s one-and-only rice pudding recipe.”

Rice pudding and family connections
Recipes or certain foods are often associated in our minds with circumstances or special people from the past. For me, this rice pudding recipe will always bring with it the memory of playing the “Mennonite game” through non-Mennonite families. When Terry sent me her recipe, she took a snapshot of her recipe card that included the words, “Mum Innis.” She had also indicated in an email that she was planning to travel to Nova Scotia to visit her mother, who was not in good health.

When I phoned her, I commented on the source of her recipe, saying, “My husband’s grandmother grew up in Nova Scotia and had cousins named Innis.”

“Where in Nova Scotia did she live?” asked Terry, and I replied, “In Elderbank—it’s a little town just down the road from the Halifax airport.” Imagine my astonishment when her response was, “I was born there!”

Lo and behold, we discovered that she is a fourth cousin to my husband, through the Ogilvie family. What fun to discover distant relatives, both having married into the Mennonite church, connected through a small town in faraway Nova Scotia!

Of course, it takes a genealogy junkie to make this kind of discovery!