Historian looks at conflicted relationship of ‘Mennonite’ and ‘German’

When Ben Goossen began researching his book on Mennonites and German nationalism in the 19th and 20th centuries, he thought he would mostly be living in the past.

Goossen was at Bethel College’s Kauffman Museum Aug. 27 to give a presentation based on his book, Chosen Nation: Mennonites and Germany in a Global Era, published by Princeton University Press earlier this year.

Speaking to a packed house, Goossen noted, “I thought this [research] would be primarily historical, about things relegated to the distant past. I thought we had moved beyond protests, marches, torchlight parades by white nationalists and neo-Nazis, the killing of peaceful protesters—sadly, that isn’t the case. I think it’s important to start with the Unite the Right rally in Charlottesville [Virginia, Aug. 12-13] as the backdrop to this presentation.”

In the talk he called “Are Mennonites German? Religion and Nationalism in the Global Diaspora,” Goossen began by noting, “It seems that Mennonites, traditional pacifists, would have had little or nothing to do with violent, nationalist movements. Sadly, this is not true.”

Much of his presentation was devoted to his own personal experience doing research in the Mennonite colony of Fernheim in the Chaco of Paraguay.

“Growing up, I remember hearing snippets about the Mennonite colonists in the Chaco,” Goossen said, “people coming from Europe, eastern Europe, the U.S. and Canada . . . to form [what some called] ‘a separate Mennonite nation.’ H.S. Bender [and other Mennonite leaders of the 20th century] saw the colonies as ‘a Mennonite state’ in the middle of the Paraguayan Chaco.”

The language they used was reminiscent of Zionism, he said, speaking of the creation of a state where any and all Mennonite refugees could come. That illustrates some of the paradox of Mennonites’ relationship with German ethnicity and German nationalism.

As Goossen returned to his consideration of white nationalism as raised by recent events in the United States, he said, “Mennonite engagement with white nationalism can’t remain only internal, only within the church. This is not a topic about which we can be complacent, as Charlottesville shows. We have a responsibility, and an ability, to bear witness.”
—Melanie Zuercher, Bethel College

Bethel College’s Mennonites and the Holocaust conference, March 16-17, 2018, will examine this and many of the other topics addressed in Goossen’s book and other, similar research. To learn more, visit mla.bethelks.edu/MennosandHolocaust. 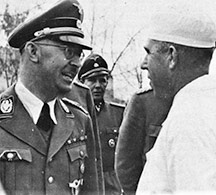