‘I eat your garbage’ 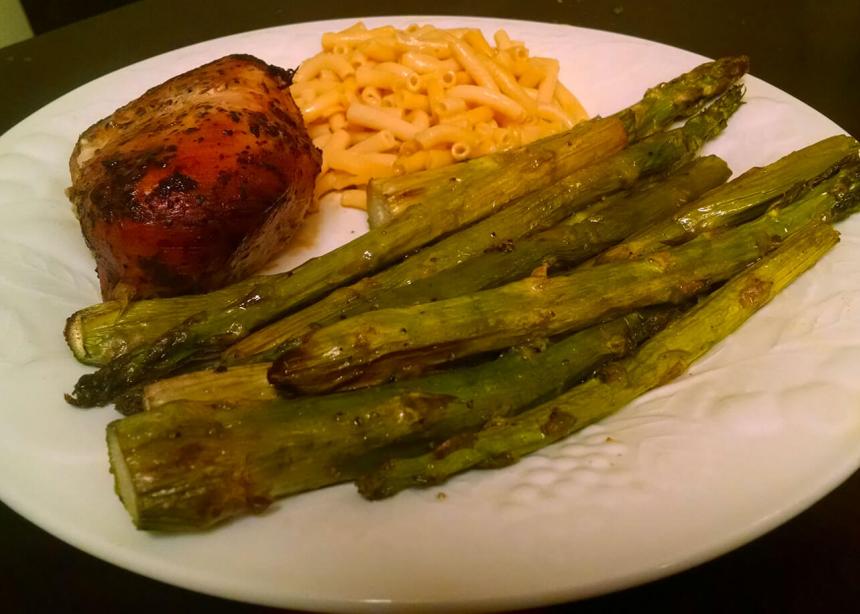 This meal brought to you by dumpster diving.

I am a thief. I steal our food system’s waste.

Let’s be clear. Grocery stores throw edible food into their dumpsters. I go to those dumpsters and jump in. I dig through boxes and bags, and salvage everything I can find. I take it to my house and painstakingly sort through it. I cut and clean vegetables and fruit. I repackage damaged and open packages of dry goods. I rinse and re-label canned goods. I dry herbs and peppers. I freeze bread, meat, cheese, vegetables, fruit and almost everything else.

The last time I purchased groceries was a year ago because I can find everything in the garbage. And I eat your garbage. In fact, I have so much food that my spouse, my friends and my greater community cannot eat it all.

We began operating a donation-based community food share in our church basement at Sargent Avenue Mennonite in Winnipeg. We have moved 1.8 tonnes of food through its refrigerator since last June. Remember that this food is what is left after we give our friends as much as they can reasonably store. Our fridges are packed and our freezers often don’t close properly.

Why is there a single hungry person on the planet when we waste this much food?

Farming is a resource-intensive human necessity, involving labour, water, fertilizer, fossil fuel and soil. It’s entirely disrespectful to expect a worker to bend over, cut and trim a head of lettuce, and place it on a conveyor for you to look at it in the store, say it’s not good enough and allow it to be thrown into the garbage.

Every time I reclaim, sort and eat food, I remember to respect the humans who are responsible for getting the food to me. I prayerfully remember the first time someone picked up that lettuce from the dirt.

Foraging for food around the city regularly leaves me discouraged, angry and, at times, feeling hopeless. Our society is wasteful, gluttonous, irreverent and self-serving. You probably aren’t aware of the amount of food you waste simply by living in our “developed” economy. Over a third of the food produced in our world is wasted, according to the Food and Agriculture Organization of the United Nations. Europe, Canada and the U.S. are the worst offenders.

The facets of this waste are numerous. According to the David Suzuki Foundation, impossible esthetic standards force growers to cull and trash 30 percent of their products because grocery stores will not purchase blemished fruits and vegetables. Grocers abide by ridiculously arbitrary “best before,” “sell by” and “use by” date-stamping standards, which increase profit margins by requiring food to sell faster.

Governments are generally responsible for food-date standards, but these dates, among other factors, have enabled food-safety illiteracy. In a society that discards food past its “expiry” date, we have lost touch with our creativity and resourcefulness when it comes to nourishment. When milk begins to sour, make yogurt or cottage cheese. Once it has soured, bake with it.

What is perhaps even more jarring is that you are participating in this culture of food ignorance. According to a 2014 report by VCM International, Canadian consumers are responsible for 47 percent of the national food waste. We purchase food, it gets forgotten about, doesn’t get used and then we discard it. We are literally throwing money away. There might as well be a dumpster in front of the grocery store so you can throw food away before you waste energy keeping it cool in your refrigerator.

So I dive. For one, I have as much food as I could ever want and hope to share with friends and strangers alike. I have become more hospitable and give more of my food and myself to those around me.

What do I find? It may be bread, grapefruit juice or yogurt, or it might be bacon, avocados, brie, orange pekoe, pâté, a box of mangos or a pallet of red bell peppers.

This uncertainty has inspired more creative food preparation, learning about food storage and the discovery of new ingredients. While many young adults go for drinks or to movies at night, I enjoy late evenings with friends reclaiming, cleaning and growing a sub-culture and community around society’s trashed food.

If you have the chance, try it sometime. Or you could help me with my next task: working to educate the church, the public, politicians and policy makers, in an effort to bend the system toward better practices.

I’ve been hounded to explicate the theological underpinnings guiding my actions. Why should I? Would it be better to write an essay in the presence of hungry people or to present them with food? Did Jesus’ disciples learn more from his words or from his behaviour? What is Christ’s call in the midst of injustice?

I could talk to you for hours answering these questions, but you’ll have to come dig in the garbage with me first.

This meal brought to you by dumpster diving. 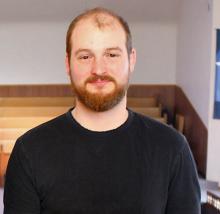 Thanks to dumpster diving, Nathaniel De Avila hasn’t had to purchase groceries in the past year. (Photo by Aaron Epp) 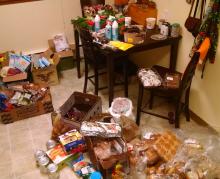 Nathaniel De Avila and his friends operate a donation-based community food share at their church. They have moved 1.8 metric tonnes of food through this refrigerator since last June. (Photo courtesy of Nathaniel De Avila)

Good article, giving increased awareness of our current attitude towards food.
There are groups who are addressing this in a huge way.
Check web site: Fraser Valley Gleaners. There is a similar project in the Okanagan and several in the Leamington, ON area.
This is a beginning.

My father used to go to the grocery stores and collect the discarded lettuce leaves that he fed to the cattle on our small farm. And stale bread tastes much better if it is toasted. In my community, however, the grocery stores lock their dumpsters eh. We do have a Foodbank where some do donate food? Foodbank, however, were to be a temporary solution to poverty eh.

in 1996 i visited a farm, on the outskirts of Basel called Spittelmatt. The farmers were Mennonites. already then, farmers, the Swiss Farmer's Union and health authorities had worked out a system whereby Farmers were paid to feed food waste to pigs.

the materials were collected 2-3 times a week.

placed in a cauldron and heated. then fed to pigs in a simple vacuum system.

tonnes and tonnes of food waste was recycled in this way every year. the pigs were slaughtered and processed right on the farm. all waste was composted and recycled, and the land upon which the recycling took place had wells from which the city of Basel took water. These things are possible only when regulatory bodies favor local solutions instead of industrial homogeneity.

for example, when the gleaners in Abbotsford were trying to get a permit for their building, the civil authorities said it was impossible because there were no bylaws for non-commercial food processing. It took some strong language and a sympathetic mayor to orient the municipal civil service towards 'yes.'

i can testify that the soup mix made at the gleaners, and the sausage from Spittelmatt were both excellent.