Signs of welcome in Ontario 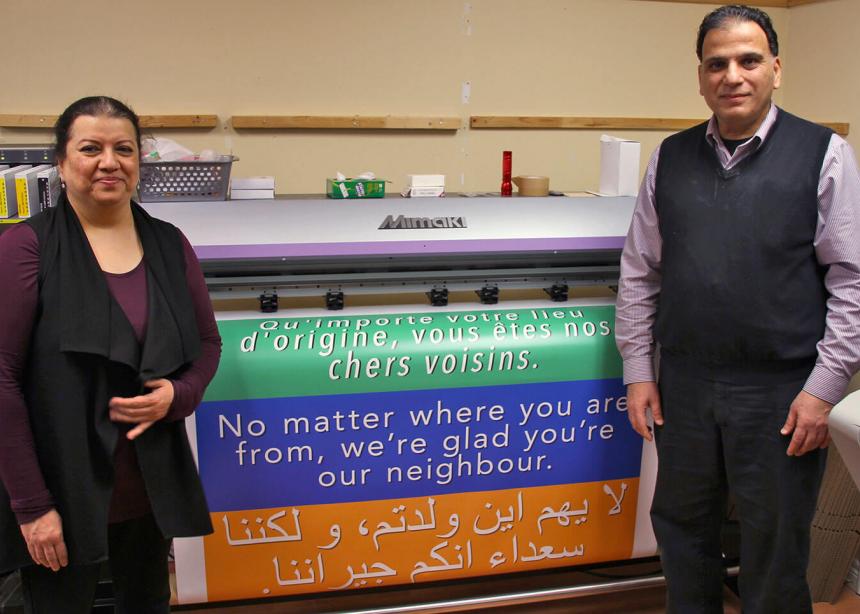 Rebecca Yoder Neufeld of First Mennonite first saw the sign in Elkhart, Ind., last November. A trip to Anabaptist Mennonite Biblical Seminary in January by a group from the church galvanized their desire to bring the signs to the area church.

The signs originated at Immanuel Mennonite Church in Harrisonburg, Va., and have spread to many places in the United States. Immanuel has purposely not copyrighted the sign and has pdf files available on its website.

The sign has been changed to the Canadian spelling of “neighbour,” and the original Spanish was changed to French. The Canadian version of the sign is especially poignant after the Jan. 29 shooting deaths of six Muslim men in Quebec City.

When First Mennonite and MC Eastern Canada looked for a printer, they approached Enviro Digital in UpTown Waterloo.

Zafar and Laila Ismaili have run the business since 2007. Married in Kuwait in 1985, the couple moved to Waterloo in 1996 from England. Immediately after arriving, their son Haroon (Aaron in English) became ill with an undiagnosed abdominal sickness. Over the next few years, many people helped them.

Haroon loved horses, and the Old Order Mennonite farmers from whom the Ismailis bought produce and milk allowed him to ride and be among their horses. A Mennonite nurse arranged that one day when Laila came home from Toronto with Haroon, someone was waiting in the driveway with food for them. For five years, they drove back and forth to Toronto, until Haroon died in 2001.

The couple continue to have friendships among Mennonites all these years later, even though they are Sunni Muslims, because they were made welcome in the community by their Mennonite neighbours.

The Ismailis donated 55 signs of the first 750 printed to the cause. As of press time, more than a thousand signs have gone out of the area church office, keeping Brent Charette, MC Eastern Canada’s operations and church engagement minister, hopping.

Lutheran and United churches in the area have also been promoting the signs, which are springing up all over Waterloo Region.

In a letter to congregations, David Martin, the area church executive minister, wrote, “This is an initiative that strongly resonates with MC Eastern Canada’s focus on ReLearning Community and God’s call to reach out to share our faith and values with our neighbours.”

MC Eastern Canada has also invited the other area churches across Canada to join in this initiative.

For more background on this story, see:
Yard signs say all neighbors welcome
An apolitical sign for these political times
‘Welcome Your Neighbor’ sign continues to spread around the nation, to the delight of its creators at Immanuel Mennonite Church 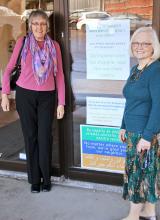 Thanks for the interesting stories in March 13 Canadian Mennonite.

It is a privilege to report on the many ways in which God is at work in the world, through the people and organizations that call themselves Mennonite.
--Web editor, for the rest of the CM staff