Remembering the mothers of the ‘disappeared’ 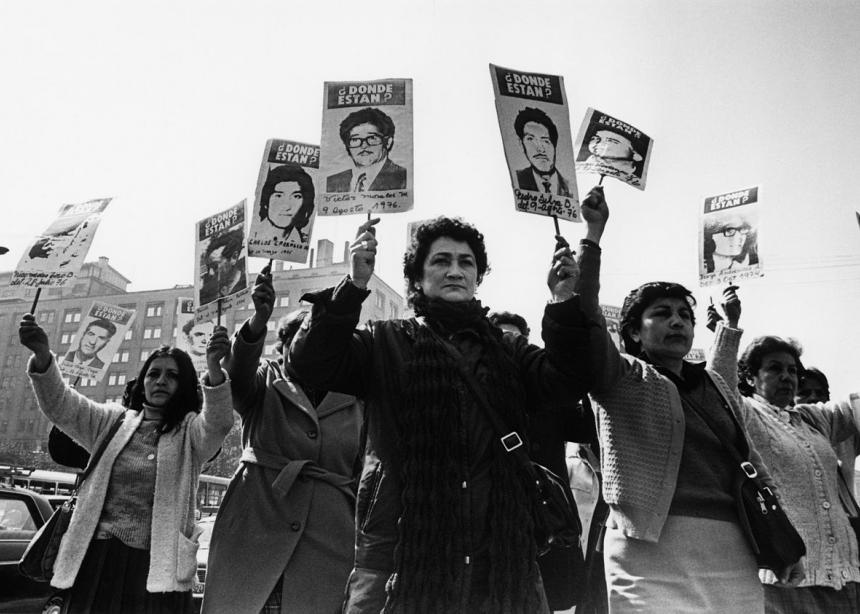 That’s quite something for a seven-year-old to know about, even without fully understanding it.

Lately, I’ve been revisiting this context as part of an undergraduate course I’ve been teaching on theologies from the global South or so-called “Third World.” A number of Latin American feminist theologians we read mentioned a group which courageously resisted and protested the violence of the dictatorships in various Latin American countries: the mothers of the “disappeared.”

As a parent and an advocate of peace and nonviolence, it’s been profoundly meaningful for me to remember the witness of these women. In Argentina, the Madres de la Plaza de Mayo (Mothers of the Plaza de Mayo) gathered in the city square of that name in the 1970s and 80s, when such gatherings were forbidden. They held up signs asking for their disappeared children to be returned, even while knowing that most of them had been killed.

In Chile, mothers also gathered in the capital city, holding pictures of their disappeared children, asking where they were, refusing to forget them. Some of these protests took an artistic turn, as some danced a solitary version of the cueca, the national dance of Chile, usually danced in couples—a poignant performance of their grief and protest against the loss of their family member(s). Others took to sewing arpilleras or small embroidered tapestries of the scenes of violence, torture, and protest happening under the dictatorship, using a traditional women’s folk-craft—usually used to depict pastoral, agrarian scenes—to spread the word about the repressive violence in their country.

Brazilian theologian Maria Clara Lucchetti Bingemer speaks about the Argentinian mothers of the disappeared seeing themselves as “carrying forward their children’s work” for social justice. In this way,

They were only a group of women, mothers and grandmothers, who, in Buenos Aires, during the bloody years of military dictatorship, advocated for their lost children and grandchildren who had “disappeared” into the abyss of torture and death. Claiming something which belongs essentially to the private sphere, and brandishing in the face of the dictator nothing less and nothing more than the violated right of their motherhood, they created a political force with major repercussions. It was perhaps, the most eloquent and the best understood outcry against those terrible, dark years in their country and continent. Moved by reasons which were apparently strictly ‘private,’ the Mothers of the Plaza de Mayo emerged politically with new goals and challenges, giving birth to redemption for their whole people, born from the personal, inconsolable pain of losing their children.[1]

Though Bingemer focuses on the dynamics between the supposedly “private” role of mothering being made “public” and political in this way, for me, there is also another, more Anabaptist significance to these protests: they’re ways of nonviolently resisting dictatorships.

Think about it: “armed” with nothing but their identities as mothers—i.e., givers of life—these women stood up to military dictators, to regimes of unspeakable torture and violence. Those who gave life from their own bodies thus stood as witnesses to the God of Life, confronting those who would presume to take away life, to do away with the lives and bodies they, as mothers, had co-created with God.

As theologian Elizabeth A. Johnson has argued, these women bring to mind the story of Mary of Nazareth,[2] who, along with the other women at the foot of Jesus’ cross, was participating in a similarly courageous act of witness to the nonviolent, life-giving power of mothers in the face of violent occupation and torture.

Like the mothers in Argentina and Chile, wasn’t Mary also publicly and nonviolently resisting the Roman occupation by refusing to leave her child’s side as he was tortured to death for being a political dissident?

Thus, the mothers of the disappeared appear in the public square, interrupting the violence of dictatorships with their grief. Like the biblical Rachel, each of these mothers “refuses to be comforted for her children, because they are no more” (Jer. 31:15, NRSV), and in so doing mixes lament and profound hope in the God of Life.

As we approach Mother’s Day, this resonates with me. There’s something about the children in our lives that inspires our unswerving commitment to life, to hope for the future of God’s peace, and to contribute to it any way we can, no matter the costs. Because, after all, our God is the type who stands with mothers and grandmothers in the public square, protesting the tyranny of dictators and strengthening their hope that “life may triumph over the powers of death.”[3]