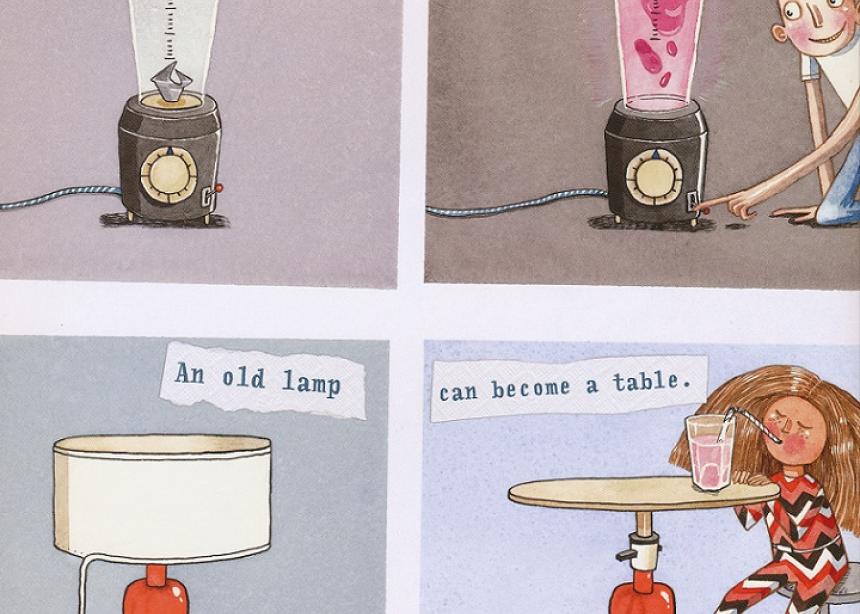 A page from the children’s book The Dumpster Diver, by Janet S. Wong, illustrated by David Roberts.

Being a parent, I’ve found, can be profoundly clarifying in terms of what aspects of faith one finds most meaningful, and therefore most worthy of teaching to one’s children. One aspect of the Mennonite tradition that has shaped my faith profoundly is the ethic of simple living, of living in ecologically-sustainable and socially-just ways, of living more-with-less. This is something I want to pass along to my two-year-old son.

You may have seen my feature piece in the Canadian Mennonite magazine about Doris Janzen Longacre, the author of the More-with-Less Cookbook and its companion book, Living More-with-Less (see “Cooking up Discipleship”). In it, I talked about Longacre as a theologian and the implications of viewing more-with-less as a theology or as theological ethics. And while her five life standards—“do justice, learn from the world community, nurture people, cherish the natural order, nonconform freely”—provide plenty of food for thought for mature minds, I was left wondering, how does one go about distilling these complex notions into something a toddler can grasp?

Aside from the ways in which this is modelled within a household, family, and community—I’m thinking simple family meals and hospitality, frequenting thrift shops and libraries more often than shopping malls, walking/cycling/taking public transit more than driving, growing food in a garden, etc.—I found a couple of books that can introduce more-with-less type ideas to young children.

This book is about three kids and their neighbour, Steve, who together dumpster-dive for “treasure” or “useful junk” in the dumpster behind their apartment building. They rescue the items, clean, and make them into something new. It’s the old adage, one person’s junk is another one’s treasure, but in story form! The book thus valuably interrupts the usual, wasteful messages of our consumer culture—that disposability, novelty, and convenience are best—replacing them with an alternative narrative which values the skills of salvaging, repurposing, and recycling.

At one point, a different neighbour even berates Steve for his failure to participate properly in consumer capitalism. She “says Steve is crazy—too lazy to work hard to make enough money to buy new stuff at the store like good people should. She says his apartment is FULL OF JUNK!” Steve simply replies: “Junk is good!” and is pictured contentedly in his colourful and quirky apartment.

I especially like this book’s emphasis on creativity and imagination—of looking at something and seeing its potential for transformation. I also like that the kids make their own fun together and sometimes make things to give away to other people who need them. True to its message, the book is also beautifully illustrated, with the text collaged onto the page on everything from duct tape to paper doilies!

You can read the author’s motivation for writing the book (and download a teacher’s guide) here.

Joseph Had a Little Overcoat by Simms Taback (Viking/Penguin Books, 1999)

You may be familiar with the book Something from Nothing by Phoebe Gilman (available at Common Word Resource Centre. Well, Joseph had a Little Overcoat is an award-winning retelling of the same classic Jewish story about avoiding waste and making do. In this version, a man named Joseph starts out with an overcoat, which then becomes a jacket, then a vest, then a scarf, etc., until there’s just enough fabric left to make a single button. When that’s lost—spoiler alert—there’s still enough there to tell a good story!

The collaged illustrations patch together vibrant scenes, Joseph’s overcoat is transformed through cut-outs in the pages, and, interestingly, it ends with a song! You can take a look at the book here.

Like The Dumpster Diver, but from a more explicitly faith-based perspective, this story interrupts the wastefulness and consumerism of our society, teaching children to recognize the long-term warmth, beauty, and usefulness of clothing. Placing value on the creative skills of sewing, altering, and mending, the book encourages kids to make clothes last as long as possible—a stark contrast to the whirlwind pace of the whole-new-wardrobe-every-season fashion industry, with its grossly unjust labour practices.

While these values have their roots in necessity, arising from the historical Jewish experiences of persecution and displacement, they have become part of the Jewish tradition in a similar way as other people’s experiences as refugees shape their orientation toward simplicity, conservation, and frugality. (One could include Germanic Mennonites here.)

But today there is another layer of importance to teaching children to live simply and avoid wastefulness—namely care for God’s wounded and polluted Creation. As it states in my copy of Joseph Had a Little Overcoat (which I fittingly found in shreds at a thrift shop and taped back together), “A core Jewish value is bal tashchit, an injunction against wastefulness and a commandment to preserve our Earth. Jewish laws guiding us in environmentally responsible ways are ancient, but are arguably more significant today than ever before.” I hope Christians remember that many of these Jewish laws remain part of our Scripture, too.

In my view, both of these books are profound reflections of Longacre’s more-with-less theo-ethics, but geared toward young children. I encourage you to look for them in resource centres, libraries, or thrift shops, and to share them with the kids in your life, whether at home, church, or school, making sure to follow up with acts of salvage or mending, of course! 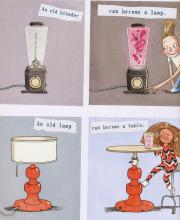 A page from the children’s book The Dumpster Diver, by Janet S. Wong, illustrated by David Roberts.