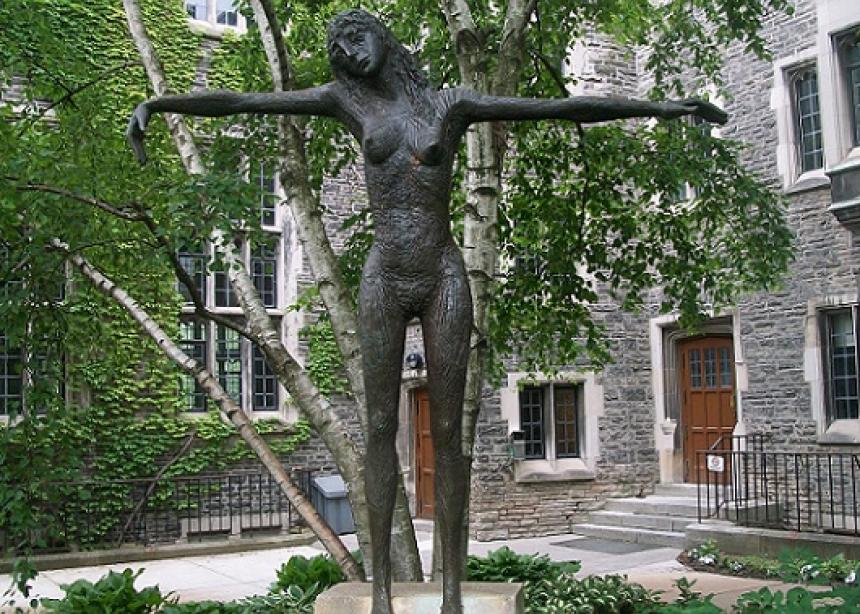 The sculpture above stands on the grounds of my theological college, Emmanuel College in Toronto, of the United Church of Canada. I used to walk by her almost daily, on my way to class or the library. She has become more and more meaningful to me as I’ve learned more about her and as my knowledge of feminist, womanist, and other liberation theologies has deepened. Now that I’ve moved away from Toronto, I miss her, and I find that she is missing from a lot of our theological reflection on the significance of the cross and Easter as well.

Her story is an interesting one. According to theologians Doris Jean Dyke and Julie Clague, artist Almuth Lutkenhaus-Lackey sculpted “Crucified Woman” simply as an expression of women’s suffering. It was only reluctantly that she lent the sculpture to a United church in Toronto for Easter one year, unsure of whether she wanted it interpreted theologically. She was overwhelmed by the response, especially of women who for the first time, saw “their suffering, their dying and their resurrection embodied in a woman’s body,” and thereby felt God’s solidarity with the suffering specific to women.

Of course, not everyone interpreted the sculpture this way. Some saw it as heretical, too distant from the male body of the historical Jesus of Nazareth. Others saw it as too sexual, as it depicts a nude female form. Others saw it as reifying instead of protesting violence against women. [1]

But the responses of many women, including many survivors of sexual and physical abuse, told a different story. For instance, in 1989, upon hearing of the Montreal Massacre of fourteen women engineering students at the Ecole Polytechnique, hundreds gathered around the “Crucified Woman” to remember the victims and—and for some—God’s solidarity with them.

Feminist theologian Mary Grey explains that “Crucified Woman” “liberates not by . . . proclaiming that there is an innate redemptive quality in [women’s suffering]; but by being present with and sharing in the brokenness, identifying this as the priority for God’s healing love, Christ gives hope, empowers, and enables the process of resistance.”[2]

May this cross, too, become part of our Holy Week reflections, allowing us to also lament women’s suffering and giving us hope that God’s resurrection will embrace all our bodies in their varied states of brokenness, and make them whole. 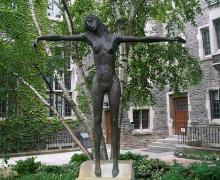 This sculpture had a very profound impact on me years ago.