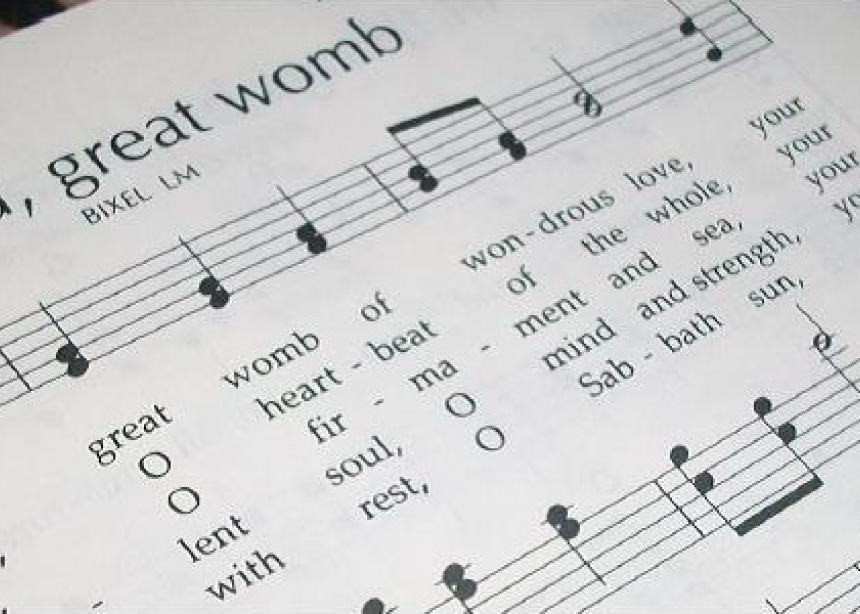 I’ll be honest right from the beginning: when it comes to music in worship, I’m a hymn-person. Always have been. Especially as a youth, when everyone assumed that because of my age I must be a fan of praise-and-worship music! It’s one of the things that I love about worshipping in a Mennonite congregation: the sense of echoing the faith of those who have gone before us in Christian history, the evocative, poetic theologies of several verses of carefully crafted lyrics, and, of course, the rich, four-part harmonies, blending many distinct voices into a communal act of praise.

But I had two experiences lately that blurred the lines between hymns and praise-and-worship or “contemporary” music and reminded me of what’s really important to me when it comes to music in worship.

I was visiting a more evangelical congregation and was fully expecting there to be praise-and-worship style music. Instead, I was surprised to see a pianist and a song leader, and hymns listed in the bulletin.

Well, it wasn’t quite the same. The song leader used a microphone, which raised her voice above that of the rest of the congregation. The congregation wasn’t given the music, only words, so we sang in unison. It felt more like we were singing along to the song-leader’s solo performance—in other words, the singing was lacking a robust sense of congregational participation, of communal unity.

The other experience was a visit to a Mennonite congregation which had a music-focused service. A blue-grass band led the worship, replacing the usual components of the service, even the sermon. Oh well, I thought before it started, I guess it’ll be more of a performance than a worship service. But to my surprise, it wasn’t. For one thing, the band itself sang in four-part harmony and asked the congregation to join in for certain parts of the songs. Though it was partly a performance, there was a real sense that all of us were worshipping, together—a sense that we as the congregation were participants in the music, not just spectators.

These experiences reminded me of an article I read a while back in The Atlantic about U.S. Mennonites and questions surrounding sexuality and LGBTQ inclusion. I found it fascinating that the author Emma Green, not Mennonite herself, was struck by the congregational singing in the Mennonite churches she visited; her online article is peppered with actual recordings of Mennonite congregational singing. (You can have a look here.)

After insightfully exploring the contradiction between the tendency toward schisms over disagreements in the Mennonite church and its reputation as one of the historic peace churches (i.e., experts in peacemaking and reconciliation!), Green ends with a quote from one of the Mennonites she interviewed. Despite the deep-seated disagreements over questions of sexuality, this person observed: “I think that’s one thing we’ve got going for us. . . . We can sing together.”

This example gets at why the tradition of harmonized singing in worship continues to be so meaningful to me—and also why it’s so poignant that our MC Canada LGBTQ inclusion group is named Harmony. Four-(or more)-part harmony expresses so well that we are one body but with many members, one community comprised of many individuals and their gifts; in other words, it affirms both our unity and our diversity as the church.

So in the end, it’s not really about whether we agree theologically with all the hymns, whether all the hymns say “we” instead of “I,” or even the particular style of the music. It’s singing together in harmony that expresses what words can’t, something beyond words. Maybe even a peace which surpasses understanding (Phil. 4:7).