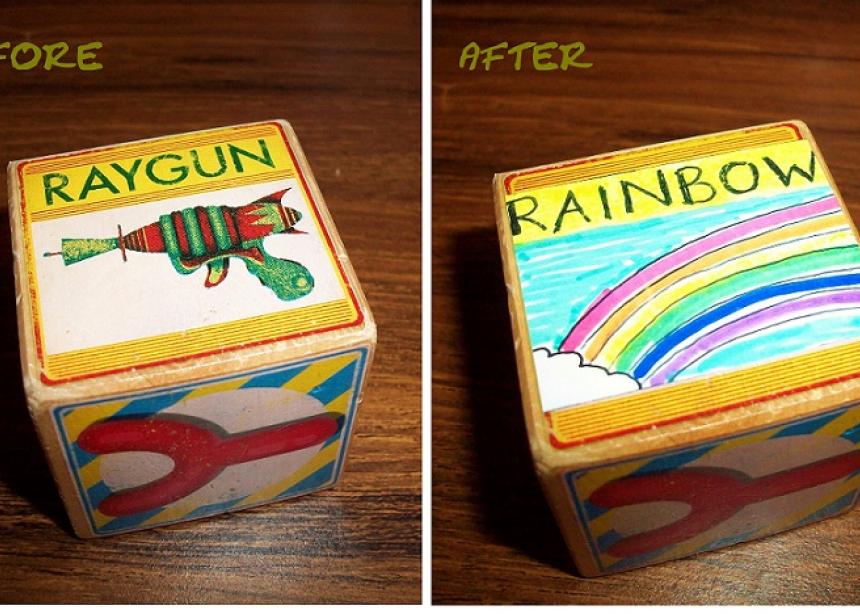 So my son, who is almost two years old, has a set of wooden building blocks—you know, the kind with the letters of the alphabet on them, along with pictures of things that start with each letter. Instead of the usual “A” is for “apple” and “B” is for “ball,” however, these blocks are a little more off-beat (a.k.a., “hipster”). For example, “K” is for “kazoo,” “V” is for “vinyl,” with a picture of an LP record, and, one of my personal favourites, “Y” is for “yard sale”! A dear friend of mine gave them to us as a baby-warming present, and I find most of them really amusing. There’s just one problem: in this particular set of blocks, “R” is for “raygun.”

I’ve written here before about my apprehensions surrounding raising a son in a culture which teaches boys that violence is integral to masculinity. See here.  This is just one small instance of the rubber hitting the road. So what’s a peace-loving Menno parent to do?

My first course of action was inaction: ignoring the problem. After all, he’s just a toddler—surely such things aren’t influencing him already. He doesn’t even understand what a raygun is yet (never mind that it’s a sci-fi reference). But whenever we played with those blocks, that raygun would inevitably end up in my line of vision, almost taunting me. And when my pastor came over for a visit, which block do you think he happened to pick up and look at?! Though my pastor was of course gracious and didn’t say anything, that was the last straw for me.

So, I set about doing some pacifist censorship, some creative graffiti, if you will. Since my son is particularly into rainbows right now (thanks in part to the Noah story, with the rainbow representing the covenant of peace between God and all creation–Gen. 9:12-17), I decided on that as a suitable substitute to represent the letter “R.” I created a sticker with a picture of a rainbow on it, and pasted it neatly over the raygun. (See the exciting “before” and “after” photos!) Problem solved, in the spirit of swords-into-ploughshares!

Now, you might be thinking about why I even bothered with this. I realize that this is just a drop in the bucket compared to all the violent toys, video games, sports, movies, pornography, etc., that my son is going to be confronted with in his lifetime, whether it’s through advertising on various media or through friends. A big part of it, for me, is that I want to get into the habit of following through on creating a home and family in which guns are not acceptable toys, because we believe in and try to live out God’s peace. That’s a message that I want to get through to my son.

But giving voice to that message takes practice and creativity and courage. So often it can feel like that voice is getting drowned out by all the voices contradicting it, propagating beliefs that violence is redemptive—some of which, I might add, even use the Christian tradition to make such claims!

In the end, then, maybe my little project wasn’t so much about my son, but about cultivating my own habits of fostering peace as a parent. Except . . . you know what? The rainbow block is now my son’s favourite. So I guess my little stunt didn’t hurt him, either.

Of course, you are right. Your instincts are most appropriate: changing the raygun into a rainbow is brilliant, creative and, while it might seem like a drop in the bucket, it is in the right bucket. After all, is not giving a weapon or the image of a weapon to a toddler tantamount to an endorsement of weapons? Sadly, there will be a cascade of these images from the world outside the home, but to not have them in the home is an important, if subtle, message for a growing mind.

Besides, it was a cute rainbow - well done.