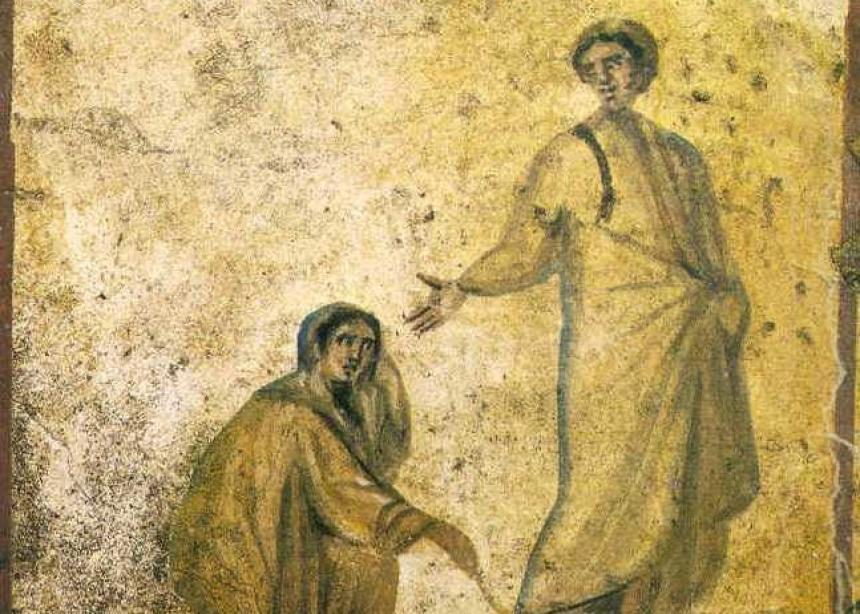 <p>The bleeding woman touches Jesus’ cloak, in an image from the catacombs in Rome. (Photo from Wikimedia Commons)</p>

Basically, I was affirming the feminist, womanist, and liberation view that sin does not only mean pride or the denial of one’s creatureliness before God, but also its opposite: self-denial, the failure to act against injustice, or the squandering of one’s God-given gifts. This is especially something which affects women and others who have historically been marginalized, and who have internalized that sense of powerlessness or even worthlessness.

“But what about Gelassenheit?” my friend asked, referencing the early Anabaptist notion of surrendering or yielding oneself to the will of God. “Doesn’t that precisely call us to self-denial?”

Well, in one sense. But as I said to him, it’s also a form of empowerment.

You see, Gelassenheit isn’t primarily about denying the self—it’s about fulfilling the self in God, in the ancient sense of the medieval mystics, who often talked about union with God as the purpose of human existence. It’s not about masochism but about entering into the deepest form of relationship with God. And this is, furthermore, not an escape from the world but empowers or enables us to do God’s work in the world, to follow the example of Jesus.

I think we’ve underemphasized this alternative, positive sense of power in the Mennonite tradition. We’ve talked as though the only Christian thing to do is to give up power, to let God have all the power and us none. We like the Philippians 2 model: Jesus “emptied himself, taking on the form of a slave.” There’s that servanthood ideal, that proper stance of utter humility.

And while I value the healthy suspicion of hierarchical, dominating, and violent power that such a stance brings, I think what Jesus taught and exemplified about power was a little more complicated. It wasn’t primarily about giving up power, but about transforming how power is understood in the first place: into the power of mutual empowerment, or of sharing power and building each other up, especially “the least” among us. [1]  This is sometimes called the power of solidarity and compassion, or the power of peacemaking.

One thing to pay attention to, which we often miss, is that Jesus has different messages for different people; in other words, it matters whom Jesus is addressing in his teaching and preaching. For instance, there’s the account of the rich young man who asks Jesus, “What must I do to inherit eternal life?” (Matt. 19:16-22). Jesus finally tells him to sell everything he has and give to the poor. In essence, Jesus tells him to cease being a rich young man, not simply to give up the privilege and power that his wealth affords him, but to share it with others, with the poor. And the rich young man is unable—or unwilling—to do it, and remains captive to his wealth.

But Jesus has very different words for someone marginalized, like the woman who had been hemorrhaging for twelve years (Luke 8:44-48 and the synoptic parallels). She, a woman considered unclean under the Law, touches Jesus’ clothes in the hope that he can heal her disease. He senses that power has gone out from him and asks who touched him. The woman is frightened and confesses. She’s expecting Jesus to publicly shame her for her audacity, for daring to take healing power from him in this way. Jesus does no such thing; in fact, he does the opposite. He empowers her, saying it wasn’t even his power that healed her but her own faith! “Your faith has made you well,” he says to her. “Go in peace.”

Do you see what he did there? Not only are we told that Jesus’ own power is healing and life-giving, but he also uses it to affirm and build up someone who was formerly invisible, to affirm her as a woman of faith and courage.

This is a radically different and counter-intuitive understanding of power—it’s the power of compassion and the empowerment of those who were formerly powerless.

So by all means, especially for those of us enjoying our privilege, Jesus presents a challenge: “the first will be last.” I take this to mean that our hoarding of power for ourselves is tripping us up; that’s not the true meaning of power but its distortion. But let’s not forget that for the many suffering and marginalized ones he encountered, Jesus had a different message, one of comfort and empowerment: “The last shall be first” (Matt. 20:16 and parallels).

[1] For an important discussion of this redefinition of power, see Dorothee Soelle, Thinking about God: An Introduction to Theology, trans. John Bowden (Philadelphia, PA: Trinity International, 1990). 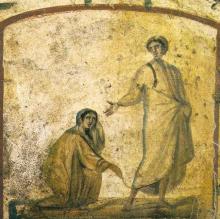