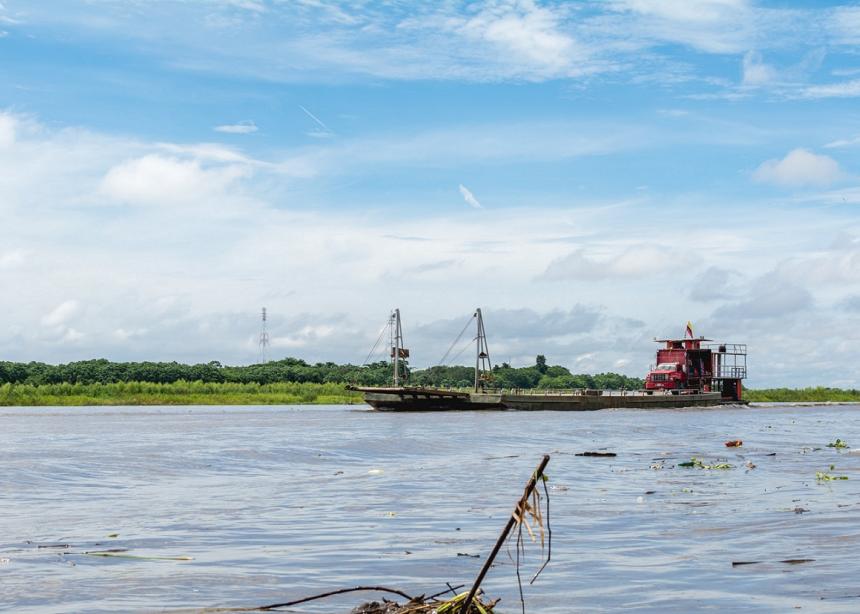 Mary Magdalene is one of the most controversial and mysterious biblical characters. She often gets a bad rap. She was pegged as a prostitute and temptress by Pope Gregory I, and her reputation remained tarnished for around seven centuries before biblical scholars redeemed her by untangling the three women whose stories Gregory had merged. It was not until 1280 that she was recognized as a leader and canonized by several different church denominations.

Though we know very little about Mary’s life, we do know that she was a person of importance to Jesus. He cast seven demons out of her, and chose her to be one of the first people to see him after the resurrection. Her story is an interesting one to contemplate as I travel along El Rio Magdalena, a beautiful river named after her. The river has a similarly tainted reputation.

The Magdalena is Colombia’s longest river and stretches from the most southern tip of the Huila department in southern Colombia to the Caribbean Sea. The river is CPT’s main mode of transportation between Barrancabermeja, the city where we live, and the communities that we accompany. Its banks are peppered with trees, fishing canoes and water taxis travel lazily past each other, and children swim in the murky water. As an outsider, it’s difficult for me to imagine the scene without the present atmosphere of tranquility. Those who have lived along the river’s banks for more than ten years, however, see it differently.

A pattern of conflicts in the region began in 1948, with a 10-year civil war that was so gruesome it was simply called La Violencia or The Violence. This conflict continued to smolder throughout the 1960s. In the 70s the demand for recreational drugs began to increase in North America, and Colombia became a popular location to cultivate coca and marijuana. By the 80s Pablo Escobar’s reign as the most powerful drug lord in the country was in full swing, and the Medellin and Cali Drug Cartels were competing for control of the Magdalena River.

During the next decade it became a passage for ships with cargo holds filled with drugs, and a popular dumping ground for corpses after massacres. It was not until the mid-2000s that the region became relatively stable. The paramilitary had pushed the guerrillas out of the Magdalena Valley, and the battles had moved to the mountains. However, guerrilla groups and ex-paramilitaries are the likely perpetrators of massacres that continue to occur to this day.

Today, as boats approach the Barrancabermeja water taxi dock, the first thing that is visible on the western coast is Ecopetrol—the biggest oil refinery in the country. The refinery’s collection of weaving pipes and grey smoke stacks are a dismal reminder of what is going to become of the Magdalena in the next two years. On July 28, 2014, a Chinese business signed a contract with the Colombian government. It will be dredging 909 kilometers of the river so that bigger transport freighters can travel from the refinery to the Atlantic Ocean. Though the news is good for city dwellers searching for employment opportunities in the oil industry, it is daunting for fishing and farming communities that depend on the river’s delicate ecosystem for subsistence.

Will the Magdalena eventually be freed of its demons and soiled reputation the way Mary Magdalene has been? Who can say? Those who fish and live off of the river however, hope that they will not be condemned as she was. Though it is no longer in the center of a civil war, the Magdalena is still being polluted and used as a tool to ship illegal goods. The destruction of an ecosystem and a culture is perhaps more difficult to undo than Pope Gregory's words.

Nueva Esperanza, Garzal, Guayabo, and Las Pavas—the four communities along the river that CPT relates to—remain strong in their commitment to defend their land and the traditions of sustainable fishing and farming. They have survived droughts, plagues, being threatened, civil war, being displaced, and being attacked by various armed groups. This new influx of big businesses vying for their land is just one more challenge that they will face together.

Your Grandmother and I are really enjoying these articles. They are well written and always interesting.

Cass, I appreciate the way you tied your neighbours' stories back to a biblical story of redemption. The people and places we think of as 'troubled' have so much more to them than that. Thanks again for your writing.