Act before it’s too late 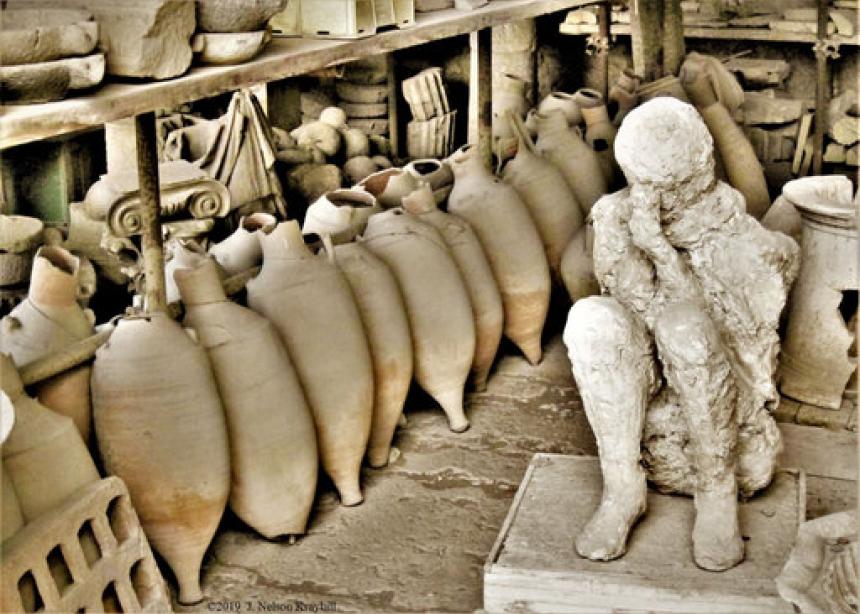 The man sits as he died 2,000 years ago, in a position that looks like weeping. Surrounding him are amphorae jugs used to import wine, olive oil and fish sauce that fed the huge appetite of Rome at the centre of empire (Revelation 18).

Somewhere an angel sounded a trumpet in AD 79, “and there followed hail and fire, mixed with blood ... thrown upon the earth” (Revelation 8). Mount Vesuvius on the coast of Italy erupted, sending molten pumice and smoke more than 30 km. high. Ash buried Pompeii. Side-wind to the eruption, the town of Herculaneum seemed spared. Then the ash column collapsed, launching a wave of gases that incinerated the town.

Pliny the Younger wrote, “You could hear the shrieks of women, the wailing of infants, and the shouting of men. Some were calling their parents, others their children or their wives, trying to recognize them by their voices. People bewailed their own fate or that of their relatives, and there were some who prayed for death...”

News of the cataclysm spread quickly, surely reaching a Christian leader named John who later wrote the book of Revelation. His vision has enough scenes of fire from heaven, mountains sliding into the sea and human anguish to suggest that Vesuvius provided some of his source material.

Thousands died from Vesuvius, but many more did not perish because they acted immediately at the first signs of danger.

Immediate action also is a theme of Revelation. It is possible that Revelation is not so much a prescription of end-time sufferings as a description of what will happen if humanity does not change course. At least some of Revelation’s plagues are caused by human sin: imperial conquest, war, famine and death. Sin knocks the planet off balance, and eventually the whole cosmos wobbles out of control.

That man still seated at Pompeii is a plaster cast, made by archaeologists who found voids in the solidified ash. When the empty spaces were filled with plaster, human forms emerged. Encased in volcanic ash, victims had decomposed and disappeared over the centuries. They did not cause the disaster, but did not or could not act when danger appeared.

How are we responding to threats to our world? We have (some) time to act. Christians live in hope for when God will “make all things new,” hope not only for the future. Paul says, “if anyone is in Christ, there is a new creation: everything old has passed away; see, everything has become new!” (2 Corinthians 5). Present tense verbs!

Horrors of Revelation do not have to happen; the vision calls humanity to change our ways and avert disaster. “Wake up ... remember what you have received and heard ... and repent!” (Revelation 3)

J. Nelson Kraybill is the president of Mennonite World Conference. 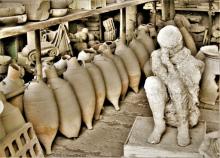 As a “Special to Canadian Mennonite,” CM published an article/blog on Feb.06/20, entitled “Act before it’s too late,” by J. Nelson Kraybill. Kraybill is the current President of Mennonite World Conference, an umbrella organization for 1.4 million Mennonites world-wide.

This same article was earlier published on Feb. 04/20, on the Mennonite World Conference website under the headings Stories and Resources, “From Our Leaders.”

Prior to the Mennonite World Conference publishing of this article, the “Act before it’s too late” article by Kraybill was published on Dec.28/19 on the website peace-pilgrim.com.

Peace-pilgrim.com features advertising for learning tours/trips to the “Holy Land” for Christians/Mennonites and others who are interested in seeking out the sacred places of Judeo/Christianity.

The peace-pilgrim.com site is linked to a site for an organization/company called Tourmagination.com, the site where the itineraries and costs are laid out for those interested in a Biblical safari type experience. This company, Tourmagination is affiliated with the Mennonite Central Committee; the reasons for this are explained in the website.

J. Nelson Kraybill, President of Mennonite World Conference is billed as a tour leader on at least two trips to the Holy Land for April and September of 2021. Costs of each trip vary, however an 8-11 day trip starts at $4,844.00, plus airfare.

The article “Act before it’s too late” is for me, a confusing piece of writing to say the least. It is difficult to understand what Kraybill means by “too late,” and he provides no leadership as to how we are to “act.”

Kraybill couches his message in eschatological and apocalyptic references to the eruption of Mt. Vesuvious (Italy) in 79 a.d. He notes that the city of Pompeii (12,000 persons) and the town of Heculaneum (4,000 persons) were both buried under ash. Kraybill makes the connection that John of Patmos (prisoner in exile), writer of the NT book Revelations could conceivably have been influenced by the eruption of Vesuvius event, and that John’s end-times, eschatological understandings were heavily influenced by it.

I believe it to be a specious attempt at fear-mongering to link the natural disaster of the eruption of Mt. Vesuvius (maximum persons killed 20,000) and John the Revelator’s end-times mysticism, to modern-day climate change.

The world did not end in 79 a.d. and quite likely will not end in the near future. Biblically we are counselled that no one knows when the world will end, “But concerning that day and hour no one knows” (Matthew 24:36).

Aside from the end-times eschatological flavor of Mr. Kraybill’s writing, it seems that Mr. Kraybill is not too concerned about “the end of the world as we know it” happening in the near future.

In spite of Mr. Kraybill’s dire predictions and end-time allusions, many of them connected to climate change, Mr. Kraybill continues to make plans for the future, plans which include considerable financial outlay, as well as considerable air travel at the expense of the environment.

If indeed his article “Act before it’s too late” is to have any application to the 1.4 million Mennonites under his leadership, Mr. Kraybill needs to identify specific actions Christian Mennonites should take. The frenetic and frantic tone of his article does nothing to provide any direction for anyone.

If we are to “repent,” as Mr. Kraybill suggests, what exactly are we to repent from, and how are we to then act accordingly?

Fear-mongering is no substitute for leadership.

the response by mr reimer has troubled me for some days.

how is it that the persons called to uphold the gospel of Jesus Christ offers us a vague repentance that leaves any thoughtful person say 'yes' to some sort of a response, but no guidance as to what that response might be?

it seems progressive leaders offer hope mixed with shame, salvation mixed with guilt, and a vague 'we know the way' while leading pilgrims on tours for something short of 5 grand.

i submit that the gospel of Christ cleanses us from all unrighteousness, and unfortunately, too many of our leaders don't know -- that way--.