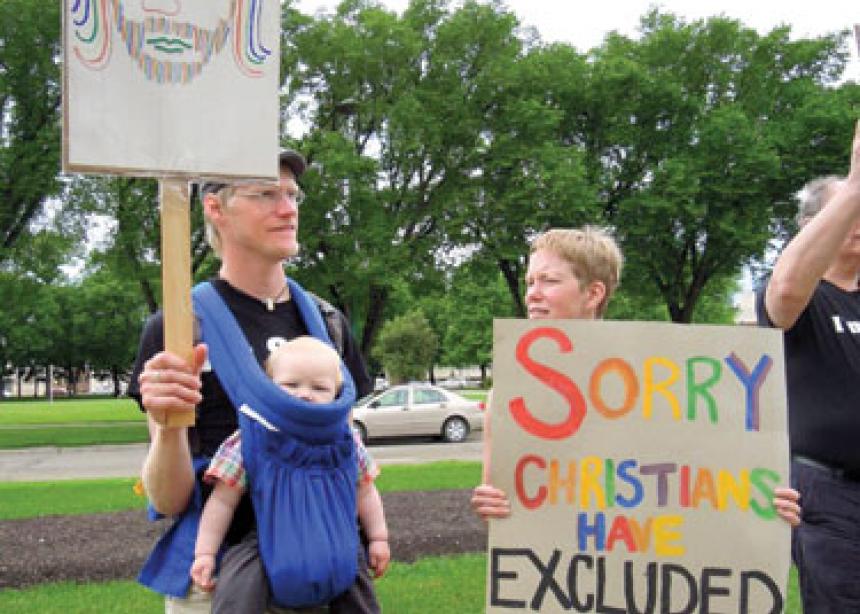 On June 3, a small group from Little Flowers Community and Hope Mennonite Church joined a crowd of upwards of 20,000 people who came out for the Pride Winnipeg Parade. They carried a simple message: “We’re Sorry.”

“The [‘I’m Sorry’] campaign is an effort to apologize to the LGBTQ [lesbian, gay, bisexual, transgender, queer] community for the ways Christians have mistreated them,” explained Jamie Arpin-Ricci, pastor of Little Flowers. “The goal is to offer an unqualified, sincere apology.”

Although Arpin-Ricci invited several churches from Mennonite Church Manitoba and other denominations to join in, he believes that the short notice probably did not give them enough time to consider the implications. Of the MC Manitoba congregations invited, only Hope Mennonite responded and participated. “A few from the other denominations responded that, for theological reasons, they wouldn’t participate,” he said.

“I heard from some people in our congregation who were interested in participating and we gave them permission to represent our church,” said Lynell Bergen, pastor of Hope Mennonite. “It is a different thing to say we are sorry that you did not feel welcome than to say we are an affirming church.”

Arpin-Ricci said, “It inspired us in Little Flowers because many of us have good deep friendships within the gay community. We felt [that] regardless of where one stands theologically on the issue of same-sex attraction, there is never a justification for this kind of treatment in the name of Jesus Christ, so we wanted to offer an unqualified apology. Not all participants in this campaign believe the same. There are some who identify as being fully affirming and others who do not.”

The evening before the parade, Arpin-Ricci briefed those who would be participating. “We didn’t want to do things that would not be helpful,” he said. “In many ways, it is a cross-cultural experience. We made the signs together purposefully so that we could collectively approve the messages.” For their efforts, he said, “We received humbling responses as we stood along the parade [route]. Some came over and told us stories about their experiences with the church.”

“I understand Hope Mennonite and Little Flowers,” said Ken Warkentin, executive director of MC Manitoba. “I understand their frustration and their willingness to be prophetic and call the larger church into the conversation and into action.

“Some congregations, particularly those who want to be welcoming and affirming, will feel that is the way God is calling them to be faithful and compassionate,” he said. “There are other congregations that understand a biblical mandate that prohibits homosexuality. I want to challenge both groups to be able to say, ‘We might be wrong.’ ” 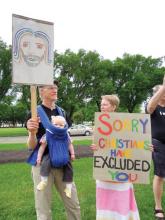 The Hague Mennonite Church believes in Leviticus 18:22-24; Romans 1:26-27; 1 Corinthians 6:9-20;
1 Timothy 1:9-10... etc!!! Yes we do love homosexuals... and for us, according to Jesus himself, the best and most precious way to show love to them is to tell the truth... It will literally free them from eternal punishment...
As to those "Christians" who agree with what is happening, it seems to me that judgment has already begun!! Romans 1:28-32 explains it well!!!