But don’t expect it to solve all church disputes . . . at least not immediately 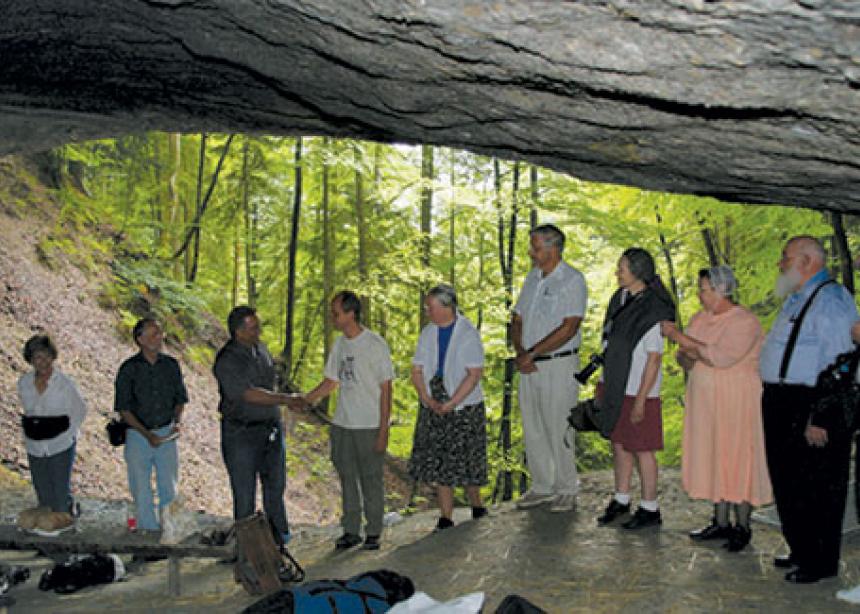 Using the word “discernment” is a shift from a more modern decision-making paradigm to a postmodern one. In the modern paradigm, right or wrong answers would be found through discussion, fact-finding and, finally, a vote. Discernment, on the other hand, points to a more fluid, multi-faceted and potentially nuanced end point—or perhaps no end point, just further process.

Discernment in the Bible is a process of testing or proving, of putting something to the test and examining the results. The word in Romans 12:2—“be transformed by the renewing of your minds, so that you may discern what is the will of God—what is good and acceptable and perfect”—has this meaning of testing. It’s like checking to see if the water in the pool is warm enough for a comfortable swim. We use a thermometer and then dip in our foot to discern if we want to venture further.

This kind of discernment is seen in a movie about medieval times when a character bites a gold coin to see if it is gold all the way through or only brass coated with gold. Discernment is a process of finding out if something is dependable, true or supportable.

The church in the Book of Acts had to discern a number of important things: In Acts 1, the church needed to find a replacement for Judas to return the number to twelve apostles. In that time, this person needed to be a man, and needed to have accompanied Jesus from his baptism until his resurrection. The group proposed two men who fit the bill and then chose between them by using some form of chance—drawing straws or rolling dice. But they first determined that they needed a witness. In other words, there were requirements for this position on which the discernment was based.

Five chapters later, some of the widows in the church were being missed in the daily distribution of food. The work had gotten so large that the apostles could no longer get it done, so they proposed that the community choose seven men to do the work. (I suspect that was how many men would be needed to do the work.) But they suggested that these men should be of “good standing, full of the Spirit and of wisdom” (Acts 6:3). The congregation then chose the particular men based on these suggestions.

In both cases, there were requirements in solving the issue. The people chosen needed to fit those requirements in order to do the work well. The people doing the choosing—or discerning—needed to voice their opinions on the suggested candidates based on the requirements they had set: the need for a twelfth witness to Jesus’ life, death and resurrection; and wise men of good standing who could be trusted with the food distribution.

In either case, the congregations could have challenged the proposed requirements. In Acts 15, though, the church went through a process of discernment where the requirements themselves were at issue.

Paul, Barnabas and Peter had been going around teaching and preaching about Jesus as God’s anointed servant. In the course of this work, all of them had moved to accept non-Jews into the church when they believed in Jesus, even when they did not first become Jews.

But some members and leaders in the church found this in contravention of previously held and revealed requirements to be part of the people of God. Luke tells us that “some believers who belonged to the sect of the Pharisees stood up and said, ‘It is necessary for them to be circumcised and ordered to keep the law of Moses’ ” (Acts 15:5). Gentiles can be Christians after they become Jews, some thought, while others thought that God has accepted them as they are, and they don’t need to first become Jews. Luke tells us that there was significant debate, perhaps even argument and disputation, around this, first in Antioch and then in Jerusalem.

There were a few steps to their process of discernment:

It’s interesting that James’s decision included three stipulations on these gentile converts: no strangled slaughtering of animals (that left blood in the meat); no eating food sacrificed to idols; and an encouragement for them to “abstain . . . from fornication.” These three things were based on first-century Jewish biases against gentiles: namely, that all of them were idol worshippers; that the preferred method of killing an animal for sacrifice was through strangling, leaving the blood in the meat; and that gentiles were all sexually immoral.

If the gentiles continued with any of these practices, Jewish Christians could not have table fellowship with them. But if they stopped doing these things, then table fellowship was possible. The material was put into a letter and sent with Paul and Barnabas to Antioch and to the places where they had gone on their journey of spreading the news of Jesus.

Interestingly, we have no other reference to this letter or its contents in the New Testament, except perhaps one in Paul’s letter to the Galatians. Through the years, there were Jewish Christians who kept on demanding that gentiles first become Jews before they could be Christians, because they were not convinced by the discernment process. They did not feel it was “the Holy Spirit” who was guiding James and the church. Paul had to deal with them over and over, and the references in the seven letters to the church of Revelation to “synagogues of Satan” may be references to Jewish Christians who were claiming to be more God’s people than the uncircumcised gentiles decades after the Jerusalem Council.

It would seem that there were Jews in the Roman church who felt that they could exercise their Christian freedom and buy meat in the market which had first been offered to an idol. There were other Jews who had such deep aversion to this meat that they identified it with the idolatrous worship itself and could hardly sit at the same table with one who was eating it.

These two groups in the church—the eaters and the abstainers—were each believing that they held to the true good news of Christ, and the others were missing the truth. Similarly, some felt they could worship on either the Jewish Sabbath, the seventh day of the week, or on the day of resurrection, the first day of the week. Others were not so flexible.

Paul’s teaching in response was nuanced and difficult. Those who felt free, as he did, to eat meat offered to idols, were to forbear and be patient with those who could not eat. This was specifically designed to keep the various factions in fellowship with each other.

I do not expect that this meant that the eaters were expected to abstain when the abstainers were not present. The directive was to make fellowship possible in a manner similar to the rules handed down by the Jerusalem Council in regard to Jews and gentiles. Paul’s teaching did not choose between the factions, but allowed these deep differences to exist in the church as a way of encouraging mutuality and fellowship, a unity in diversity.

How do we hear God today?

Some would say a clear scripture passage can be found on issues and we need to obey. But when Paul wrote to the Corinthians about their worship, he challenged the idea that it is easy to hear God. When prophets in Corinth prophesied—spoke words they were hearing from God—they were to take turns, and they were to allow the other prophets and the gathered congregation to weigh or judge what is said (I Corinthians 14:29). Even direct words from God needed to be discerned.

I suspect that different prophets, like different preachers, had their pet topics on which they expounded, topics and opinions influenced by their temperament, background, theological leaning and personal history. Some scholars believe that the whole Bible is made up of such texts that need similar “weighing” and cannot be taken literally without it.

Derek Suderman, professor of Old Testament at Conrad Grebel University College, Waterloo, Ont., noted at a Bible study seminar in January, that both Jonah and Nahum are prophetic books about Israel’s enemies, the Assyrians, with their capital at Nineveh. But in Jonah, the Ninevites come off better than the Jews, while in the other they will be destroyed because of their sexual immorality and their practice of enslaving others (Nahum 3:4)

Paul’s guidance to the church in Rome would seem like no answer to us who are used to living our lives as individual Christians with little regard for our sisters and brothers in Christ. Most of what we do and believe is done in private, away from the view of others. As Mennonites, in particular, we have divided and re-di-vided over a myriad of issues, choosing to break fellowship over things we thought important.

But both the results of the Jerusalem Council and Paul’s teaching in Romans were to the effect that fellowship was more important than personal likes or dislikes, or personal beliefs. The Christians of the first century were to choose self-denial of Christian freedom for the sake of the deeply felt beliefs of fellow Christians, for the sake of unity and fellowship.

Using a biblical model of discernment, then, will not necessarily lead us to agreement on deeply held issues. It may, in fact, lead us to keep our individual positions because of different histories, experiences, traditions and methods of understanding the Bible. But Paul believed that unity in the body was of highest importance. When faithful Christians come to different conclusions on significant issues, the promotion of unity while holding divergent views, and a willingness to continue discussing and challenging each other, are the actions we are encouraged to take. It would seem that, for Paul and the early church, being in continuing fellowship with each other was the key requirement in any discernment process.