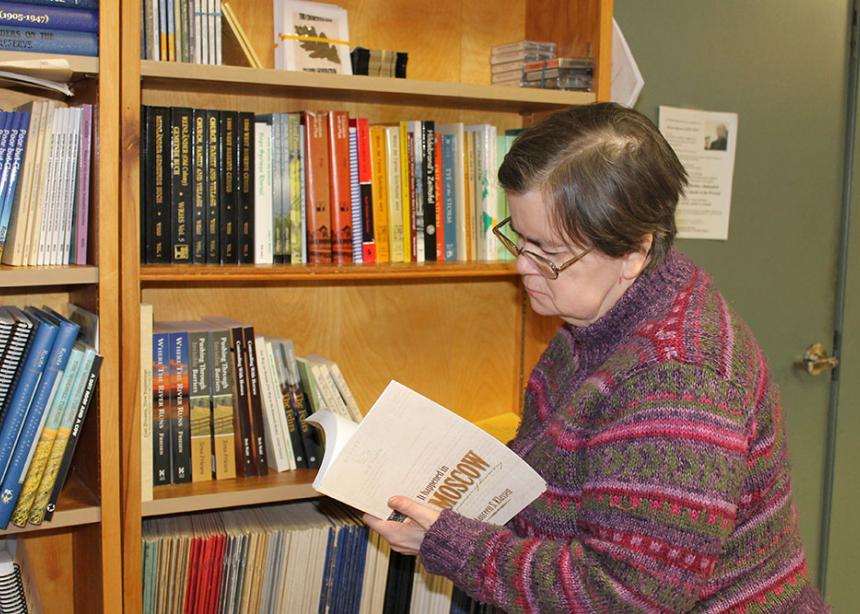 “Please do not take photographs.”

With these words, Jake Buhler, chair of the Mennonite Historical Society of Saskatchewan, introduced the evening’s guests, an a cappella choir from the Church of God in Christ, Mennonite, sometimes known as the Holdeman Mennonite Church.

The gathering was the sixth in the “Getting to know our families” series sponsored by the historical society and featuring different Mennonite groups. The event was held at Saskatoon’s Bethany Manor on Feb. 28.

Along with the choir, speaker Bob Goodnough shared the denomination’s history and beliefs. John Holdeman founded the Church of God in Christ, Mennonite in the mid-1800s as a response to perceived apostasy in the Mennonite church. He attracted a following among Swiss and Russian Mennonites, German Lutherans and some English-speaking people. Today, the denomination has about 25,000 members worldwide; 5,188 of those members form 56 congregations in Canada. Most churches have their own schools.

Prior to celebrating communion, about once a year, Goodnough said that each church holds revival meetings, giving opportunity for repentance and restitution. Church discipline—including excommunication—is practised, but is meant to be restorative.

Simplicity is stressed. Women wear black prayer coverings and men grow beards. According to Goodnough, the church has no fixed leadership structure; Christ is head of the church and each congregation is self-governing.

Thiessen led a virtual tour of the Global Anabaptist Mennonite Encyclopedia Online (GAMEO). What began as the Canadian Mennonite Encyclopedia 17 years ago has grown to include information on Mennonites worldwide. GAMEO’s goal, said Thiessen, is “to tell God’s story through the lives of Mennonites around the world.” The website currently has 15,460 articles in English, with the hope of eventually adding other languages.

Thiessen’s second presentation addressed the importance of archives in bringing history to life. Neither library nor museum, an archive houses primary source documents, such as diaries and church registers, and significant secondary source documents, including books, journals and magazines. In building an archive, Thiessen said historical societies need clearly stated development policies that meet the needs of their patrons.

In discussing Thiessen’s presentation, Buhler offered a compelling reason for maintaining archives. GAMEO may take a phrase such as “sending missionaries to the pagans” and edit it to be less offensive to twenty-first century sensibilities. In doing so, said Buhler “we lose the record of how we once thought about the world around us.” Because they house primary source documents, archives preserve the attitudes and worldview of their writers, for better or for worse.

Preserving history, Thiessen reiterated, is about telling God’s story. “If we believe God is in us, that we’re doing the will of God, then we’re living out God’s story.”

To learn more about the Mennonite Historical Society of Saskatchewan and its upcoming events, visit http://mhss.sk.ca/.