Sexual inclusivity motion to be presented at national assembly

May 25, 2011 | God at work in the Church
By Rachel Bergen | National Correspondent
Winnipeg, Man. 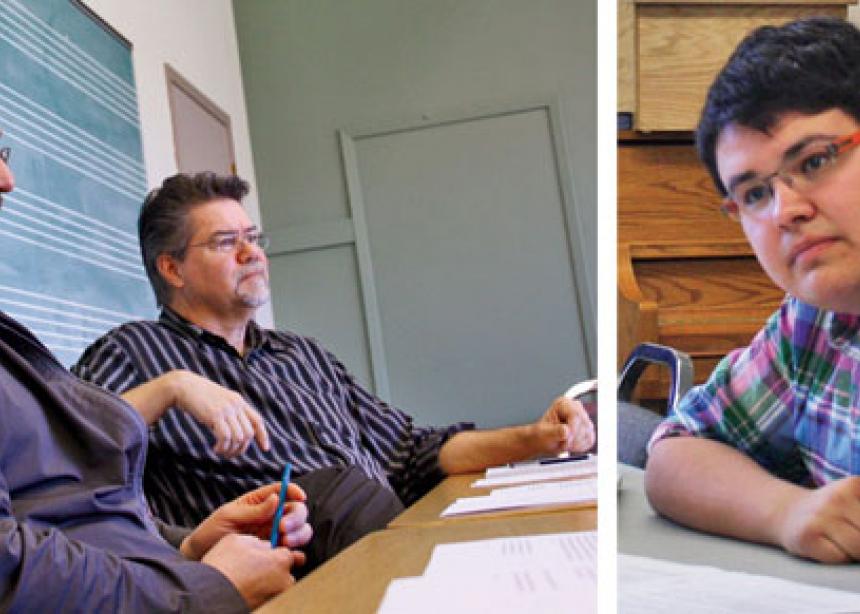 On May 14, MC Canada general secretary Willard Metzger and chief operating officer Vic Thiessen, and Ken Warkentin, executive director of MC Manitoba, met with members of Harmony: Mennonites for LGBT (Lesbian, Gay, Bisexual, Transgendered) Inclusion. The grassroots initiative within MC Canada desires to create open and loving spaces for people of all sexual orientations and gender identities in congregations and area church bodies. The purpose of the meeting was to discuss a motion Harmony plans to present at the MC Canada assembly in Waterloo, Ont., in early July.

This motion will ask MC Canada to acknowledge that:

The motion also calls on MC Canada to:

The timing of this motion is especially important to Harmony, since it was 25 years ago that a motion on sexuality—known as the Saskatoon Resolution—was presented and adopted at a national  assembly.

That resolution reads in part: “We understand the Bible to teach that sexual intercourse is reserved for a man and a woman united in marriage, and that violation of this teaching is a sin. It is our understanding that this teaching also precludes premarital, extramarital and homosexual sexual activity.”

“In the past, the Saskatoon Resolution has been used as a tool to make non-heterosexual people feel excluded,” said Ben Borne, a coordinator of Harmony and the incoming student council president at Canadian Mennonite University, Winnipeg. “It is certainly outdated, because of the language and the wording used.” He said the Harmony motion is meant to do what the Saskatoon Resolution could not: include non-heterosexuals in the church.

“This is a resolution to call on congregations to embrace their [non-heterosexual] brothers and sisters,” said Erwin Warkentin, a member of both Harmony and Bethel Mennonite Church, Winnipeg.

For Borne, being able to meet with senior Mennonite church representatives symbolizes the relationship Harmony hopes to build with the national church. “It shows that Mennonite Church Canada is interested in what their own members are doing,” he said.

According to Metzger, putting forward this motion that would hold the church accountable for “loving dialogue, is a message we always need to hear.”

Looking ahead, Metzger is prepared for difficult discussions regarding sexuality at the conference. (See his From Our Leaders column, “Others are watching closely,”)

“The General Board is committed to walk towards difficult conversations, confident that when God’s people gather, the Spirit of God is in the midst,” he said.

The Harmony motion is scheduled to go through the Resolutions Committee on July 7 at the assembly. It will be given a 20- minute time slot.

“That’s more time than any other resolution,” Thiessen noted.

When peole, such as LGBT and their families hurt, the church is obligated in obedience to Christ call to be in loving dialoge with them. and make room for the Spirit to bring them together.

It was really good to read this article about the important work that is being done by Harmony and the stated openness from MC Canada/Manitoba leaders to discussing matters of sexuality. I hope this article is also an indication that The Canadian Mennonite is willing to start allowing its constituency of readers the space for talking about sexuality from a variety of perspectives.

The Holy Bible states clearly that "homosexuality" is a SIN. Read Leviticus 18:1-23 and check verse 22 in particular and in between what verses it is positioned. And read also Romans 1, the whole chapter. You will see that there is no room for doubt in God's opinion about this sinful, detestable and disgusting practice.
They who sin need to consider their ways, and repent.
What is "Harmony" going to want next?
It's clear that Sexuality is the only thing in the center of "Harmony's" lives and not God.
Is there any man or a woman in who's life God is the center and who lives by faith and not according the desires of the flesh who can say that homosexuality etc. is not a sin? The Bible warns against such people.

I like what Willard Metzger said: "The General Board is committed to walk towards difficult conversations, confident that when God’s people gather, the Spirit of God is in the midst.”

When the people of God is illuminated by the Spirit of God, through the Word of God, then we are able to deal with these difficult conversations in our BodyLife as Mennonite Church Canada in love, joy, and peace.

I find it unfortunate that the LGBT community has reckoned only their orientation in this matter of sexuality.

Likely, the greater concern these days in the context of any faith community is sexual purity. Rather than polarizing on issues of orientation and inclusivity or excusivity, we should be championing the cause of obedience to the biblical admonition upholding an abstinent standard, regardless of orientation. Particulary since the text is otherwise clear as to what constitutes a marriage.

It's good to read from these comments that there are still people out there that consider SIN what the Bible calls SIN. Too bad that groups in our conference, leaders and pastors, do not have the courage to do so anymore. I wonder of what they are afraid of? That people will leave the church??? Wanting to be “politically correct”? Not “offend” anyone??? Come on.. we are to be “crazy for Christ” and continue to teach and preach things that offend this world. I tell you... people will leave the church yes… but only if the Gospel of our Lord and Savior Jesus Christ is "watered down", otherwise they will not leave. Trust me, people are tired to follow the pattern of this sick and empty worldly culture... specially teenagers and youth. They are seeking for something that makes sense. Brothers, let’s not be afraid to tell the truth…and offend people with the Biblical teaching, let’s not be afraid to be tough. It is the only way to bring real growth to our churches, and, as a bonus, even recover the financial stability in the entire Canadian Mennonite Conference.

The Lord Jesus Christ accepted the worst of sinners. They did not have to change before he would accept them, but the ones that truly accepted Him did change. “When Jesus had lifted up himself, and saw none but the woman, he said unto her, 'Woman, where are those thine accusers? hath no man condemned thee?' She said, 'No man, Lord.' And Jesus said unto her, 'Neither do I condemn thee: go, and sin no more.'" John 8:10, 11
Throughout scripture the theme is the same, people changed if the decided to acknowledge Jesus Christ as Lord. You can see the change in the verses I quoted.
It burdens me to see Mennonites holding on to Mennonite more than they do to whom they say they follow (The Lord Jesus). I was born into a Mennonite family did a lot of service in the “Mennonite church” as it would be called. It was not until my wife and I felt so empty of all this service and left the “church” that I was saved. I can now truly say that Jesus Christ is my Lord and Saviour. The Lord part was never spoken about, only after we left that I actually started to read the scripture to see for myself what I should do after I was saved. That’s when I understood that Jesus Christ is not only my Savior but He is my Lord and Saviour! I will forever be grateful for God leading us out of “church” and into His church.