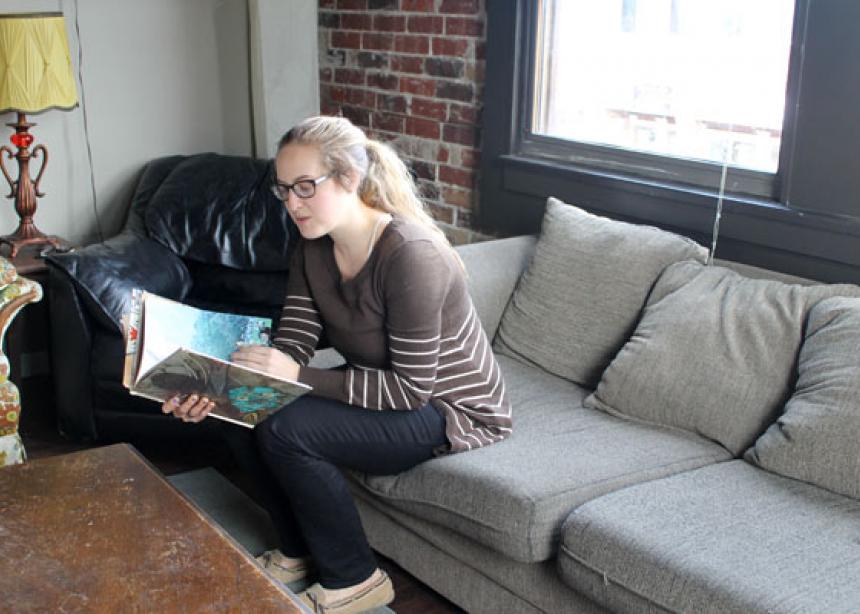 By turning a former flophouse into a cozy community living space, young adults in Abbotsford have found a way to recycle and build community at the same time.

The Atangard Community Project, housed in one of downtown Abbotsford’s oldest buildings—originally the Atangard Hotel dating back to 1927—is now a residence for up to 25 young adults. They live in 18 single and double occupancy rooms on the second floor of the former Fraser Valley Inn, which not long ago had a reputation for housing derelicts. The residents, either students or young professionals, range in age from 19 to mid-30s and are learning what it means to share and invite others into their lives.

Co-founder and resident director Sophia Suderman says the project came about because several people recognized a need for such a community. The former old brick hotel building became available, but was in such poor condition it was considered virtually unusable. However, a group of visionary founding members invested in the project, first getting rezoning permission and then totally fixing up the inside, ripping out the carpets, redoing the plumbing and renovating the rooms. The whole project took two years; the first residents moved in Sept. 2009.

Although being Christian is not a requirement to live in Atangard, many of the residents are Christian and some are from Mennonite churches. It is set up much like an intentional community or voluntary service unit with individual rooms and shared bathrooms and laundry facilities. The large kitchen/dining room allows for cooking on one one’s own or for meals eaten together, with each person taking turns preparing meals for the whole group once or twice a month. The group also has regular house meetings.

The fee for living at Atangard is affordable, with monthly rent ranging from $375-$500, depending on unit size. The group has strict standards: it is smoke free and drug use is forbidden. Many residents ride bicycles, or pool rides in vehicles. They share laundry facilities and operate a garden. Discussions and creative endeavours such as music are abundant.

Resident Chad Doerksen says he appreciates the chance to live in what amounts to an extended family, helping and supporting each other with various personal and emotional needs. “As in any intentional community, respect for others sharing the same living quarters is vital. You learn about personal space and the advantages and disadvantages of living with other people,” he says, adding that “conflict is minimal.”

Suderman says she is privileged to work with a “really wonderful group of people” at Atangard. “It has been one of the hardest things in my life, but one of the most valuable, and always challenging.”

For more information on Atangard Community Project, including how to apply as a housemate, contact Atangard at 604-850-1545 or email atangard@gmail.com.