Quilt to make space for dialogue on sexuality

‘How do we build a hopeful future in which people of all sexual identities can share life together in the Mennonite community?’ 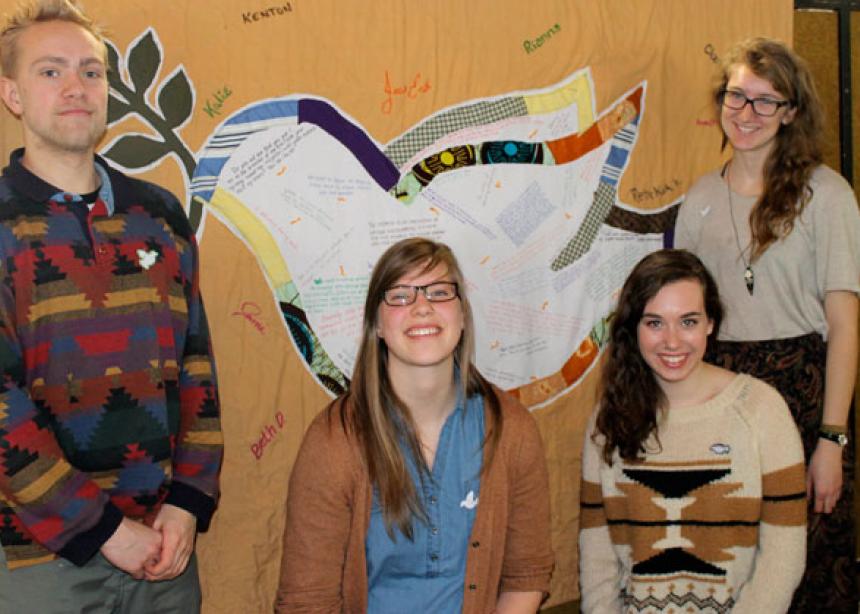 Jonah Langelotz and three of his classmates needed to participate in a nonviolent action for their History and Strategies of Nonviolence course at Canadian Mennonite University (CMU). It did not take them long to decide on an issue.

“We are aware of the dialogue around inclusion of all sexual identities in our community that is happening in many of the churches,” said Langelotz, who hopes their project will help to move that dialogue along. “People continue to be excluded from the Mennonite church, as diverse and as welcoming as we are.”

On the afternoon of March 27, 2013, they staged their event in the student centre on CMU’s south campus. They hung a large reclaimed quilt that was the product of their labours over the last several weeks.

A large white dove in the centre dominates the quilt. They gathered between 30 and 40 responses to the question, “How do we build a hopeful future in which people of all sexual identities can share life together in the Mennonite community?” Those responses are inscribed on the dove.

“We gathered these responses from people who are part of the LGBT [lesbian, gay, bisexual, transgendered] community at CMU, or who have some personal connections with the issue,” explained Clare Schellenberg, one of the students.

A colourful border on the quilt “speaks of the diversity within God’s church, the many gifts that comprise its body, along with the voices of those who have sometimes been shunned to its margins,” explains the written description that accompanies the quilt.

“Being part of a group that was to address the issue of sexuality in the church was somewhat daunting,” said Langelotz. “It is clearly a ‘hot-button’ issue that has been a topic of dialogue in the [area church] and many congregations.”

“The quilt idea came to us when we were trying to think of a symbol that would reflect Mennonite culture, history and faith,” said Langelotz. “The art of quilting and the symbol of the dove we hope will prompt a space for storytelling around the issue of inclusion of all sexual identities in our community.”

The reclaimed quilt was one that Langelotz’s grandmother had made many years ago.

“Choosing the symbol and the way we went about our action was done so that we created a particular space, one that was intended to be open and welcoming, like the kind of church we are advocating for,” he said.

“Many people are affected by this issue and the church is slowly beginning to talk about this,” said Schellenberg. “We believe we first need to get to know each other, to tell stories, to build relationships, so that the church will be strengthened, not weakened.”

She pointed out one of the inscribed responses that quoted Tzu Yeh (AD 316): “Do you not see that you and I are as the branches of one tree? With your rejoicing comes my laughter, with your sadness starts my tears.”

“So much goes unspoken,” said Schellenberg. “Hopefully this will create a place where dialogue can happen and where people can share their stories.” As she spoke, a stream of students passed through the student centre and many stopped to study the quilt, pick up a pen and add their name, their story or a reflection. A space for dialogue had been created. 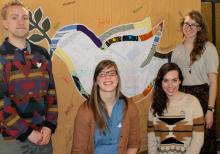 Thanks for this article. Beautiful to hear the upcoming generation of Mennonites are bringing inclusion to the forefront, rather than leaving the church.