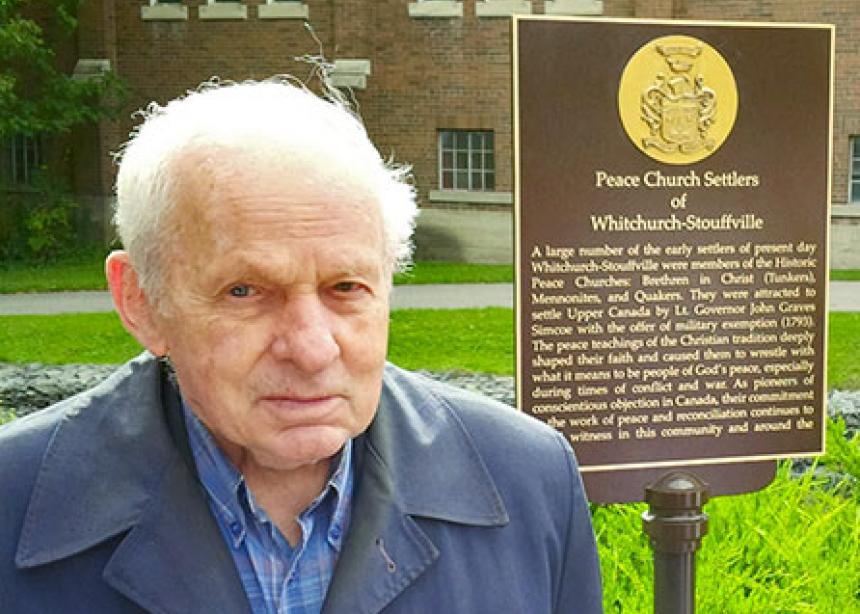 John Reesor, a resident of Stouffville, seen here with the peace plaque, was a conscientious objector during the Second World War.

When the white doves flew up from the newly installed peace plaque in the centre of Stouffville, Ont., Arnold Neufeldt-Fast’s heart must have stopped.

In less than two years, there was the almost unheard-of public celebration of peace, not war, as was the case when he and his colleagues representing the Mennonite, Brethren in Christ and Quaker communions (Historic Peace Churches) tried their best to convince town officials that any celebration of the War of 1812 had to include an acknowledgement that Stouffville, named after a war resister with 55 like-minded families in tow, was founded by people who refused to take up arms.

In the frenzy of last year’s nationalistic push to celebrate the 200th anniversary of the War of 1812, town officials, led by their federal Member of Parliament, voted against any official recognition of the peaceful settlers—despite several appeals and a divided vote on the town council—to include a “peace” segment in the town’s militaristic parade and fly-over.

But the dynamics of this conflict seemed to fade when a special day was set aside on Sept. 22, as a peace festival, the likes of which Gerry Caplan, a local historian, author, teacher and political activist, labelled as “so novel, so outrageously unusual, that you had to shake your head and say, ‘You know, I don’t remember when the last one was.’ ”

And to bring the point of peace home with unambiguous clarity, Caplan was joined on a panel by Dr. Izzeldin Abuelaish, the well-known Gaza physician, who, instead of seeking revenge in the tragic loss of his three daughters in an Israeli shelling of his home in 2009, wrote a best-selling book entitled I Shall Not Hate.

Instead of revelling in triumph, Neufeldt-Fast, a professor of theology at Tyndale University College and Seminary, Toronto, and a local ordained minister, said simply: “This plaque is a commentary on the peace dove at the top of our town crest. The dove is a tribute to the peace story that shaped the character, the actions and the contribution of our first settlers.

“A foundational category for Mennonite and Brethren in Christ ethics is the simple biblical command, ‘Do not resist an evil person. If someone strikes you on the right cheek, [boldly] turn to him the other also’ (Matthew 5:39). For Mennonites, this was not considered a saintly or heroic stance, but simply a description of the life of a people that gathered by and around the Jesus story. ‘Do not repay evil for evil, but . . .
live peaceably with all’ (Romans 12:17,18). To abandon this teaching would be to abandon the one who teaches it. We can’t understand who these first settlers were without understanding this teaching.

“But this teaching was hardly theoretical for those first settlers.

“Abraham Stouffer’s grandfather, with his parents and siblings, were very likely amongst those Swiss Mennonites who had their property confiscated and were expelled from Switzerland in 1710. The Canton of Bern—from which the Stouffers and Reesors and many settler families hail—was threatened in those years by the aggressive expansionist campaigns of Louis XIV, King of France. The predominant reason given by the Bernese authorities for the expulsion of Anabaptist/Mennonites in 1710 and 1711 was their outright refusal to bear arms and serve in the military.”

To bring peace into the modern setting, Neufeldt-Fast noted three solutions presented by a peace panel during the festival: education, interaction and imagination.

“Ignorance is our enemy,” said Abuelaish. “No one is born hating another person because of the colour of his skin or his background or his religion.”

Brief stories from persons with different perspectives provided the interaction, Neufeldt-Fast said, proving that “the more human beings interact and the more we get to know one another, the more likely we will be able to understand another person’s perspective and find peace with them.

“Around the third theme, imagination, it became clear this is a secret ‘weapon’ for peace,” he said. “Often the path of peace is harder to imagine and therefore harder to enact than the path of violence.” 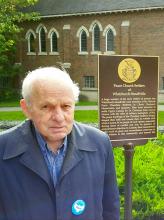 John Reesor, a resident of Stouffville, seen here with the peace plaque, was a conscientious objector during the Second World War.

Thanks Dick Benner for your personal interest in, and the coverage of, the peace events in Stouffville over the last year and a half.
One small correction in the article above; the three take-away summary points (education, interaction, and imagination) were themes identified by the moderator, Dr. Jane Philpott, a member of Community Mennonite Church Stouffville.