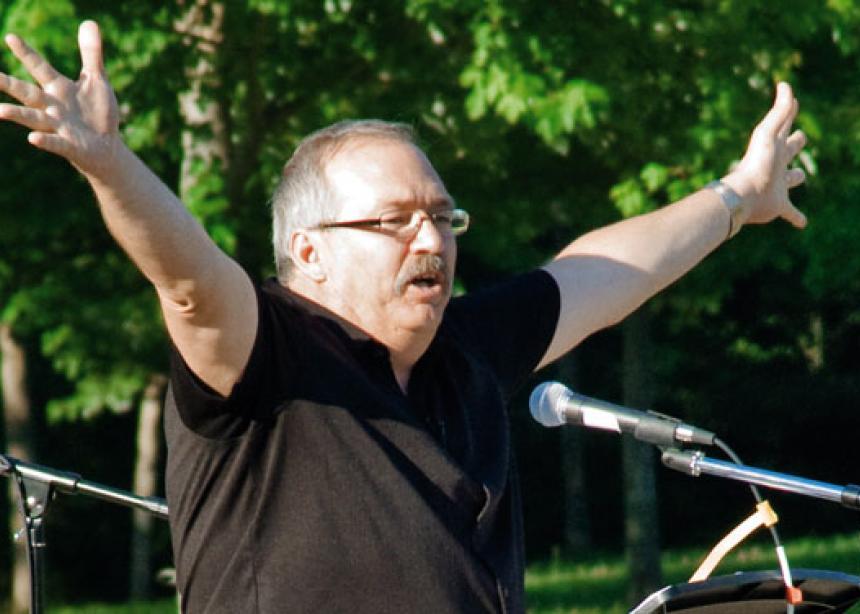 Metzger went on to describe the difficulties of being a leader in that church. Quoting Jack Suderman from the Mennonite Church Alberta minutes “that Canada is a tough place for the church” and that “leadership in the church is not for the faint of heart,” he noted that he perhaps should have read those minutes before consenting to be the general secretary.

Painting the picture of what the church is facing today, Metzger turned to the text from Revelation 21. The church of the first century was also having a difficult time. Emperor worship rose up as thankful people showed their gratitude to the peace and prosperity under the heavy hand of Rome. Not worshipping the emperor could raise questions about how patriotic someone was and whether they were in revolt against Rome. Christians, counter-cultural persons, were under tremendous pressure. Metzger wondered out loud if John the Revelator despaired, away from his community, worried about how things were going there. Did John remember Jesus’ cry from the cross and contextualize it: “My God, my God, why have you forsaken us?”

But, in spite of difficulty, and challenge, Metzger told the congregation, “This is not the end!”

“The book of Revelation is not an easy message.  John was not telling the church to relax and that everything would be fine.”  In fact, Metzger continued, were there some who expected the church to be obliterated?  “Would faith drown in the blood of the martyrs?” He wondered out loud if some in our “post modern, post Christendom context . . .  entertain the same thoughts”?  But this is not the end.     God is not finished.  Putting his faith in God at work in our youth he said, “The youth will be the church who will speak the unthinkable and risk doing the unimaginable.”  God, through the Spirit is filling us with courage and hope for the task ahead.

This is not the end, and the end belongs to God. “It is God who will determine the end.”  Revelation makes it clear that no matter what happens in the world, God is in charge. “For now we struggle, swimming against the current, defying the calls to abandon hope. Sometimes it feels like hate cannot be defeated. Sometimes it feels like the frenzy of war will never be thwarted. Sometimes it feels like the cry for justice will never be given its hearing.”  “But,” Metzger reminded the congregation, “This is not the end.”  God has a future with a new heaven and a new earth where God will wipe away every tear and, paraphrasing Revelation 21, there will be no more death, mourning, crying or pain. “When that day comes, the old order of things, marred by hatred, strife, injustice, and greed – will pass away.”

Metzger called on the church to keep up the struggle, “defy the calls to abandon hope. . . receive the filling of God’s Spirit bringing hope, courage, boldness, and confidence.”

He concluded, “Faith will always have its children. Youth will always lay claim to conviction and commitment. The passion of God to restore and make things right in the world will always rise up within the hearts of God’s people.  We are the church.”