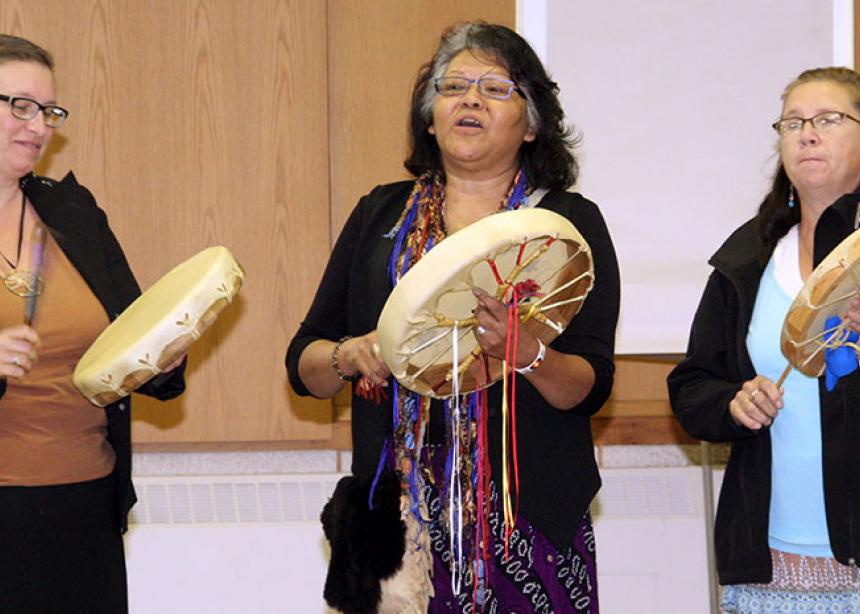 The “sacred hoop” is the circle of nations. While it originally referred to indigenous nations in North America, the hoop has been broadened to include settler nations with whom the indigenous people groups now share the land.

One of the most powerful moments of the weekend came as Merle Nisly shared both his story and his apologies. Nisly described himself as a “naïve young” worker at Poplar Hill Development School in northwestern Ontario, and later an administrator in both the Northern Light Gospel Mission, which ran the school, and in Living Hope Ministries, its successor organization in Red Lake, Ont.

He said his naivety included a complete lack of knowledge of how the school fit into the Canadian government’s policy of assimilation. Indigenous children were to become productive members of Canadian society, albeit as service workers, assimilated into the culture while leaving behind their age-old cultures, languages and spirituality. While Nisly said he personally learned to communicate in the local indigenous language and remembered no overt abuse, he still spoke as one deeply wounded by the knowledge of his participation.

As part of his presentation, he offered six apologies that Living Hope Ministries has offered, continues to offer and continues to sharpen:

When he finished to the applause of both indigenous and settler participants, Andrew Wesley, an Anglican priest and indigenous elder of the Nishnawbe Aski Nation from Toronto, himself a survivor and a descendant of survivors of the IRS system, spontaneously rose and went to the microphone. He said that, as an elder, sometimes one stands alone and does things about which others might be critical, but he wanted to offer Nisly forgiveness, shake his hand and hug him. He did all three, to another round of applause.

Attending the weekend were interested Mennonites from southern Ontario, indigenous survivors and leaders, and MCC Ontario board members and workers. They participated in sharing circles, passing both the microphone and the “talking stick”; and a blanket exercise to viscerally show what happened to the indigenous residents of North America as the settlers arrived. Time over meals allowed for more sharing and storytelling.

Ray and Anna Steinmann of Hillcrest Mennonite Church, New Hamburg, Ont., shared their story of teaching at Poplar Hill from 1964-65. They said they went to help and to serve God by educating the children, many of whom they have stayed in touch with over the years, celebrating their victories and grieving their losses. Years later, when they discovered that the explicit purpose of the schools was to take away the children’s culture, they said they were aghast.

Esther Wesley, coordinator of the Anglican Fund for Healing and Reconciliation, responded to them, “If you taught or worked in a residential school and did no wrong and did your best, be proud” of what you did.

This was the overwhelming message from both Wesleys and other indigenous participants. Many teachers and staff did their best for the children and meant no harm. Often they achieved those goals, even though there were others who went to harm and did evil. Nonetheless, all participated in the goals of assimilation, tearing children away from parents for 10 or more months a year, taking away their chances to learn to parent, and, in turn, setting the children up to have their own children taken away and adopted in the 1950s and ’60s.

In the closing circle, Lucie Iserhoff of the Timmins MCC Northern Ontario office, shared passionately as a Christian, noting that many who attended the residential schools run by churches of Jesus Christ now find themselves uninterested in Christianity or the gospel. Instead of looking down on them, she pleaded that they be given space to make their own decisions and to have time to process what happened to them. 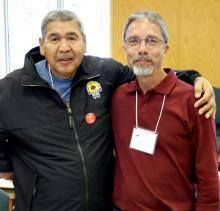 I would like to thank Dave Rogalsky for telling this story in a quiet way, demonstrating a great deal of respect. Thank you Dave for bringing to life the many moments that shine like stars, and seem to shine on!

Thanks Lyndsay. May the Hoop continue to be mended.
Dave