Leaders aim to include diverse groups 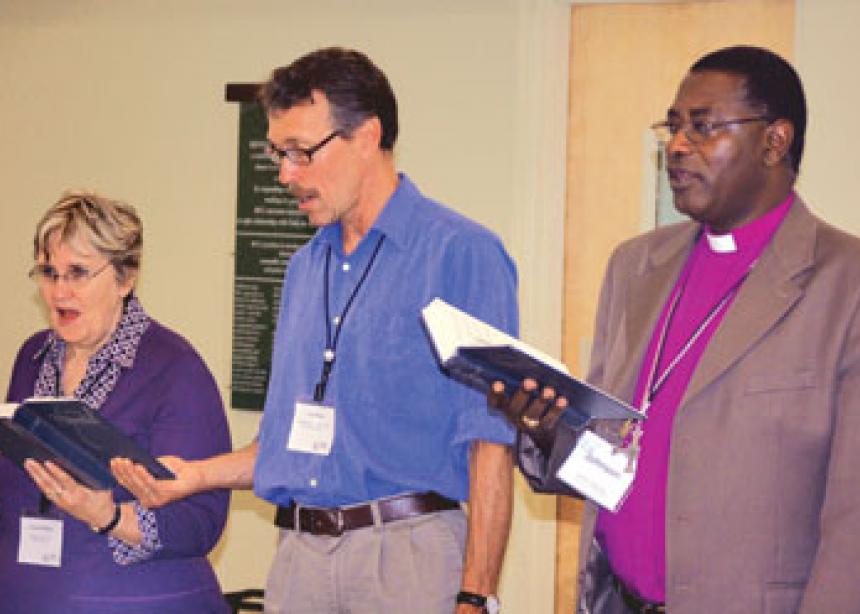 Mennonite Central Committee (MCC) is changing how it does its work, but not the work itself.

That’s how Arli Klassen, MCC Binational executive director, described MCC’s process of streamlining and shifting areas of responsibility among its member organizations. Klassen shared the current models for those changes—which she said are set in “gelatine”—at the June 11-12 meeting of MCC’s binational delegate body. “If there’s enough heat, they can melt, and we can re-form them,” she said.

Beginning in January, a joint board team—with representatives from the MCC U.S., Canada and binational boards—has been providing overall leadership to design and transition teams that are proposing changes for the New Wineskins process. They are basing their ideas on MCC’s New Wine consultations, which involved more than 2,000 people from 50 countries and finished in June 2009.

One of the ideas is to shift much of the binational organization’s work to MCC U.S. and MCC Canada. MCC would create a council to coordinate strategic planning, and decide which proportion of funds different continents and programs would receive. It would receive authority from its member agencies.

The joint board team is proposing that MCC Canada and MCC U.S. operate the international program together.

The teams are receiving feedback and will seek full approval in 2011 from all of the boards for proposed changes. MCC expects most major changes to happen in 2012.

The meaning of global

Proposals suggest the council’s board be composed of three people each from MCC Canada, MCC U.S. and Mennonite World Conference (MWC), as well as two members-at-large.

In the midst of these changes, MCC is looking at what it means to be global beyond the fact that it works in 60 countries. MCC is one of 30 service agencies participating in the Global Anabaptist Service Consultation from Aug. 6-9 in Addis Ababa, Ethiopia. The event will explore the level of interest in developing a global service forum, network or other entity of MWC member churches and related groups.

Larry Miller, MWC general secretary, identified some of the questions the consultation may address. “Should other Mennonite churches around the world join MCC?” Miller asked. “Or should MCC in North America and the other churches do something new together?”

Pakisa Tshimika, MWC global church advocate, who is coordinating the consultation, said that no single entity is asking others to join it, but that the consultation will be a chance for MCC to have more global input into how it is governed.

Lloyd Miller of Goshen, Ind., a delegate body member, hopes the new MCC system would be welcoming to MCC organizations outside of North America that might wish to join. “We will fulfill our mandate when MCCs around the world are equally involved in decision- making,” he said.

Anabaptists from around the world have been increasingly participating in funding MCC’s work: MCC had a considerable increase in the past year in donations from countries outside Canada and the United States without fundraising for that money. For example, a total of $1,300 for work in Haiti came from 14 Brethren in Christ congregations in Zimbabwe.

Worldwide donations for MCC’s response to the Jan. 12 earthquake in Haiti have reached nearly $14 million, making it MCC’s largest response in one nation.

A link to denominations

In planning for change, MCC is also looking at its connection to denominations in North America.

Mennonite Church U.S.A. has stated that it wants to be able to appoint members directly to the council board.

There are two issues with the idea of denominations appointing representatives to the board directly, Klassen said:

• First, the new MCC system needs to have accountability among the boards, which is why transition planners are suggesting that the MCC Canada and MCC U.S. boards would each appoint three members.

• Second, those six seats don’t accommodate the 14 Mennonite and Brethren in Christ denominations currently on the U.S., Canada and binational boards, let alone the higher number of denominations that participate at some level in MCC’s regional and provincial work.

“We are serving in the name of Christ as an arm of the church,” Klassen said. “We want to continue to remain connected to as many of the diverse Mennonite groups as we can.”

Theological diversity among those denominations has raised concerns for some. As the MCC delegate body met on June 12, members of Sommerfeld Mennonite Church of Manitoba were holding an informational meeting about their participation in MCC. Members of the group have expressed concerns to MCC in recent months about theological issues.

“They relate specifically to MCC’s interfaith bridgebuilding and the perceived implications of that,” said Don Peters, MCC Canada executive director. “The question, ‘Is Jesus the only way?’ is one they would express.”

MCC’s theology is the theology of the churches participating in it, Peters said. MCC adopted MWC’s “Shared Convictions” as its faith statement. “It doesn’t answer the question, ‘Is Jesus the only way?’?” Peters said. “What it does say is, Jesus is Lord. Jesus is Saviour. Jesus is reconciler. And we, as Christians, are agents of the reconciler and agents of reconciliation as we witness to Jesus.”