Letters to my sister 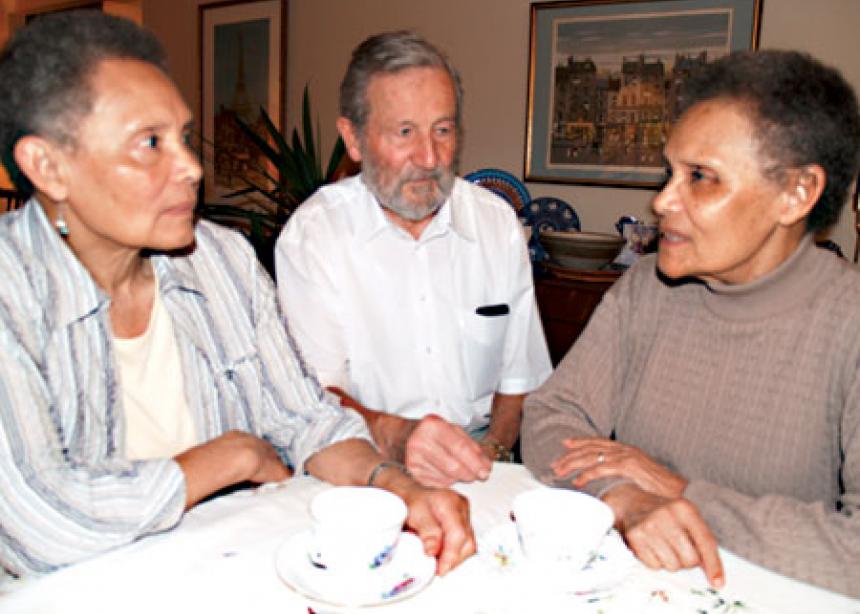 With this issue, we begin a three-part series of back-and-forth letters between two elderly twin sisters, Faith Elaine Linton and Joyce Gladwell, on the topic of homosexuality. Elaine, who is preparing to give a seminar on the subject, begins, to which Joyce responds. Joyce and Elaine were born in 1931 in Jamaica. They were educated at St. Hilda’s, an Anglican boarding school for girls. Both studied at the University College, London, England. Joyce and her husband Graham emigrated to Canada in 1969. They are members of Waterloo North Mennonite Church, Waterloo, Ont., and are the parents of Malcolm Gladwell, the best-selling author of such books as Blink and Tipping Point. Elaine, married to Ivon Linton, returned to Runaway, Jamaica, to teach, and after retirement she had a full lay ministry. She was awarded an honorary doctorate from the Caribbean Graduate School of Theology in 2000. Both Joyce and Elaine have children and grandchildren. Joyce’s autobiographical Brown Face Big Master was published by InterVarsity Press in 1969 and republished by MacMillan in 2004. Elaine’s What the Preacher Forgot to Tell Me: Identity and Gospel in Jamaica was published by Castle Quay Books in 2009. (See Part 2 and Part 3 of this series.)

Brief introduction of Elaine’s argument
When we look at what God has to say about humankind as male and female, we gain a much clearer perspective on the issue of homosexuality. The resounding validation and affirmation of the male-female composition of humankind and of the image of God leaves no room for even the thought of a same-sex union, although that does not mean we neglect the issue or that we ignore those who see things differently from us.

Genesis 2:24-25 tell us, “Therefore a man leaves his father and his mother and cleaves to his wife and they become one flesh.” This statement emphasizes the primacy of the marriage relationship, which is the first relationship God created, and which is the most significant compared with every other human relationship.

It is a total union—physical, emotional, intellectual, moral and spiritual—for the Creator assigned the male-female union in order to manifest his image, his likeness in human form (a comprehensive image of God in humans). As such, it becomes the metaphor used in Scripture for the future consummation of the union between Christ Jesus and his bride, the church.

I believe, however, that our neglect of Genesis 1 and 2 is in large measure responsible for the fact that even within the universal church so many are open to the idea of homosexuality. We have not been sufficiently grounded in the truths so clearly established in these chapters.

Elaine, my dear twin:
We got the copy of your seminar talk—all 15 pages of it.

It’s a pity we live so far apart that we can’t get together for a good discussion.

It was amusing as I read your talk I could hear the language of Dr. Martyn Lloyd Jones’ sermons, and the Bible readings we listened to in the Inter-Varsity Christian Union. Here we are, almost 80, and we still resonate with the patterns of thinking and speaking that we picked up in our 20s.

I like what you have written. It is an excellent presentation, as I would expect, since you have been working on these ideas for years. However, I must beg you to make one sacrifice: Please leave out your section on homosexuality.

First of all, consider the violence against gays that happens in different parts of the world. Remember the murder of that young gay man we used to know. It would be very unwise to say anything that might feed into that toxic reaction.

Also, in your Christian circles, what you say matters. You cannot afford to appear to reinforce false attitudes and harmful behaviour towards gays. As Graham [Joyce’s husband] points out, it would be unwise to take sides at this point in time. Our understanding of homosexuality is a work in progress. It is still something of a mystery; the debate is unresolved. You don’t want to speak too soon out of insufficient understanding, and then later have to change your position. Wait for the light.

Our understanding of homosexuality is evolving, just as our thinking about the seven days of creation evolved with Darwin, just as our approach to slavery evolved with Wilberforce, just as the role of women in society and in the church has been changing over the last 40 years. Therefore, remove yourself from this debate in case you do more harm than good. If you are asked for your opinion, bow out, say that you don’t know enough about it.

Homosexuality is being studied by researchers in biology on the development of sex and gender in the fetus. No clear conclusions have been reached. The question is: What causes homosexual behaviour to arise in nature?

Some time ago this question was being asked: Is there a gene for homosexuality? That question seems to have been dropped, or perhaps it is still being pursued without clear results. The question then becomes: If it is not located in a gene, does it come about as a congenital condition, as a result of what happens to the fetus during pregnancy or in the birth process?

We do know that all human fetuses begin development in the womb as females, and the process of differentiation into males involves a number of small biochemical changes over time. This was explained to me by a friend working in biology. In her lab, they were following up the idea that homosexual preferences may arise when this sequence of changes is cut short, or disrupted, in some way.

You can see how the researchers are thinking. They start with the assumption that homosexual orientation is a given in some people’s lives, just as heterosexual attraction comes naturally to others. That’s where I start, too.

I came to understand that by listening to the stories of gay persons as I trained to be a marriage and family therapist, and later in counselling sessions with gays. People discover as they are growing up that they have this sexual preference. The people I talked with didn’t choose to be that way. If there are heterosexual people who wake up one morning and decide casually to try the homosexual lifestyle, I haven’t met or heard from them. I do know that the opposite happens, that some people who find they have a homosexual preference will conceal it and try to integrate as heterosexuals, to the point of marrying and raising a family. These marriages don’t always work, and can be painful for the partners.

For heterosexuals to choose the homosexual lifestyle without a compelling sexual attraction to their own gender, seems to me to be a strange choice to make, especially given the disadvantages and the suffering of gays in society.

Then, just to throw in another complicating factor, there is the question of whether sexual orientation is distributed across the population on a continuous line from homosexuality to heterosexuality, with people in between the endpoints who are open to both kinds of sexual activity. There you are. This is not a matter for simplistic pronouncements. Enough for now. Our grandchildren will be here any moment.

My dear Joyce:
Thank you for your frank but affirming letter. I must confess I did not find it easy to accept your suggestion that I omit the paragraph on homosexuality from my presentation. After a struggle, I found grace to recognize that you had valuable information and insights on a subject that is, as you point out, still something of a mystery, and much more complicated than many of us realize. Let’s talk some more.

See Part 2 and Part 3 of this series of letters. 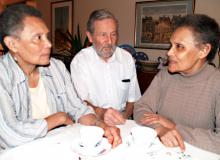 Dear Joyce, I am selling mum's house in edgware and came across your book. How lovely to read about you. There was a card inside that said we met again in Southampton. I wish I could remember.
I read about your twin sister on the first page. That was news that you had a twin. And to read some of your dialogue is a delight, especially as I have been in an important gay relationship.
It was wonderful to see a picture of the two of you and of Graham, who I also remember clearly.
I would love further communication if that is possible.
My fondest love,
Margie/Maggie

Joyce, I found you on the Internet after reading your Son's books. Needless to say I had to buy your book from Amazon which I enjoyed reading.
Please comfort yourself with the thought that it is not only people of darker skins who met with the awful discrimination meted out by the British in the 1960s we were all treated the same, white, black, brown, all colours of the rainbow it made no difference. But time marches on and the wounds heal and one does well because of it and inspite of it!
You will not remember me I am sure, but I also attended St.Hidas with my Twin Sister, and remember you teaching us for a short period of time.

My best wishes to you and your family, sincerely Christine Helwig Wirtz.