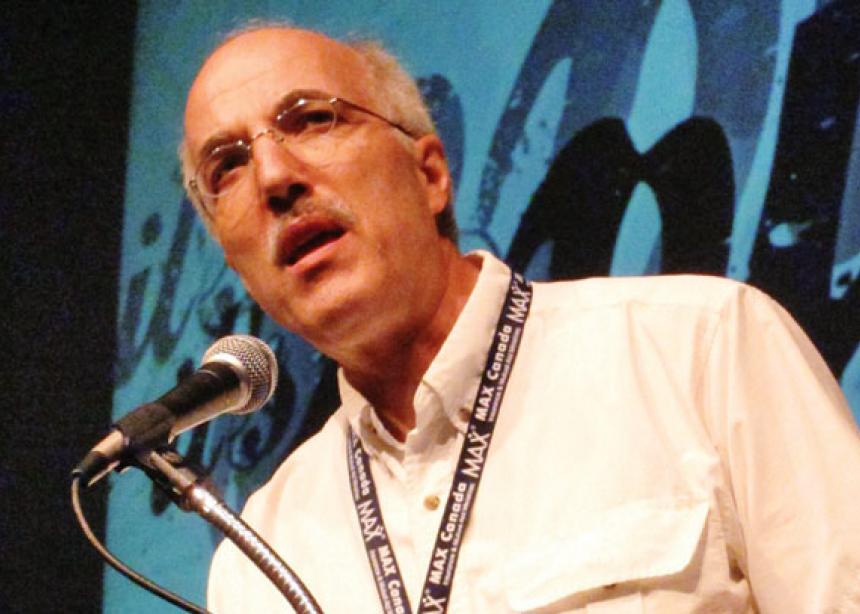 At the last worship service of Mennonite Church Canada Assembly on July 8, Nelson Kraybill reminded the congregation that some of the aboriginal people in southern Ontario moved here from the United States as politics became intolerable there. He then quipped that if Sarah Palin were to get elected another flood of people might be going north! Then he continued, speaking of the Wednesday afternoon tour which took him to Caledonia, site of a long-standing land claim by aboriginal people.

The Six Nations were promised land six miles on either side of the Grand River, “in perpetuity.” As they watched this being eroded year after year, and with development planned for land about which they were negotiating, their response overflowed into an occupation. When the police raided, many more aboriginal people streamed onto the land, surrounding the police and escorting them off the land, “mostly peacefully.” Kraybill noted a small Baptist church standing on the edge of the disputed land and asked the native folk how the congregation had reacted. The aboriginal people told stories of how the church people “learned to know us, served ice cream, worked to build a trust on both sides, and held weekly prayer vigils for peaceful resolutions.” Christian Peacemaker Teams was also remembered as a positive force.

Revelation 22:1-2 alludes to Ezekiel 47:12 where the prophet saw a vision of  God at work in the world: On the banks, on both sides of the river, there will grow all kinds of trees for food. Their leaves will not wither nor their fruit fail, but they will bear fresh fruit every month, because the water for them flows from the sanctuary. Their fruit will be for food, and their leaves for healing.

This healing, Kraybill emphasized, “Is not manufactured by the saints, this river of life, this flowing salvation, is a gift from God. God dwells with us, and God has a mission from us and the New Jerusalem to bring healing to the world.”

Referring to Prairie St. Mennonite in Elkhart, Indiana, where he is on the pastoral team, Kraybill told of a young man who took it upon himself to list the places where he saw God at work in Elkhart. He returned with a printed list, giving each sign 1-2 lines. “The document is 24 pages long!,” exclaimed Kraybill. “God’s at work,” said Kraybill, “even in Elkhart!”

“Mennonites are control freaks,” he said. “But missional theology turns that around—rather than saying ‘what can we do,’ we try to catch up with what God is already doing.” We need an “apocalypse,” an unveiling to see where God is at work, to see “where the river is flowing.” Without mission, he said, we are like the “peanut-free peanut butter” available in the university cafeteria! Without mission, the church is not the church.

Kraybill spoke about the Voluntary Service workers connected with Prairie St. Mennonite, who host a Wednesday evening potluck with the community including street people, the unemployed, as well as church people. At a recent dinner Kraybill sat with a young man with learning disabilities on one side and hungry children on the other side, and he felt hopeful because they were doing something in response to a bullet hole that recently appeared in the church’s front door.

Referring to Alan and Eleanor Kreider’s recent book, Worship and Mission in Post-Christendom, he called for the renewal of testimony in the church, of telling the stories of the mighty acts of God. People need to see what God is doing. Kraybill has stopped worrying about how many people show up on Sunday morning.

He told the story of the Living Water congregation in Chicago which has the tag line “meet at the corner.” Years ago a young man was shot on the corner and Christians began to meet there to pray. When a commercial property came up for sale on that corner it was purchased and a church formed—“a physical outpost of the reign of God.”

“Stop reducing the message to mere peace and service . . . Anabaptism should point us to Jesus, not just to ethics. Salvation belongs to God,” said Kraybill.

Concluding he said, “After almost incessant worship, in this last book of the Bible, Revelation ends with an invitation to the river . . . one we can pass on, extend to the world. The spirit and bride say come, let everyone who wishes take the water of life. Amen.”