Four generations farm together to feed the world 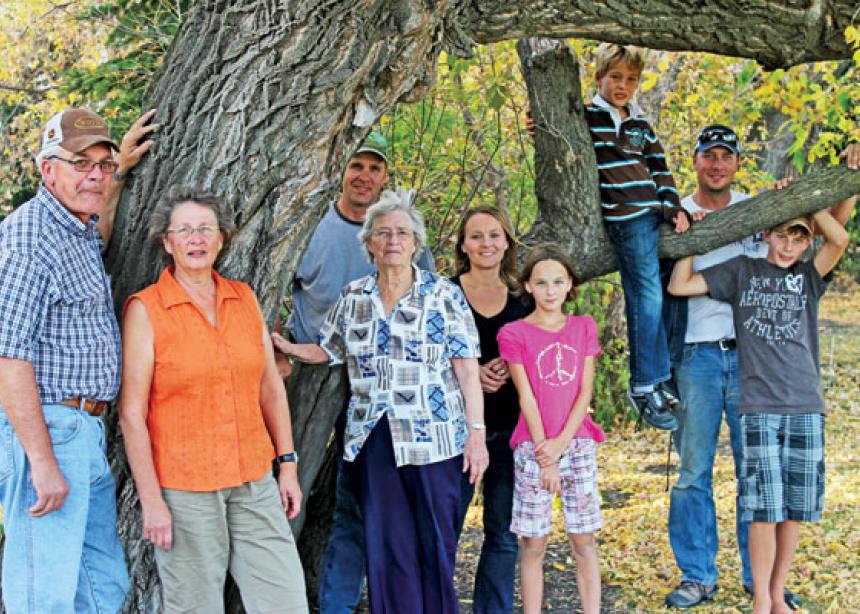 “I’m really thankful for the farm,” says Justin Krahn, 13, great-great-grandson of Peter W. Rempel. He and his two siblings spend their free time playing in the century-old cottonwoods and willow trees planted by their great-great-grandfather, whose advice—“Before you cut down one tree, you plant three”—is still practised today by his descendants.

In 1907, Rempel and his brother purchased 32 hectares of rich farmland along the Manitoba/Minnesota border near Gretna. This year, Jake Krahn (husband of Susan’s daughter Sharon), and their two sons, Kevin, 38, and Matthew, 32, harvested 1,011 hectares at the family’s Borderside Farm.

“Although there are probably a half-dozen family farms within a [160-kilometre] radius that are similar to this, our farm is quite unique,” says Sharon, noting that the farm is the primary support for four generations of families who all live in very close proximity. “Due to the farm being in the family for over 100 years, our acres are all close together.”

For each one, this vocation and partnership has been a conscious choice.

“Farming isn’t really a job as much as a way of life that really compares to no other,” says Kevin. “But there are times, too, that I’ve found it has its negative points. I live on the main farm, so you can never really leave your job.”

“Sometimes there is a need to get away from each other when you spend six days a week working with each other,” says Matthew, who joined the farm operation just this year after leaving his long-time job at the Friesens Corp. But he has no regrets about the change. “This has always been a dream of mine and now it has become a reality,” he says, adding, “My fiancé is very supportive of me doing this.” Although he lives only a 10-minute drive away, he looks forward to moving closer.

Kevin and Matthew’s older sister, Angela, lives with her family on property adjacent to the farm. Her children like to jump on the tractor or combine for a spin as it passes by.

The grandchildren wander down the lane to their grandparents’ place frequently, even if it is just to jump on the trampoline or to take advantage of their grandmother’s “open freezer policy,” that permits everyone to take anything they want, but they must never put back an empty container. There has never been a cent spent on babysitting services for any of the generations.

“It takes a joint effort to run a farm like this,” says Kevin.

“I think farming as a whole really strengthens your faith because you are so dependent on the weather and none of that is in your hands,” adds his father Jake.

Jake, Kevin and Matthew meet at the beginning and end of every work day. As shareholders, Sharon and Kevin’s wife Helen join them for the bigger decision-making meetings several times a year. Praying together and a daily devotional life keep them each anchored in the faith they share.

Although they don’t all attend the same church, “we are all of the belief that this is all the Lord’s and that we are to be good stewards of that which is entrusted to us,” says Susan, who is a member of Gretna Bergthaler Mennonite Church.

“We agree to disagree and we check out to see what is best,” says Jake. “Everyone’s ideas are valuable, and give and take is very important.”

In the mid-1980s Susan took a memorable trip with the Canadian Foodgrains Bank to India. The passion she brought home has been instilled in her family, whose members have been active for several years assisting with local growing projects.

“The reason why the farm is here is to feed the world,” says Jake.

Kevin, who lives with his family in the house his great-great-uncle built, treasures the history he has inherited. The walls of an old granary are etched with notations from his great-grandfather. “We look back quite regularly on this rich history,” he says with fondness.