First female Mennonite missionary went down with the Titanic

November 7, 2012 | God at work in Us | Number 22
By Evelyn Rempel Petkau | Manitoba Correspondent 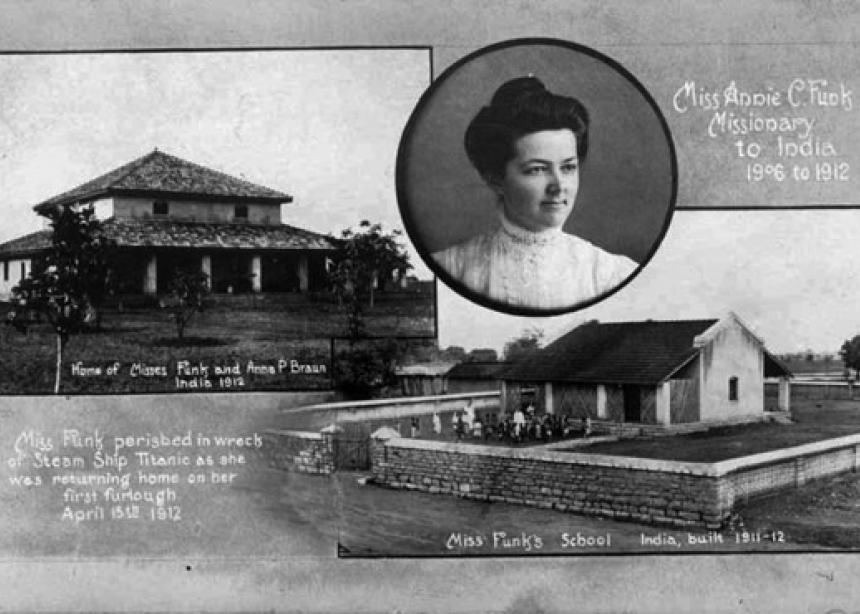 This year marks the 100th anniversary of the sinking of the Titanic. Throughout this commemorative year there has been much in-depth coverage of the Titanic but a little-known part of that story will hold particular interest to Mennonite readers.

Among the more than 1,500 people who died in the icy Atlantic waters during the dark night of April 15, 1912, was Annie C. Funk. She was the first female missionary of the General Conference Mennonite Church returning home to southeastern Pennsylvania on her first furlough from India where she had been sent in 1906. She had celebrated her 38th birthday on the ship just two days before the Titanic hit an iceberg.

Annie had received an urgent telegram message from her family stating that her mother was very ill and that Annie should return home. The message said her passage for the trip was paid for. She left her work in Janjgir, India, travelling by train and boat to England. She was to board the S.S. Haverford for the final leg of her journey back to America, but because of a coal strike the Haverford was delayed. She was guided to another ship, the Titanic, which would supposedly get her home “in record time.” Annie paid the extra she needed for a second-class ticket and on April 10, 1912, “the largest, fastest, most luxurious ship ever built” steamed out of the harbour with Annie on board.

Annie grew up in Hereford General Conference Mennonite Church near Bally, Pa., where her father was a deacon. In 1899 the Hereford Church decided to add a new auditorium in preparation for the General Conference sessions. At those sessions the delegates listened to the urgent needs in India that had been ravaged by famine in 1896. It was at these 1899 sessions that the delegates agreed to begin mission work in India and formed a commission to send immediate emergency relief. Annie, home from seminary and waiting for a call, must have been stirred by these stories of suffering.

Before she was called to India, Annie served in the African-American community in Chattanooga, Tennessee and with the Young Women’s Christian Association in Paterson, New Jersey. In 1906, she volunteered to go to India. “Annie testified to her trust in God’s care when she answered a friend who feared for her safety on her first transatlantic voyage: “Our heavenly Father is as near to us on sea as on land. My trust is in Him. I have no fear.”(MC USA Historical Committee Archives)

After a year and a half in India, Annie founded a village school for girls in a mud hut and began her work as a teacher. The school initially had 17 students. In 1910 the school was able to move to a much more substantial building and over the next half-century more than 3500 girls attended. The school was later named the Annie C. Funk Memorial School. Only the outer walls survive today, with a small plaque describing her brief but extraordinary life and her tragic death.

When the Titanic struck an iceberg in the North Atlantic and began to sink, Annie was woken by stewards, dressed and went out on the deck. There were not enough lifeboats to accommodate all of the passengers. “Annie, according to a confirmed report, unselfishly relinquished her place in a lifeboat to a mother with children. When Annie’s friends back in Pennsylvania heard of this incident they said, “It was just like Annie to so something like that.” (Global Anabaptist Mennonite Encyclopedia Online) She died in the sinking. Annie believed that the love that drew her to Christ would draw the people of Janjgir as well. A century later, she is remembered for her faith and what she has done.