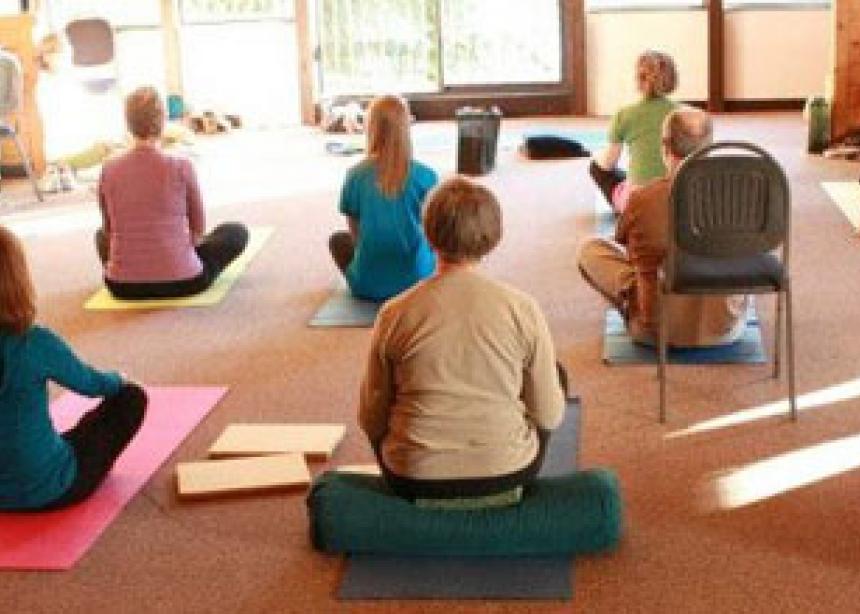 Determination to exercise more, or to improve one’s spiritual life, are on many people’s lists as they begin a new year. Thirty people who met at Camp Squeah from Jan. 11 to 13 found a way to do both through a retreat with the theme of “Breath of God” and the practice of yoga from a Christian perspective.

Angelika Dawson of Abbotsford, B.C., who spearheaded the retreat, had taken up yoga at her local recreation centre over a year ago, to increase her physical flexibility and strength. She loved the meditation and breathing exercises, but wasn’t always comfortable with the secular direction of imagining peace and light, or the distracting music.

“I meditate on God/Jesus/Holy Spirit when I meditate, and I began to wonder what it would be like to do yoga in a Christian environment,” Dawson said. “That’s really where the idea was born, and then it wasn’t much of a leap to think about doing a retreat at Squeah, which is one of my favourite places on earth.”

Dawson was aware that yoga is often suspect among Christians due to its association with eastern religions such as Hinduism and Buddhism. “I wondered if other Christians avoided yoga because they felt it wasn’t something a Christian could do,” she said. “I thought, if we could offer a retreat from a Christian perspective, then it might help other Christians discover the value of yoga as a physical/mental/spiritual practice, loving God with heart, soul, mind and strength.”

Realizing the idea could be controversial, Dawson first approached the camp director and got approval for the idea from the camp board. She contacted Laura Loewen, the seniors pastor at Emmanuel Mennonite Church, Abbotsford, who had been introduced to yoga when she pastored a Mennonite congregation in Montreal years ago. Loewen’s mentor, a Catholic priest, knew of a Christian yoga instructor in Vancouver, Ingrid Hauss, who agreed to lead the weekend at Squeah. It was important to the organizers that the instructor be a Christian, while respecting the eastern roots of yoga, and, after meeting Hauss, they knew she would fit the bill.

The weekend drew both women and men from Mennonite and other churches, both those who were experienced in yoga and first-timers. Hauss led the group through a series of body positions while reciting the Lord’s Prayer. Each morning began with stretching, using prayer and meditation as a guide.

Yoga sessions incorporated the idea that humans are fearfully and wonderfully made in the image of God. Free time allowed participants to reflect and relax through nature and fellowship. A Sunday worship service led by Loewen included communion, handwashing and worship through movement.

Participants responded enthusiastically with comments of, “Please, please, please do this again!” and, “Can we do it more often?” One man said he came to the retreat because “I worship in my head and I want to learn how to worship in my body.” Another participant commented that she didn’t think she could easily get back to traditional “up front”-centred worship that didn’t involve her whole body.

“It was a wonderful way of quieting and coming to a quiet centre, to God, through movement,” Loewen said of the experience.

Dawson agreed that the yoga retreat, a “stretch” for most Mennonite Christians, was indeed a valuable experience. “Personally, it confirmed for me that I can bring my Christian faith to this practice,” she said. “What a practice such as yoga does is to help us be aware of meditation as a holistic worship practice, that we worship our Creator God, the Son of God, the Breath/Spirit of God, with our heart, soul, mind and body.”

While at seminary I attended a few Doxa Soma sessions at a nearby retreat centre, which incorporated yoga postures with Christian prayer and Scripture. Visit http://www.doxasoma.com to learn more.

I am impressed to read the article on Exploring mind, body and soul connections by Amy Dueckman.

I have no problem with bringing our relationship of Christ into this meditative body/mind/soul environment.

Thanks, Angelika, for spearheading this.