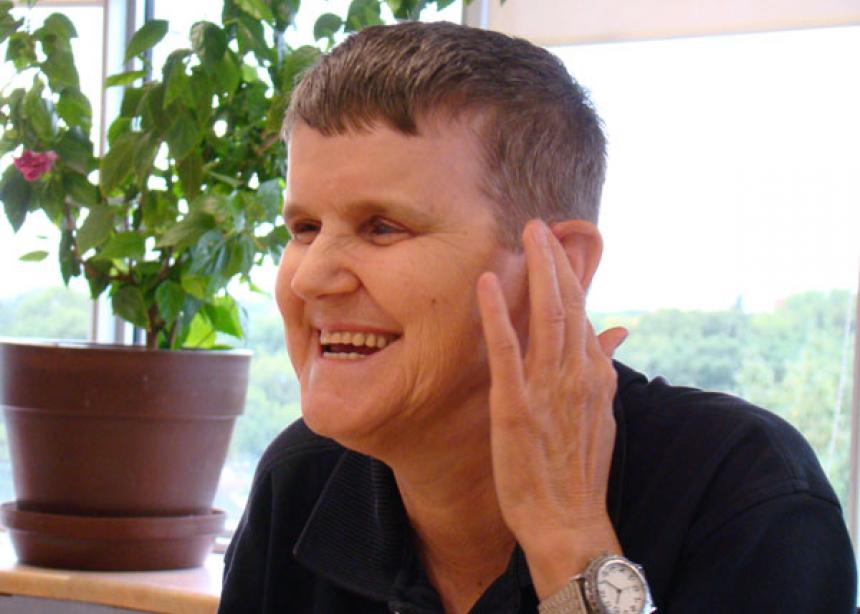 Katie Goetz, a church sister, asked if we could talk. Something was bothering her.

As we drank coffee on a patio outside a McDonald’s restaurant, she told how she had been the target of evangelists who tried to heal her by prayer. They were from a different denomination, but Katie knew them socially and when they asked if they could pray with her, she invited them into her apartment.

It quickly became clear the couple intended to restore sight to Katie, who is legally blind. They put an open Bible on Katie’s lap, and the husband paced back and forth, enthusiastically calling on God for a miracle.

“He was so loud, I think the neighbours could hear him,” Katie related later. The wife touched Katie’s shoulder and uttered sounds that were unintelligible to Katie. After several minutes of the wife speaking in tongues while the husband forcefully directed God to use his healing powers, they asked Katie to read the Bible on her lap. She couldn’t. The husband then told Katie “unconfessed sin” was blocking the miracle. They urged her to search her life, and repent.

Before they left, they told Katie they would continue to pray and they pledged her vision would return in one week. Several weeks later, Katie hadn’t heard back from the couple. That perturbed her. They had promised her a miracle within a week, but they didn’t care enough to check back and see whether it happened.

Katie is a life-long Mennonite Christian and her strong faith wasn’t shaken. But she was worried that such tactics could repel non-Christians or new Christians, especially when promised miracles didn’t happen.

“Instead of leading people to the Lord, they could be turning people off,” she worried.

Personally, I feel it was grimly ironic they chose Katie for such imperious methods because, as an evangelist herself, Katie is tactful, full of fun and effective. Katie, who is a church deacon, regularly volunteers to connect with people on the edge. For example, she specializes in meeting people who have no interest in Christ but randomly ring her church for food or money while they await their next government cheque.

I have been with Katie on more than dozen such ministry calls and I admire the sensitivity and joy she brings to these strangers. She always meets people face-to-face, in their home if possible. She usually arrives with a box of Tim Horton’s doughnuts as a social gesture, and the modest $30 grocery-store gift certificate that her church provides to strangers who are hungry. More importantly perhaps, Katie also brings high spirits and a light manner.

As soon as she’s inside the door, she jokes about her blindness to put everyone at ease (“I couldn’t see a parking spot but, that’s okay, they don’t let me drive anyway”). The content of the conversation varies with the circumstances, but there are some constants. Katie does more listening than talking, and her manner is always respectful, even to one fellow who smelled of booze at 10 a.m. She talks gently about the glory of God, going as far as her hosts are interested. She offers information about their closest neighborhood church even if it’s not Mennonite, and gives them a three-page guide to local social services. She usually gets out her harmonica, which is always in her packsack next to her collapsible white cane, and plays a brief medley of familiar church hymns, but she doesn’t play so long that it gets tedious.

Before leaving, she always asks if she can pray. Careful not to put her hosts on the spot, she doesn’t ask to pray “with” them, but to pray “for” them. They always say yes. When Katie prays, it’s clear that she has been listening closely to the needs of her hosts, both spoken and unspoken.

Katie’s never spoken in tongues. She would never bellow directions at God, or accuse someone of having “unconfessed sin.”

But I’m sure of one thing. When Katie visits, she reflects a God who is welcoming, loving and joyful.

Carl DeGurse is a member of Douglas Mennonite Church in Winnipeg. 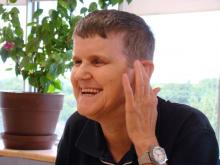