January 29, 2014 | God at work in Us | Number 3
Story and Photo by Evelyn Rempel Petkau | Manitoba Correspondent 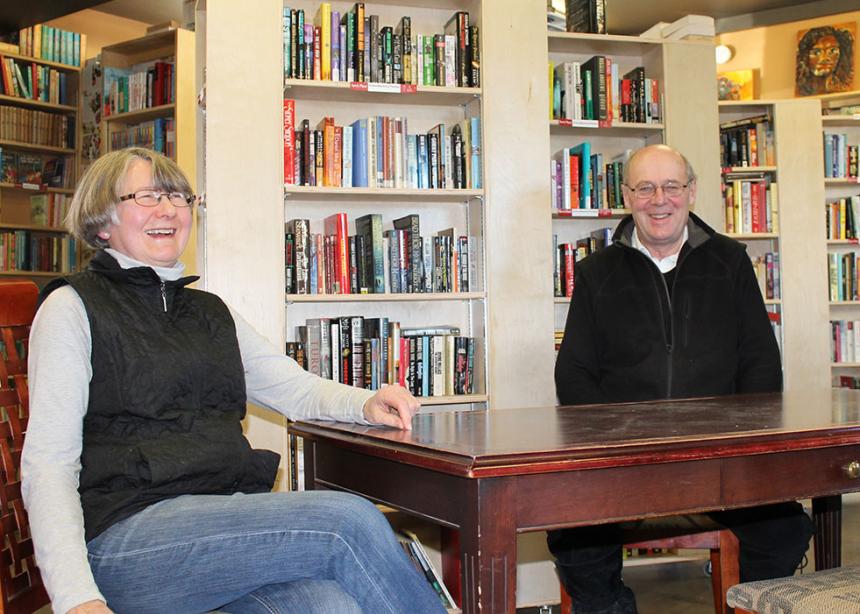 Ever since Sam’s Place opened in 2009, Klassen has spent her retirement from teaching volunteering full-time at this used bookstore, café and music venue, an activity of Mennonite Central Committee (MCC) Manitoba.

Neufeld walked in several weeks later and bought three rare books of poetry for a few dollars. When he returned later to inform Klassen that his research showed the books were valued at several hundred dollars, Klassen invited him to join her in working with the donated books.

Both of them have been volunteering, without a break or a vacation, ever since.

“We average 20 boxes a week, often more, in donations. That would be a conservative estimate,” says Neufeld, who has listed well over 4,000 of the donated books on AbeBooks, an online marketplace for used, rare or out of print books, as well as new ones.

For her part, Klassen does the shipping. “It used to be we shipped books mostly to the U.S., but now probably as many—or even more—go to Canadian destinations,” she says. “Our latest quarterly report shows we sold books all over the U.S. and Canada, some to colleges, to other booksellers, to European destinations, including the Mennonite Amsterdam Seminary, and many other countries, including Australia.”

Donations and sales have grown to the point where book sales in the café have more than covered the mortgage for the last few years. Internet sales are more specialized and supplement those sales.

The books come from all over. Increasingly church pastors from mostly Mennonite churches, but also a growing number of other denominations, are donating their libraries after retiring, Klassen and Neufeld explain while meandering through a tight labyrinth of floor-to-ceiling shelves of books in the storage space above the café.

Neufeld and Klassen note some rare finds. “We sent a Low German Bible to Korea, to someone with a Korean name,” says Neufeld.

They recently came across a Russian songbook dating back to approximately 1910, when the Russian government wanted these songbooks placed in the schools to “Russify” the Mennonites, who resisted, and the songbooks disappeared.

Four bound tomes of the New York Times contain complete volumes from the years 1915-18. “There’s a letter to the editor from George Bernard Shaw in there written during the Russian Revolution,” says Klassen.

Recently, a book written and autographed by Martin Luther King, Jr. was donated.

While not all books are saleable, each donation is handled with respect and care, stress Klassen and Neufeld

“People who have books, like books,” says Klassen. “They bring them here if they think they have some value or if they want their books looked after. People know we will look after them.”

No books are trashed. If they are deemed unsalable, they are recycled. The book spines are cut off and made into bookmarks, which are sold as a fundraiser for MCC. Several groups of young people with learning challenges come once a week to assist with the recycling work.

“We have many opportunities to share books with other groups,” says Klassen.

Sam’s Place has sent a pallet of children’s books to South Africa through MCC workers there. Klassen and Neufeld have carefully screened German books to send to Paraguayan libraries, children and adult books to libraries in the far north of Canada, and recently a book about pasta from the Canadian Grain Commission was shipped to Florence, Italy, for more than $80.

Neufeld, who has a Ph.D. in European history, spent six months learning from booksellers in Toronto before coming to Winnipeg. Both he and Klassen have learned a great deal about the value of books since volunteering at Sam’s Place.

“Our Mennonite books sell well,” says Neufeld. “We have established ourselves as serious booksellers of out of print books, theological books and Mennonite books. We have a real advantage between the two of us knowing German, Russian and Ukrainian in the world market that deals with Mennonite books.”

“It’s taken off and we want to keep it going,” says Klassen.

It’s that sense of commitment that keeps these two volunteers so dedicated that they don’t stop for a vacation. 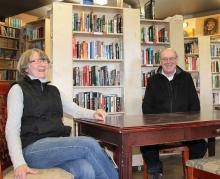 Volunteerism like that of Mary & James is what has been such a blessing to MCC Manitoba over it's 50 years of service "in the name of Christ". God bless them both for this marvellous work.

The number of boxes of books coming in vary with the seasons of the year. To make sure that scarce space is shared fairly, 5 boxes a month, roughly, 5 shelves, would be a way clear larger libraries, when people are moving or retiring.
James Neufeld